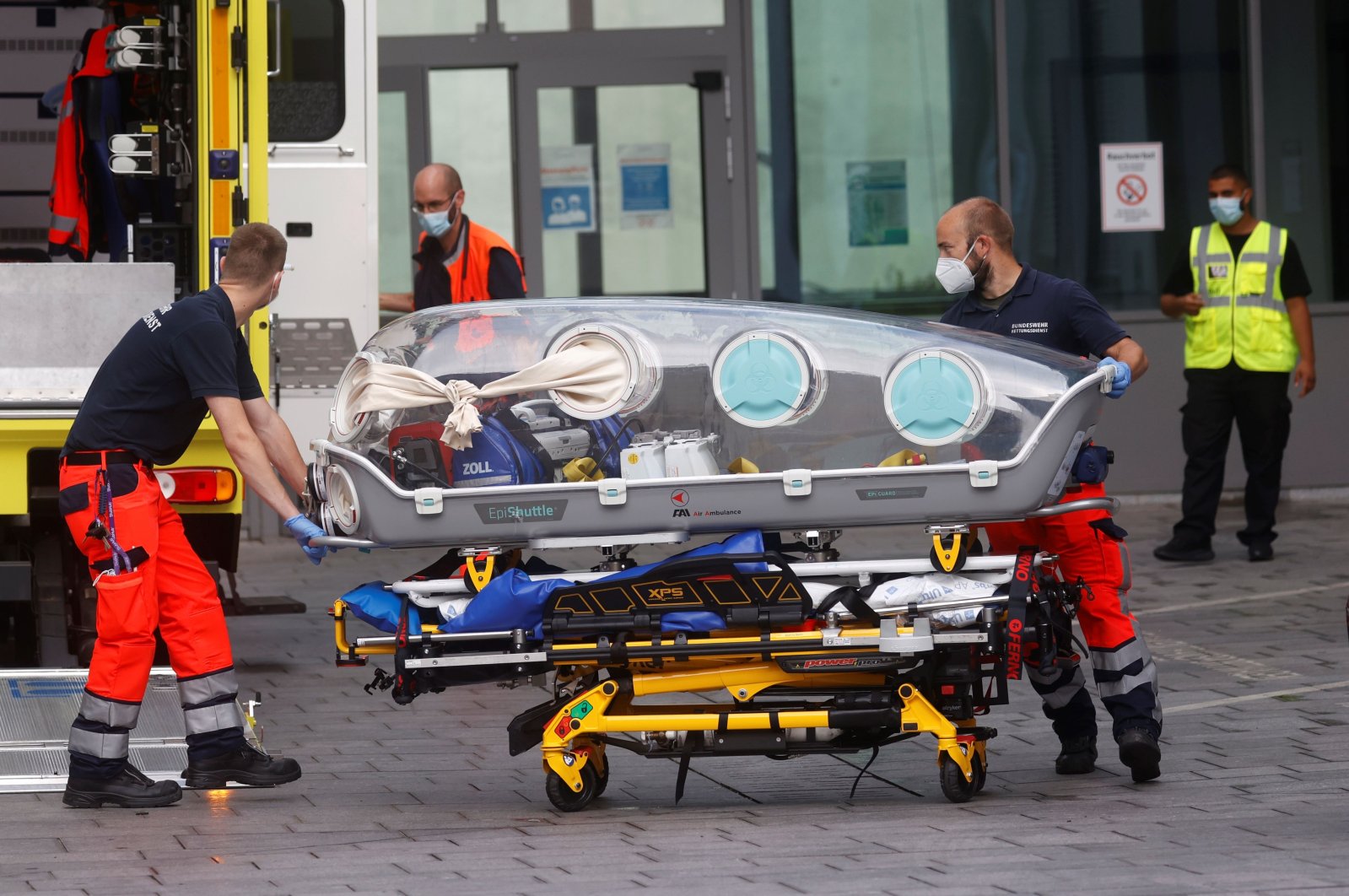 Tests conducted on Russian dissident Alexei Navalny at a German hospital indicate that he was poisoned, but doctors said Monday they do not believe his life to be at immediate risk.

The Charite hospital said in a statement that the team of doctors who have been examining Navalny since he was flown from Siberia and admitted Saturday have found the presence of “cholinesterase inhibitors” in his system.

Cholinesterase inhibitors are a broad range of substances that are found in several drugs but also in pesticides and nerve agents. However, doctors at Charite said at the moment the specific substance to which Navalny was exposed is not yet known.

“The patient is in an intensive care unit and is still in an induced coma. His health is serious but there is currently no acute danger to his life,” the hospital said in a statement.

Navalny remained in critical but stable condition at the Berlin hospital, with special protection details on hand to ensure his safety, German officials said.

Berlin police and federal agents were posted at the downtown Charite hospital where the 44-year-old is undergoing treatment following his arrival in Germany after Chancellor Angela Merkel personally offered the country's assistance.

“It was obvious that after his arrival, protective precautions had to be taken,” Merkel's spokesman, Steffen Seibert, told reporters. “After all, this is a patient who, with a certain degree of probability, was poisoned.”

He wouldn't comment on Navalny's condition, but earlier in the day, Dirk Wiese, the German government's coordinator for Eastern European affairs, told public broadcaster ZDF he was “currently critical, but stable.”

“He is now receiving the best possible treatment,” Wiese said.

Navalny's supporters believe that tea he drank was laced with poison – and that the Kremlin is behind both his illness and a delay in transferring him to Germany.

Russian doctors have said, however, that tests have shown no traces of poison in his system. The Kremlin has not yet commented on the allegation.

Navalny’s team last week submitted a request in Russia to launch a criminal probe, but as of Monday, Russia’s Investigative Committee still has not opened a case, Navalny's spokeswoman Kira Yarmysh said.

Ilya Yashin, an opposition politician in Moscow and a close ally of Navalny, in a video statement Monday urged Russia’s law enforcement to investigate “an attempt at a life of a public figure” and to look into the possible involvement of Russian President Vladimir Putin.

“It is Putin who benefits from these endless assaults,” Yashin said.

U.S. Ambassador to Russia John Sullivan said the Navalny case would be on the agenda for Deputy Secretary of State Stephen Biegun’s visit to Russia that begins Tuesday.

“With Alexei Navalny in a hospital in Berlin, our dialogue with Russia must include reemphasizing the importance of free speech and civil society,” he told reporters.

If Navalny is found to have been poisoned, “that would represent a crucial moment in Russia," Sullivan said.

"The Russian people deserve to see that anybody who would have been involved in a matter like that be held accountable," he said.

Navalny was flown to Germany on Saturday from Siberia after much wrangling over whether he was stable enough to be transported.

After his arrival, hospital spokeswoman Manuela Zingl said he would be undergoing extensive diagnostic tests and that doctors would not comment on his illness or treatment until they were able to evaluate the results.

On Sunday, Navalny’s wife, Yulia Navalnaya, and aide Leonid Volkov visited the Russian opposition leader in the hospital but didn't speak to reporters.

Navalny, a politician and corruption investigator who is one of Putin’s fiercest critics, fell ill on a flight back to Moscow from Siberia on Thursday and was taken to the hospital in the city of Omsk after the plane made an emergency landing.

“If we had found poisoning confirmed by something, it would have been much easier for us,” said Anatoly Kalinichecnko, deputy chief doctor of the Omsk Ambulance Hospital No. 1, where Navalny was treated.

“But we received a final conclusion from two laboratories that no toxic chemicals that can be considered poisons or by-products of poisons, were found.”

The hospital's chief doctor, Alexander Murakhovsky, rejected allegations made by Navalny’s team that doctors in Omsk had been acting in coordination with Russia’s security services.

“We were treating the patient, and we saved him," Murakhovsky said Monday. “There wasn’t and couldn’t be any influence on the patient’s treatment.”

He wasn’t able to identify men in plainclothes spotted in the hospital last week who the politician’s allies said were law enforcement and security service agents.

“I can’t say who they were,” Murakhovsky said.

Kremlin spokesman Dmitry Peskov said last week he didn’t know anything about security service operatives being present at the hospital.

“We in the presidential administration can hardly be interested in who is present in the office of a chief doctor in a hospital in Omsk,” Peskov said Friday.

Last year, Navalny was rushed to a hospital from jail where he was serving a sentence on charges of violating protest regulations. His team also suspected poisoning then. Doctors said he had a severe allergic reaction and sent him back to detention the following day.