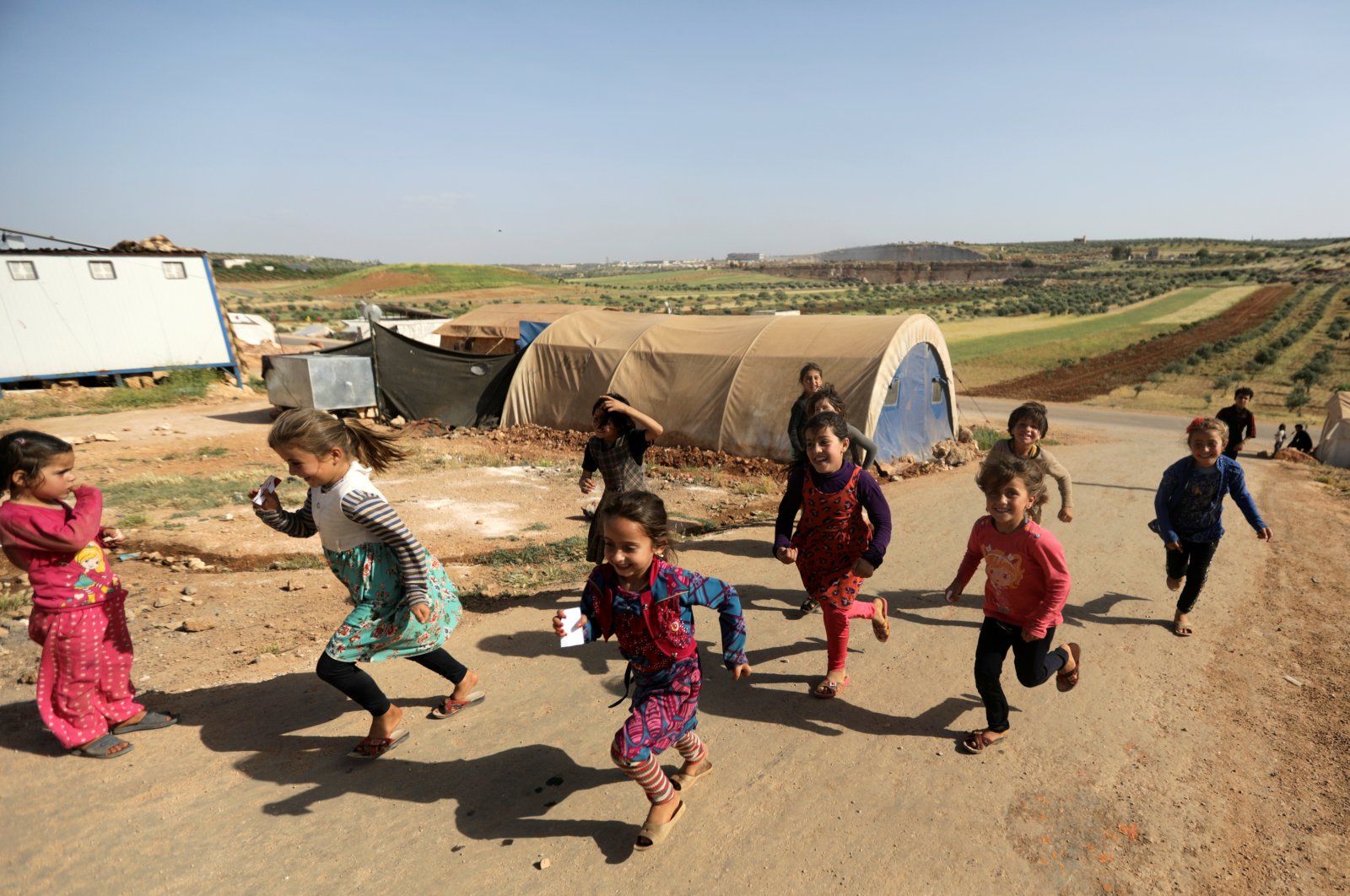 Internally displaced Syrian girls run together near tents at Teh camp in northern Idlib, Syria, May 5, 2021. (Reuters Photo)
by DAILY SABAH WITH AA May 23, 2021 3:44 pm
RECOMMENDED

Syria's Bashar Assad regime has forcibly displaced some 30 families from the southern province of Quneitra province to northern Idlib, which is under the control of the opposition.

Some 150 people have been evicted from Quneitra, which is adjacent to the Israeli-occupied Golan Heights region.

The families were placed in briquette houses built by Turkish nongovernmental organizations (NGOs) in Idlib.

The houses were built as part of the "We are together, We are siding with Idlib" aid campaign. It was launched on Jan. 13, 2020, in coordination with Turkey's Disaster and Emergency Management Authority (AFAD) and received major support from other Turkish aid organizations, including from the Turkish Red Crescent (Kızılay), the Humanitarian Relief Foundation (IHH), the Sadakataşı Association, the Türkiye Diyanet Foundation (TDV) and many others.

"They want to settle Hezbollah and Iranians in our homes. We had been under blockade for about three years. They started to detain our young people," Mohammed Said, one of the displaced civilians, told Anadolu Agency (AA).

"They besieged us. They did not leave us alone and forced us to migrate. I hope the Assad regime will fall and we will return to our country," Um Muhammed, another civilian who took refuge in Idlib, said.

After imposing a blockade and carrying out massive attacks, the Assad regime completely took over Quneitra in mid-2018.

More than 10,000 people had been evacuated from Daraa and Quneitra to regions in northern Syria in July 2018.

For years, the Assad regime has ignored the needs and safety of the Syrian people, only eyeing further gains of territory and crushing the opposition. With this aim, the regime has bombed vital facilities, including schools, hospitals and residential areas, causing the displacement of almost half of the country’s population while adopting policies to make their lives more difficult.

Idlib falls within a de-escalation zone forged under the agreement between Turkey and Russia after Turkey launched Operation Spring Shield upon the Assad regime's attack.

The lives of the Syrian people dealing with numerous difficulties in rural Idlib's tent camps have become much harder due to the ongoing pandemic. As the humanitarian catastrophe in the region reaches new heights, people try to survive by taking shelter under trees or shaky tents built on mud and puddles. Many Turkish NGOs and state agencies continue to provide vital humanitarian aid and conduct humanitarian efforts in the region hosting nearly 4 million people.

Most recently, some 561,746 civilians also returned to their homes voluntarily despite violations of the cease-fire that was struck between Turkey and Russia in March 2020 in Idlib, Mohammad Hallaj, the director of Syria's Response Coordination Group, stated last month.

At least 75 attacks by the Assad regime and its allies have been recorded since the cease-fire, a human rights group told Daily Sabah.