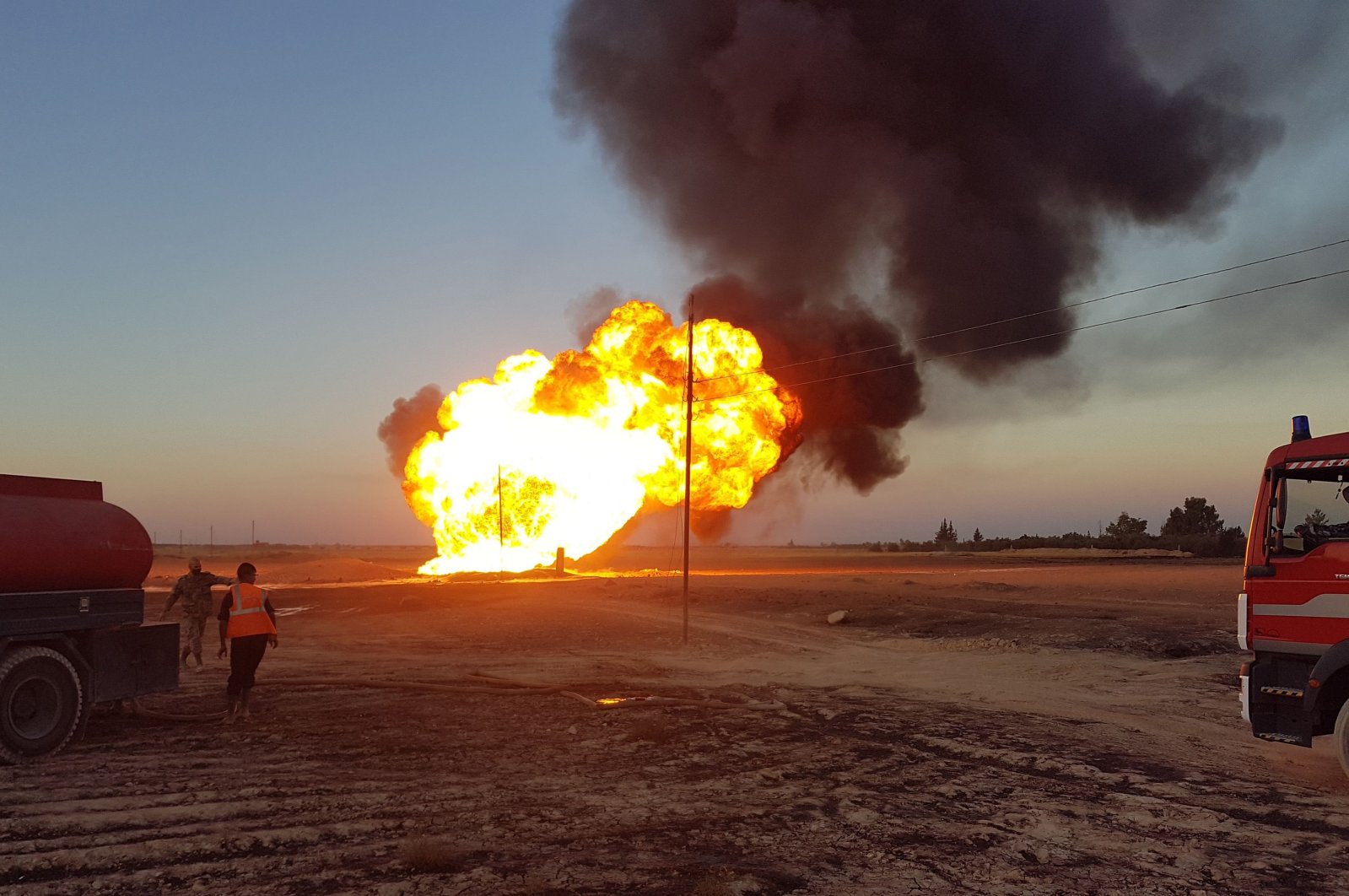 Syrian firefighters put out a fire at a pipeline between the areas of Adra and Dumair in the Damascus area, Syria, Aug. 24, 2020. (Syrian Arab News Agency handout via AFP Photo)
by ASSOCIATED PRESS Aug 24, 2020 6:46 pm
RECOMMENDED

An explosion early Monday struck a gas pipeline in a Damascus suburb, causing a huge fire and cutting off electricity throughout Syria, state media reported, citing the regime's electricity and oil ministers.

United Nations-led talks in Geneva including the Syrian regime, opposition and civil society were meanwhile put “on hold” after three delegates tested positive for COVID-19.

The oil minister, Ali Ghanem, said the explosion struck the line that feeds three power stations in southern Syria, calling the incident “a cowardly terrorist act.” Ghanem spoke to journalists who visited the blast site near the suburb of Dumair, northeast of the capital.

Syria’s oil and gas infrastructure has been hit over the past years by acts of sabotage, but no one has ever claimed responsibility for such attacks. The nine-year civil war, which has killed more than 400,000 people, has also badly affected oil and gas fields, many of which are outside regime control.

The state news agency SANA quoted Electricity Minister Zuhair Kharbotli as saying the explosion on the “Arab Gas Pipeline” occurred after midnight Sunday between the northeastern Damascus suburbs of Adra and Dumair.

He said it was the sixth time the pipeline was hit. Technicians are working to fix the problems and electricity should be restored in the coming hours, he said.

Ghanem, the oil minister, said the pipeline was attacked in this same desert area six times in recent years. He said it pumps some 7 million cubic meters of natural gas to power stations that supply much of Syria with electricity.

U.S. Syria envoy James Jeffrey said the attack was “almost certainly a strike" by the Daesh terrorist group. The terrorists were driven from the last bit of territory under their control in Syria last year, but sleeper cells continue to carry out sporadic attacks.

Jeffrey said there has been an upsurge in Daesh activities in desert areas in eastern and southeastern Syria near the border with Jordan and Iraq.

The U.S. envoy was in Geneva for the start of U.N.-mediated talks involving the Syrian regime, opposition and civil society. They had planned to discuss a possible new constitution, part of a process has produced few concrete results so far.

Daesh terrorists have claimed responsibility for attacks in recent months that killed scores of regime troops as well as members of the U.S.-backed SDF, led by the YPG/PKK terrorist group.

In December, near-simultaneous attacks believed to have been carried out by drones hit three regime-run oil and gas installations in central Syria. One of the attacks targeted the oil refinery in the central city of Homs.

Syria has suffered fuel shortages since last year. Western sanctions have blocked imports, while most Syrian oil fields are controlled by the YPG/PKK in the country’s east.

Information Minister Imad Sara said the aim of these attacks is to pressure regime supporters to demand that the state make concessions to its rivals. He added that “what was not taken by war will not be taken by dialogue or explosions.”