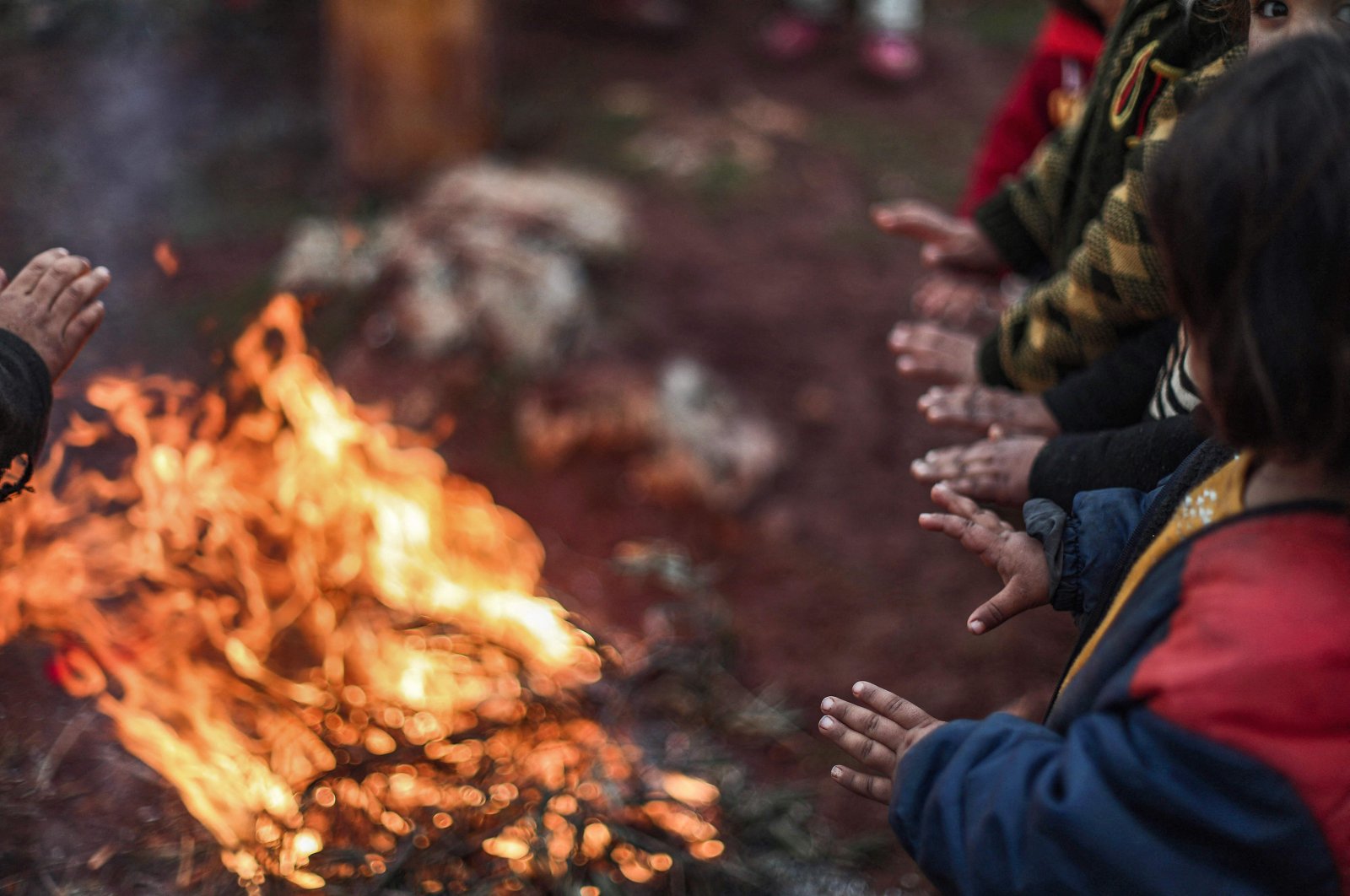 Children warm up around a bonfire of burning olive branches at a make-shift camp for the displaced, near the village of Babisqa, Idlib, Syria, Dec. 17, 2021. (AFP Photo)
by French Press Agency - AFP Dec 22, 2021 9:39 am
RECOMMENDED

"My children are cold," a mother living in a displacement camp in Syria’s northwestern Idlib province said, explaining that her children gather scraps of garbage to burn and stay warm amid the bitter winter.

"Every morning I wake up and find that my children aren't near me," Umm Raghad told Agence France-Presse (AFP) from a displacement camp in the last opposition bastion of Idlib.

"They go out early to collect scraps of plastic from the streets, such as bags and shoe soles," the mother-of-three said, her face half-covered by a thick black scarf.

Winter usually spells tragedy for northwest Syria, home to more than 3 million people, nearly half of whom have been displaced by a decadelong war that has killed nearly half a million.

In makeshift camps in Idlib, streets turn muddy, tents leak and inhabitants die of hypothermia or in fires caused by unsafe heating methods.

Widowed by war, Umm Raghad moved to the Kafr Arouk camp three years ago to escape fighting in other parts of Idlib province.

The harsh winter is unbearable for her family, which doesn't have enough money for even the most basic of necessities, she said.

"I can't afford to buy a furnace or to feed my children," Umm Raghad said.

"My children are cold. They don't have proper clothes."

Snowfall and subzero temperatures are not unusual in northwestern Syria.

Aid agencies often help insulate tents and provide blankets and clothes, but donor funding is struggling to keep up with growing demand.

According to the United Nations refugee agency UNHCR, $182 million is required to finance growing needs in winter assistance across Syria this year but only half of the amount has been secured.

In the Kafr Arouk camp, a rudimentary furnace set up in Umm Raed's tarpaulin tent attracts dozens of people looking to keep warm.

Last year, a group of people donated the heater to Umm Raed, whose eight children include three with special needs.

The 45-year-old can't afford coal or wood, so she makes do with scraps collected by Umm Raghad's children and other neighbors who forage for hours across the camp's sludgy grounds.

"Our neighbors all gather here in my tent to stay warm," she told AFP. "It gets crowded with around 15 people crammed in one tent, where they eat and drink and sit."

Last month, Doctors Without Borders, or MSF, which provides support to dozens of camps in Syria's northwest, warned that unsafe heating methods are putting people at higher risk of contracting respiratory diseases and complications related to smoke inhalation.

"Respiratory illnesses are consistently one of the top three illnesses reported in our facilities in the northwest," it said.

Umm Mohammad, displaced nine years ago from the northern city of Aleppo, is among the people risking their lungs to stay warm.

Inside her tent in an Idlib camp, the mother of three burned twigs and paper to feed a small furnace emitting white fumes.

"The smell is strong and there is a lot of smoke," she said.

"Yesterday, my chest started hurting and I wanted to go to see a doctor but I couldn't afford it."

Nearby, Abu Hussein looked on as a group of children surrounded an outdoor fire fed by nylon bags and scraps of wood.

"When we light a fire inside, where it's crowded and smoky, and there are a lot of children, it is leading to suffocation," the 40-year-old father of 10 told AFP.

On top of that, his tent is leaking, causing rain to drip on his children when they are asleep, he said.

"Sometimes, we stay up all night ... putting up plastic bags so rain doesn't fall on their heads."