Tents of at least 2,000 Syrians flooded by heavy rains in Idlib 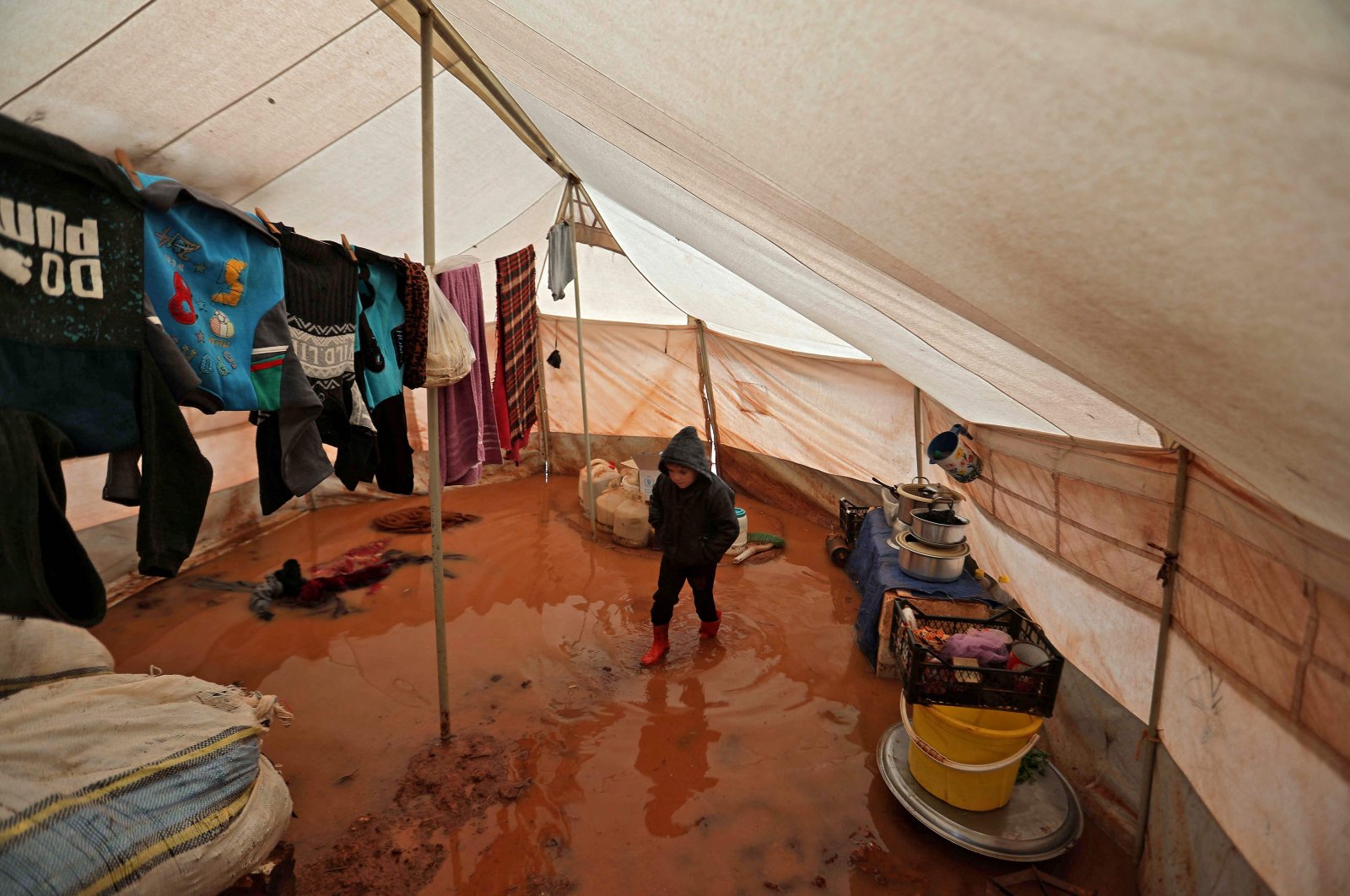 Adding to the difficult conditions in which thousands of displaced Syrians live due to ongoing violence in the country, rain has flooded their fragile makeshift tents in the midst of winter

Heavy rains that struck northwestern Idlib province for days have flooded thousands of tents in the displacement camps, as those trying to survive continue to face worsening humanitarian conditions.

Thousands of families that were affected by the rains are now hoping for a helping hand after their only homes were destroyed.

Mohammad Hallaj, director of Syria's Response Coordination Group, told Anadolu Agency (AA) that the roads to 104 camps have been closed due to the floods.

Saying that more than 500 tents have become so damaged that they cannot be used anymore, Hallaj added that at least 3,742 families have been affected, while the tents of 2,145 have been flooded.

Fatima Jassem, who fled the Bashar Assad regime and is currently living in Idlib’s Zifir Camp, stressed that everyone in this camp is in desperate need of help.

“In the nights we cannot stay in our tents. Our tents take in water. My husband is old, he cannot move in the cold. Hunger from one side, the rains on the other ... no one except for Allah knows our conditions,” Jassem said.

“We need all kinds of help. We burn the leftover plastic bags with which I gather food,” she added, saying that especially food, clothing and firewood are needed.

Another resident from the same camp, Ahmed Mohammed, said similarly that the living conditions are bad and that the people cannot sleep on rainy nights.

Mohammed underlined that the infrastructure problem has to be solved as soon as possible.

“We have no tarps to protect our tents from the rain.”

He said that 50 families live under difficult conditions in the camp.

“We want to escape this suffering. My only wish is to return home. I want to be able to provide my children with basic necessities and earn money to buy bread for them.”

For years, the Assad regime has ignored the needs and safety of the Syrian people, only eyeing further territory gains and crushing the opposition. With this aim, the administration for years has bombed civilian facilities such as schools, hospitals and residential areas, causing the displacement of almost half of the country's population.

The situation for the people in Idlib worsened when the Assad regime, backed by Russia, launched an offensive on the province, causing the largest one-time displacement in the history of the Syrian civil war and a massive humanitarian tragedy, according to the U.N.

Frequent bombings and shelling have put nearly 50% of health facilities out of service, just as the Syrian people need them the most amid the coronavirus pandemic. Living in overcrowded tent camps or even out in the open in safe areas near the Turkish border, many are struggling to meet even their basic needs.

Besides the bombings of the regime and Russia, civilians also face a deteriorating situation in makeshift camps amid winter conditions and heavy rains, flooding the tents.

The White Helmets civil defense group also touched on the issue, saying on Tuesday that: “With the onset of winter, rainfall, storms, and flooding have destroyed the tents of tens of civilians who have already been displaced many times over the course of nearly a decade of war. Yesterday, heavy rains led to massive damage in camps that shelter more than 1.5 million.”

It added that the “solution that remains to end their tragedy is by ensuring the safe return to their homes and holding the Assad regime accountable for its crimes.”