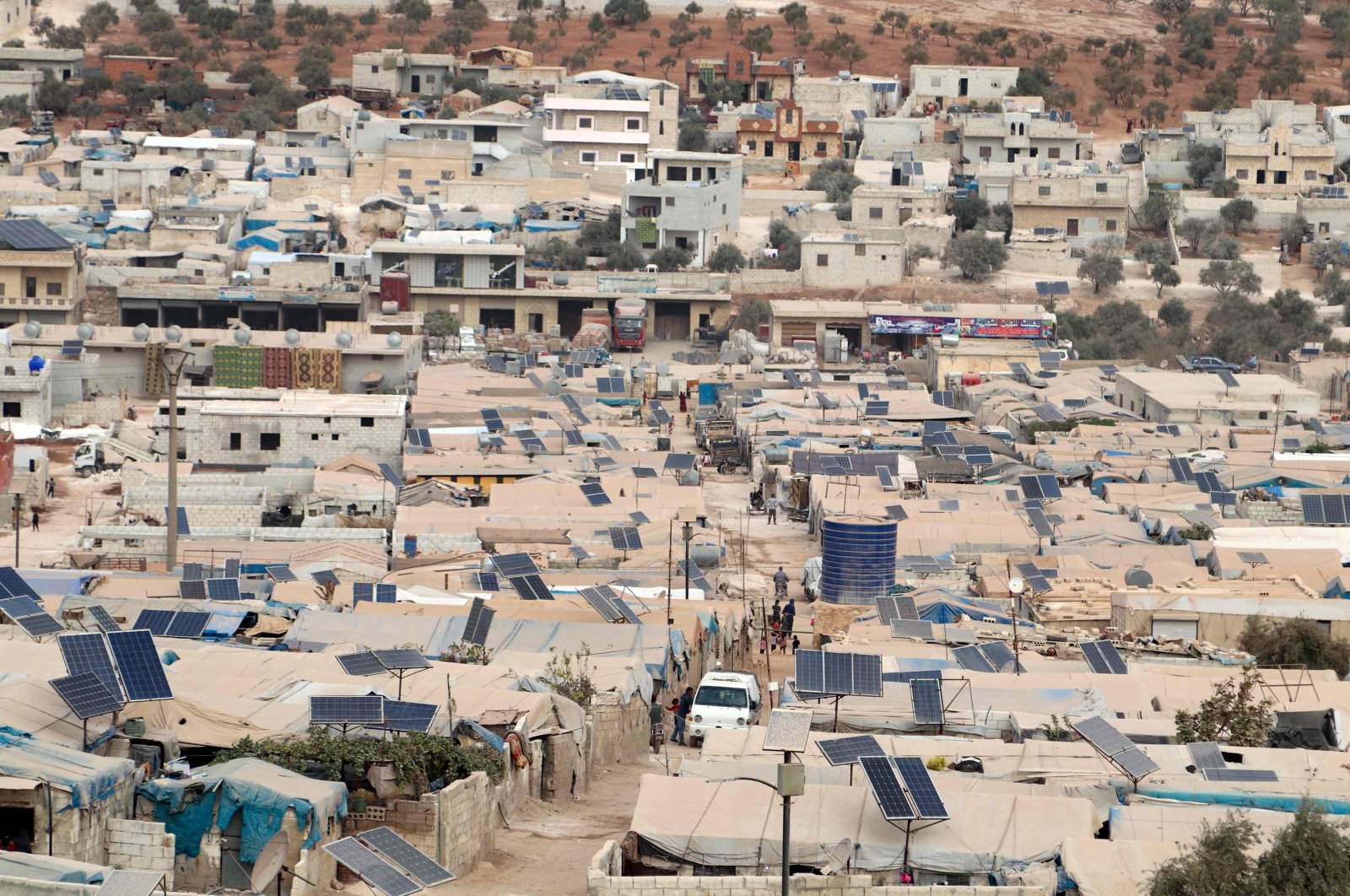 This picture shows a partial view of an overcrowded displacement camp near the village of Qah near the Turkish border in northwestern Idlib province, Syria, Oct. 28, 2020. (AFP Photo)
by daily sabah
Nov 01, 2020 12:23 pm

After years of war, no solution in sight and a daily struggle to survive without even basic necessities, displaced Syrians in the country's northwest now live with the concern of contracting COVID-19

Hassan Sweidat is terrified he will catch the virus in the overcrowded displacement camp in northwestern Syria that he calls home. His fear has been amplified as medical staff in the region have started to fall ill.

In an informal settlement in Idlib – the country's last major opposition stronghold, Sweidat said he and other displaced Syrians did not stand much chance against the disease.

"We live in a camp all crammed in together. If someone talks to his family, all the neighbors can hear it," said Sweidat, who is in his 40s and has a health condition.

If someone gets sick, "it's hardly the disease's fault," the father of six added.

Humanitarian workers fear a further rise in coronavirus cases would be disastrous in northwestern Syria, where almost 1.5 million people, displaced by the bombings of Russia and the Syrian regime, live in overcrowded camps or shelters, often with poor access to running water.

In the encampment in Qah, a few makeshift solar panels shimmer on the canvas roofs of endless tiny breeze-block rooms where families have settled after being uprooted by war.

Resting after helping a friend build a small room to serve as a shop, Sweidat said he hopes he does not have to take anyone in his family to the local hospital.

"Hospitals are overcrowded. People have started to be scared of doctors and nurses, who they think might be infected, with all the sick people going to them."

Sweidat, who fled his home seven years ago, especially fears catching the coronavirus as he suffers from a chronic liver condition.

"One of my relatives got it a while back, and I'm really scared because I have no immunity," he said.

Local and international humanitarian workers are working to contain the virus, but cases are still on the rise.

The health authorities in northwest Syria have officially announced 5,075 cases of COVID-19 so far, including 42 deaths.

Of those, more than 860 cases have been recorded among health care staff and almost 330 people in the camps, figures showed Wednesday.

Seated cross-legged on the floor, as she crushed small green olives one by one with a brick, 80-year-old Ghatwa al-Mohommad said she and her family felt like sitting ducks.

"We're scared of the disease, but we don't dare leave," she added.

"We're so confused about what we should do. If only God would have us die and end our misery."

Of the 3 million people living in Idlib, around half live in makeshift homes and tents after escaping the fighting during Syria's nine-year civil war.

The latest Russia-backed regime offensive on the region last winter killed around 500 civilians and forced nearly 1 million people to flee their towns and villages.

But he admitted that was "near impossible" in the hundreds of informal settlements dotting the region.

Few in the camps wear masks. Many cannot afford to buy face coverings or to change them regularly, let alone hand disinfectants.

For most, food, water, medicine and school supplies are far more important.

"The regime and Russian forces are responsible for displacing these people and for the disastrous conditions in which they now live," Naameh said.

Back in the camp, Mohammad al-Omar, 40, agreed that asking people to self-isolate in a tent city was not realistic.

"They tell us, 'Don't go out. Don't cause overcrowding.' But we live in tents barely half a meter apart," said the father of four, who was displaced by the conflict eight years ago.

"They give all of us who are older than 5 one mask as if that were enough. But it's not."

Omar, who works as the driver of a water truck, said he cannot stay inside the camp as he needs to earn money.