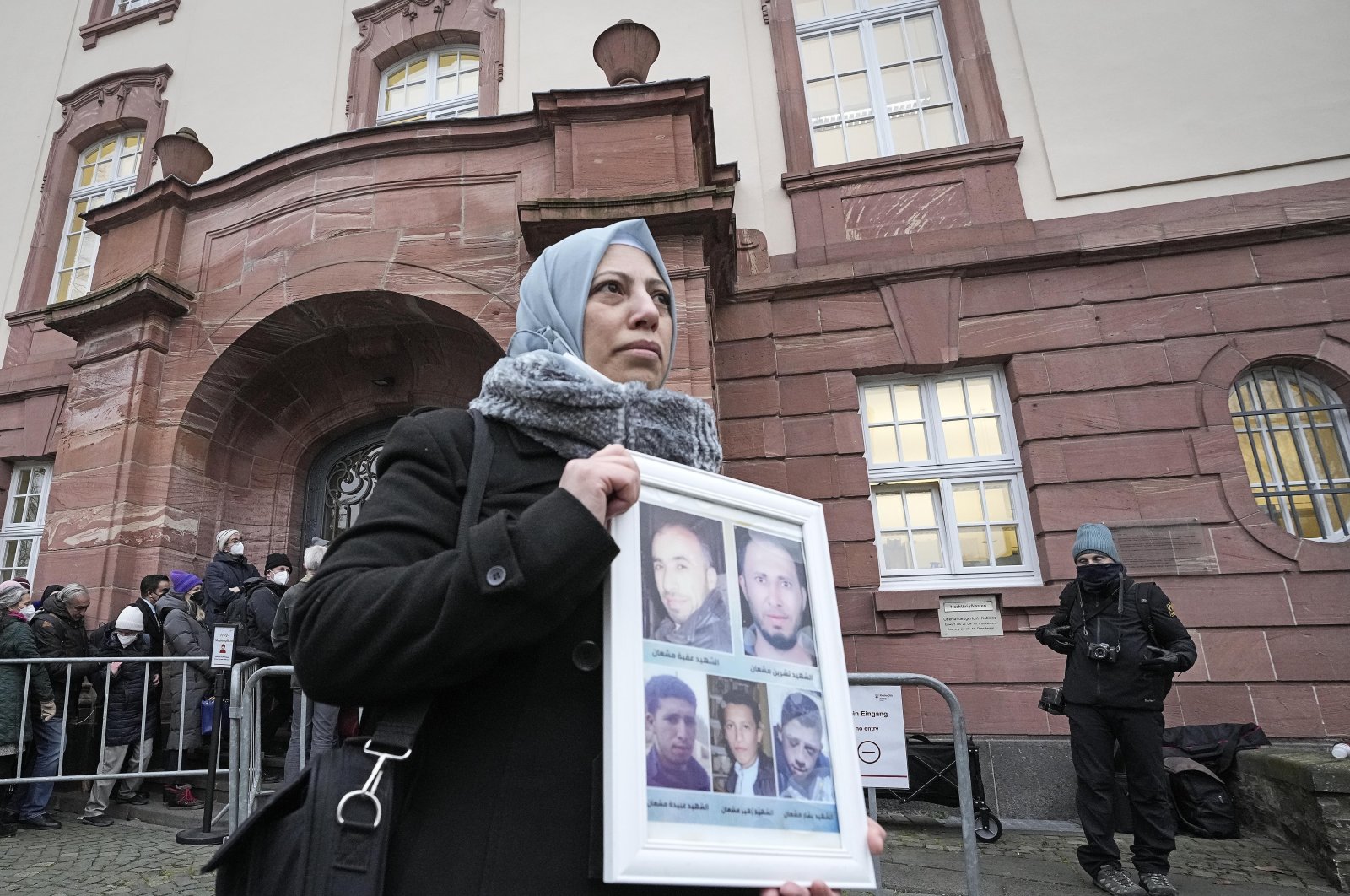 Yasmen Almashan holds pictures of her five brothers who died in Syria before the verdict was announced in front of the court in Koblenz, Germany, Jan. 13, 2022. (AP Photo)
by agencies Jan 13, 2022 12:52 pm
RECOMMENDED

A German court has convicted a former Syrian secret police officer working for the Bashar Assad regime of crimes against humanity for overseeing the abuse of detainees at a jail near Damascus a decade ago.

The verdict Thursday in the landmark trial has been keenly anticipated by Syrians who suffered abuse or lost relatives at the hands of the Assad regime in the country’s long-running conflict.

The Koblenz state court concluded that Anwar Raslan was the senior officer in charge of a facility in the Syrian city of Douma known as al-Khatib, or "Branch 251," where suspected opposition protesters were detained.

It sentenced him to life in prison, German broadcaster n-tv reported. His lawyers asked the court last week to acquit their client, claiming that he never personally tortured anybody and that he defected in late 2012.

German prosecutors alleged that Raslan supervised the "systematic and brutal torture” of more than 4,000 prisoners between April 2011 and September 2012, resulting in the deaths of dozens of people.

A junior officer, Eyad al-Gharib, was convicted last year of accessory to crimes against humanity and sentenced by the Koblenz court to 4½ years in prison.

Both men were arrested in Germany in 2019, years after seeking asylum in the country.

Victims and human rights groups have said they hope the verdict will be the first step toward justice for countless people who have been unable to file criminal complaints against officials in Syria or before the International Criminal Court (ICC).

Since Russia and China have blocked efforts for the U.N. Security Council to refer cases to The Hague-based tribunal, countries such as Germany that apply the principle of universal jurisdiction for serious crimes will increasingly become the venue for such trials, experts say.

Meanwhile, cases brought against loyalists of the Bashar Assad regime, who have engaged in violence and inflicted atrocities for a decade, are growing in Europe.

Germany has used the principle of universal jurisdiction, which allows a foreign country to prosecute crimes against humanity, including war crimes and genocide, regardless of where they were committed, after receiving complaints from Syrians who claim to have been tortured in regime jails.

Later that year, nearly 27,000 photos taken by a former Syrian military photographer known as Caesar, who documented torture and death in regime jails, were also turned over to German courts, according to German rights group the European Center for Constitutional and Human Rights (ECCHR).

In November 2017, the ECCHR announced that two new complaints of crimes against humanity and war crimes had been filed by 13 Syrians over alleged acts of torture.

Seven other Syrian men and women who claimed to have suffered or witnessed rape and sexual abuse in Assad's detention centers also submitted a complaint to German prosecutors, the group revealed in June 2020.

The trial of a Syrian doctor accused of torture, murder and crimes against humanity is due to start in Frankfurt on Jan. 19.

In September 2015, a Paris prosecutor also opened a preliminary inquiry against Assad's regime for crimes against humanity over allegations of abduction and torture.

The following July, the family of a Syrian doctor who died in a regime prison lodged a complaint in Paris over his torture and murder.

Another French court opened an investigation in 2016 into the disappearance of Mazen Dabbagh and his son Patrick, two French-Syrian nationals who had been arrested in Syria three years earlier.

France issued its first international arrest notices for Syrian intelligence officials in 2018 for "complicity in acts of torture" related to the case as well as "complicity in crimes against humanity" and "complicity in war crimes."

In April 2021, three nongovernmental organizations (NGOs) that had lodged civil complaints managed to get a probe opened into chemical attacks in 2013 blamed on the Syrian regime. The case, already filed in Germany, was lodged on behalf of victims of the 2013 attack and a 2017 attack using sarin gas.

In December 2021, a French-Syrian man was jailed, suspected of providing material to Assad's forces that could be used to make chemical weapons.

It is the first time that someone had been charged in France with supporting Assad's troops, judicial officials said.

In July 2017, a Spanish court rejected a complaint filed by a Spanish woman of Syrian descent against nine Syrian regime officials over the forced detention, torture and alleged execution of her brother in 2013.

Legal proceedings have also been launched in Austria, Norway and Sweden, which was in 2017 the first country to sentence a former soldier for war crimes.

In Sweden, four NGOs lodged a complaint in April 2021 against Assad and several top officials after two chemical attacks in 2013 and 2017.

In 2016, the United Nations set up its International, Impartial and Independent Mechanism, which is preparing war crimes charges against individuals over the Syrian conflict.

Since April 20 the body has been gathering evidence for use in possible future trials.