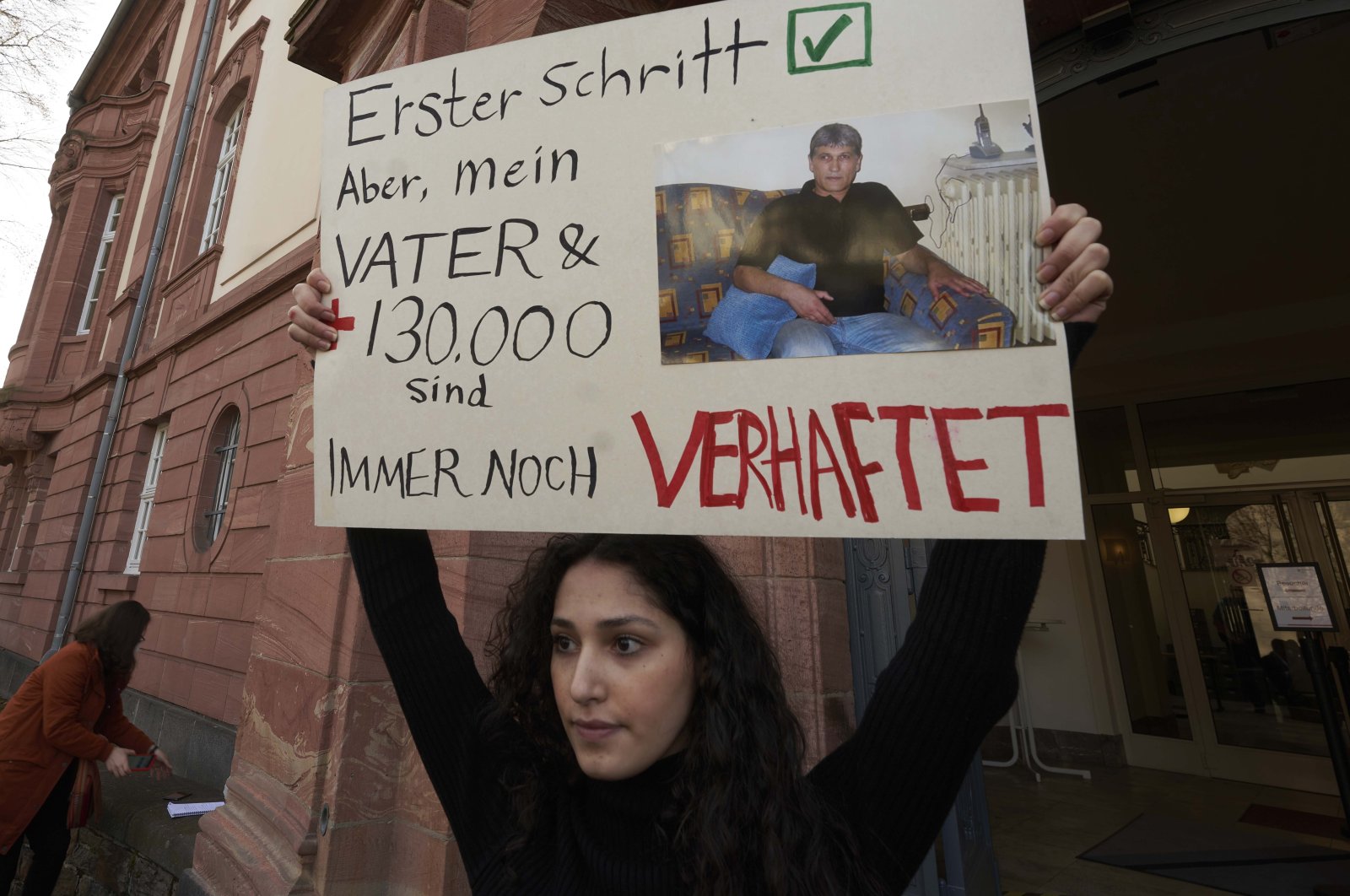 Serda Alshehabi comments on the verdict in front of the building of the Higher Regional Court in Koblenz, Germany, Feb. 24, 2021. (AP Photo)
by ASSOCIATED PRESS Jan 12, 2022 4:19 pm
RECOMMENDED

Victims of torture in Syria and human rights activists say they hope the upcoming verdict in a landmark trial will be a first step toward justice for countless Syrians who suffered abuse at the hands of Bashar Assad’s regime in the country’s long-running conflict.

A court in the German city of Koblenz is scheduled to deliver its ruling Thursday in the trial of Anwar Raslan, a former Syrian secret police officer who is accused of crimes against humanity for overseeing the abuse of detainees at a jail near Damascus a decade ago.

Speaking this week before the verdict, one of those who testified against Raslan said that whatever the outcome, the court proceedings in Germany would send an important message that those responsible for crimes in Syria can be held to account.

"As Syrians who suffered a lot, especially after the beginning of the revolution, (the trials shows) those sufferings are not in vain," said Wassim Mukdad, a torture survivor and co-plaintiff who – like the defendant – now lives in Germany.

Mukdad was among dozens of witnesses who testified against Raslan and a second defendant, Eyad al-Gharib, who was convicted last year of accessory to crimes against humanity and sentenced by the Koblenz state court to 4 ½ years in prison.

The court concluded that al-Gharib was part of a unit that detained anti-government protestors and took them to a facility in the Syrian city of Douma known as Al Khatib, or Branch 251, where they were tortured.

Federal prosecutors allege that Raslan was the senior officer in charge of the jail and supervised the "systematic and brutal torture" of more than 4,000 prisoners between April 2011 and September 2012, resulting in the deaths of at least 58 people.

The court heard evidence implicating Raslan in 30 of those deaths, said Patrick Kroker, a lawyer with the European Center for Constitutional and Human Rights who represented several survivors at the trial. Instances of sexual violence are also being considered as part of the charge, he said.

A key part of the evidence against Raslan were the photographs of alleged torture victims smuggled out of Syria by a former police officer, who goes by the alias of Caesar.

Raslan could face life in prison if convicted. His lawyers asked the court last week to acquit their client, claiming that he never personally tortured anybody and that he defected in late 2012.

Kroker said that while the trial is the first of its kind worldwide, it doesn’t set a legal precedent the way cases do in the American or British legal system. However, other courts can cite the verdict and evidence heard in Koblenz, he said.

With Russia and China using their vetoes to block attempts by the United Nations Security Council to refer Syria to the International Criminal Court (ICC), countries like Germany that apply the principle of universal jurisdiction for serious crimes will increasingly become the venue for such trials, Kroker said.

About 800,000 Syrians have sought refuge in Germany since the start of the war, including Raslan and al-Gharib, who were arrested in 2019. The Koblenz court’s decision not to provide Arabic translations to spectators for most of the 107 hearings or allow the trial to be recorded for the historical record has been a disappointment.

Still, Mukdad, the co-plaintiff, said he was "relieved" that Raslan was getting a fair trial.

"This is actually what we strived for," he said. "To solve our problems through laws and through fair trials, not through violence and counter-violence, not through revenge and the law of the jungle."

A Syrian doctor, Alaa M., is expected to go on trial in Germany this year accused of torturing an inmate at a prison run by military intelligence in his home country.