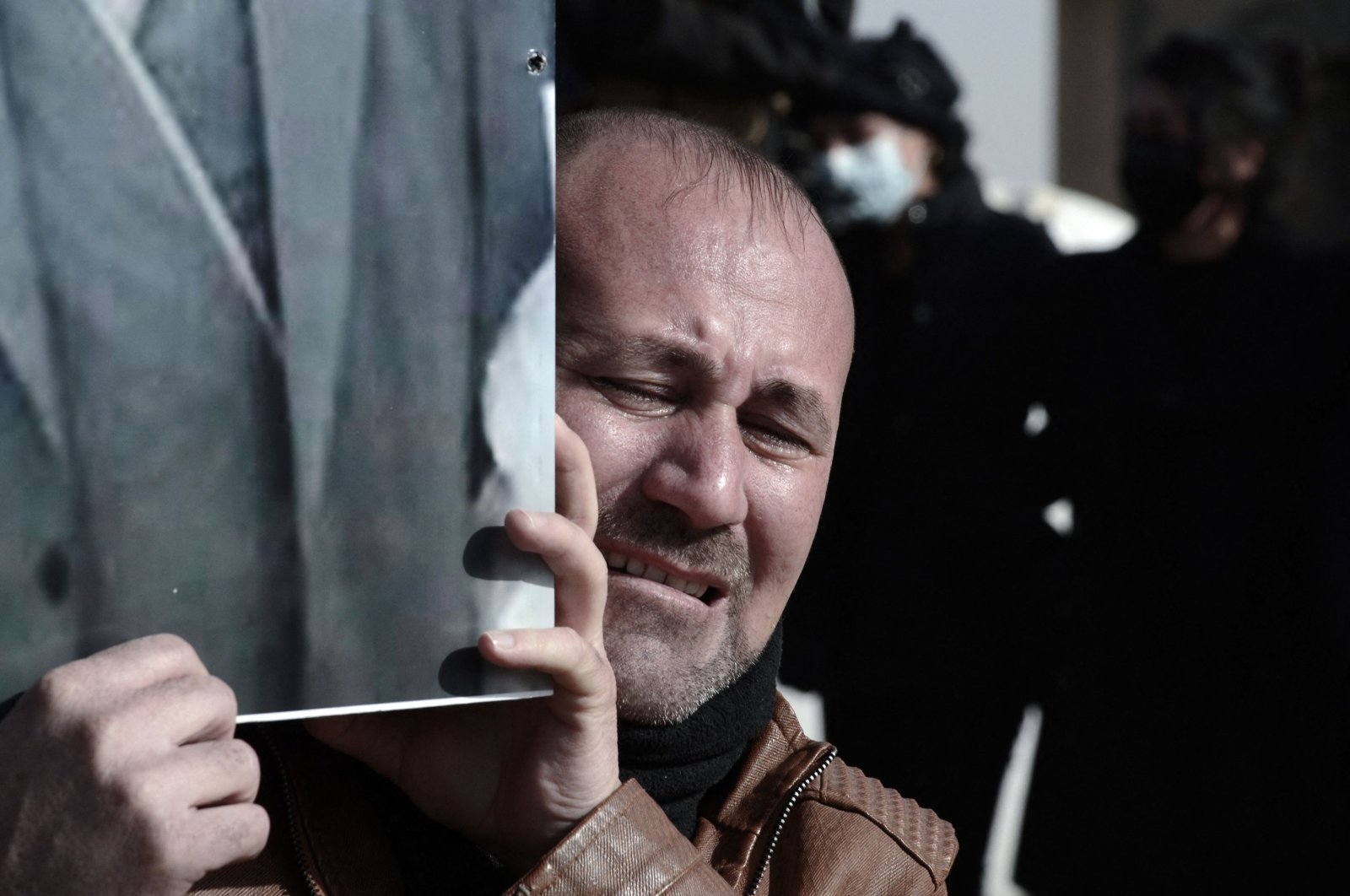 A mourner reacts as he carries a coffin during a mass funeral for Yazidi victims of Daesh whose remains were found in a mass grave, in the northern Iraqi village of Kojo in Sinjar district, Iraq, Dec. 9, 2021. (AFP Photo)
by DAILY SABAH Dec 09, 2021 9:14 pm
RECOMMENDED

Incense wafted in the air as a funeral cortege made its way to a cemetery in northern Iraq for the burial of 41 Yazidis killed by Daesh terrorists and recovered from mass graves.

After seizing swathes of Iraq in 2014, Daesh terrorists carried out horrific massacres, including in the northern region of Sinjar where the Yazidi minority has long been rooted.

After Iraqi authorities declared victory over the terrorists in 2017, scores of mass graves were discovered across the country, including in the Sinjar town of Kojo.

The first of several mass graves was exhumed in Kojo in mid-March 2019, followed by a long and painstaking process of identifying the remains.

In November, a German court, in a historic first, jailed an Iraqi Daesh member to life in prison for war crimes against the Yazidis, finding him guilty of genocide.

Portraits of the victims – both men and women – were placed in front of each coffin before it was lowered into the ground.

Flowers and the Iraqi flag were laid on top of the coffins.

Yazidi religious hymns were recited during the ceremony, as women wailed and beat their chests in mourning.

Suleiman Hussein, 53, stood among the mourners to pay respects to his father, a cousin and several uncles.

Hussein helped identify his relatives whose remains were found in mass graves around Kojo thanks to items of clothing and other personal effects.

Iraqi authorities have also taken thousands of DNA samples from families in Sinjar to help identify the victims.

Kiji Ammo Sello, 49, buried his sister-in-law and uncles. In February, he had already laid to rest his sisters and their children.

Each time "our wound reopens," he said. "It has been seven years and we have known no respite."

"Today, my community buried 41 Yazidi victims (26 men and 15 women) of the Kojo massacre," she said of her hometown.

"My heart is with all families who will finally be able to honour their loved ones," she wrote.

"Yet, thousands of families still wait to bury relatives, which is why we must push for expedited exhumations."

Murad was seized by Daesh from her home village of Kojo in August 2014 and taken to the city of Mosul.

As a captive of the reviled extremist group, Murad said she was tortured and raped.

The Yazidis follow an ancient religion rooted in Zoroastrianism, and Daesh considered them "apostates" and "devil-worshippers."

According to religious authorities, more than 1,280 Yazidis were killed by Daesh, leaving several hundred children orphaned.

Nearly 70 of their shrines were destroyed.

The mass graves in Iraq where terrorists are believed to have dumped their victims contain up to 12,000 bodies, according to the U.N.

Some 5,000 other bodies are thought to be in mass graves in neighboring Syria.

"Many families have left Iraq while entire ones are listed as missing with only one survivor around to provide DNA, and that is not enough."

Mourners said they hope other countries will follow Germany's example and put on trial Daesh members for the crimes they committed.