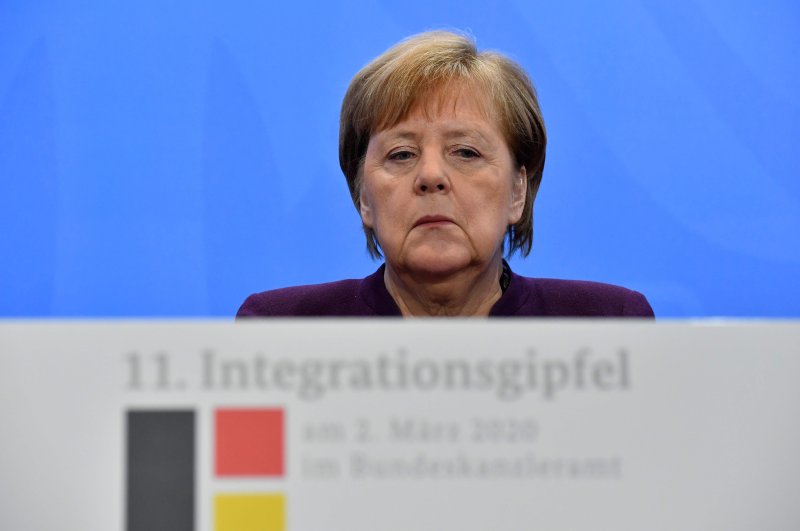 German Chancellor Angela Merkel attends a press conference at the end of a summit on integration at the Chancellery in Berlin on March 2, 2020. (AFP Photo)
by Daily Sabah with Wires
Mar 02, 2020 7:10 pm

German Chancellor Angela Merkel urged Monday that a cease-fire in Syria's war-ravaged Idlib is necessary and that a safe zone on Syria's border with Turkey should be created.

"We need a cease-fire in Idlib," she said.

"We also need to create a safe zone for hundreds of thousands of Syrians standing on the Turkish border right now," she added.

Merkel's remarks came as President Recep Tayyip Erdoğan said that "it is too late for Turkey to close its borders for migrants to cross into Europe," as he criticized European countries for ignoring Turkey’s calls to respond to the ongoing humanitarian crisis in northwestern Syria.

The president noted that calls from European leaders poured in after he announced Turkey would no longer stem the flow of irregular migrants to the bloc.

“Turkey will not close its border gates for refugees to cross into Europe anymore; it is a done deal,” Erdoğan said, adding that Europe too will take its share of the burden.

He reiterated once again that Turkey will continue to carry out its determined operation against the Assad regime forces in Idlib, as he praised the Turkish people for their unity, fraternity and solidarity, which he said strengthens the country.

Also, attacks by the Bashar Assad regime forces killed 55 Turkish soldiers in Idlib in February. President Erdoğan has threatened to push back Assad forces if they do not pull back to pre-determined lines. Regime airstrikes targeting Turkish troops have heightened tensions between pro-opposition Turkey, Assad and its ally, Russia.