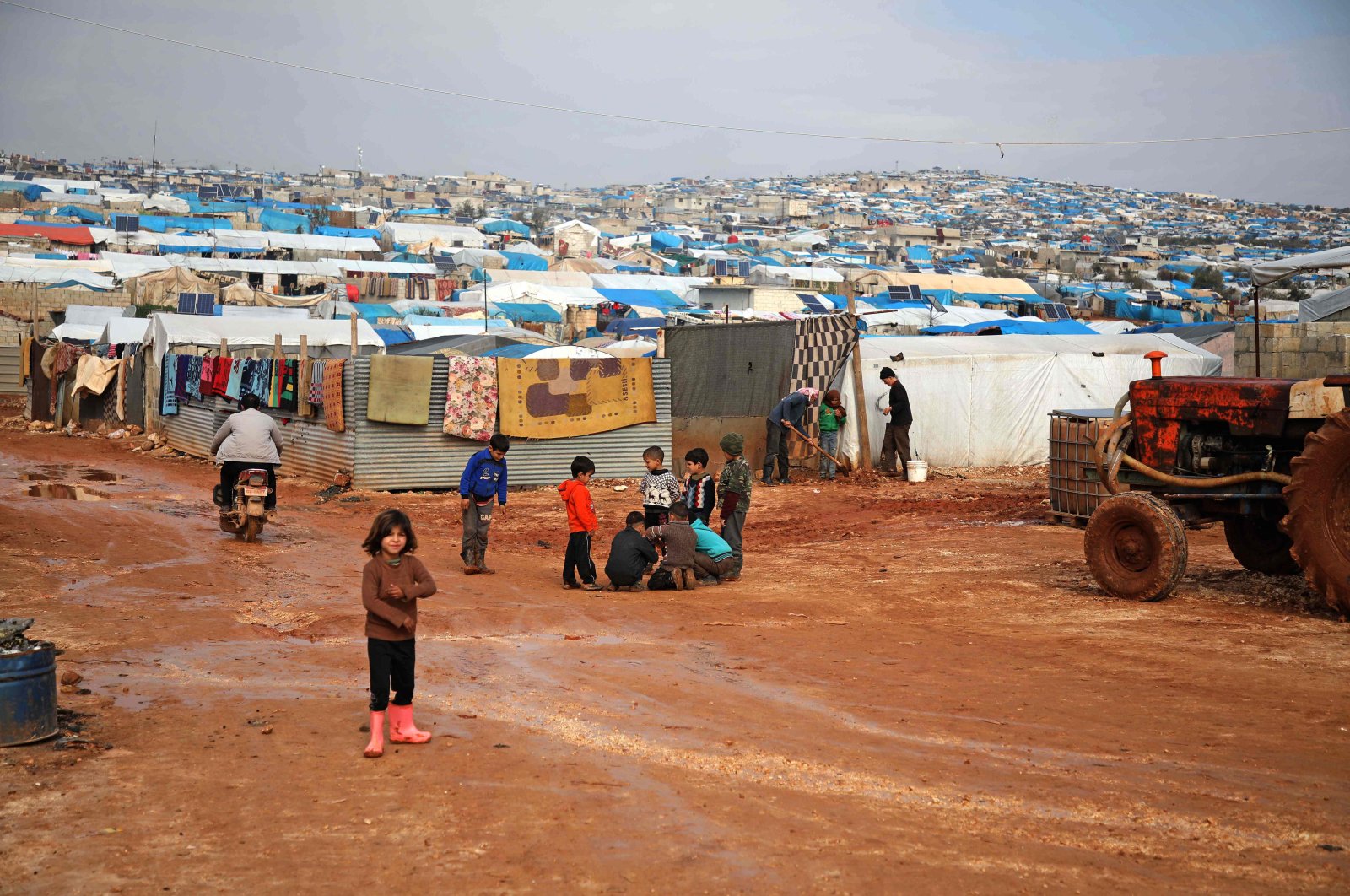 Children gather outside their makeshift shelters following torrential rain that affected a camp for displaced people near the town of Atmeh close to the Turkish border, Syria, Jan. 10, 2019. (AFP File Photo)
by Anadolu Agency May 20, 2021 11:57 am
RECOMMENDED

Over a quarter of a million school-age children are unable to access education due to the lack of schools in northern Syria's Idlib province, a nongovernmental organization (NGO) said Thursday.

While around 345,000 students, at all levels, attend school in the northern Syrian province of Idlib, some 260,000 school-age children are unable to do so.

"We see that there are difficulties in meeting the most basic needs related to education in the Idlib region of Syria," Sebahattin Aydın, the education coordinator of the Humanitarian Relief Foundation (IHH), told Anadolu Agency (AA).

"There are almost 1,000 schools and 24,000 teachers in the region, while 5,116 of teachers are volunteers without any income," Aydın said, adding that these people have not abandoned their students against all the odds.

They teach voluntarily because there is no government or NGO financial support for education in the region, he stressed.

He added, "They try to earn their keeps with daywork such as shepherding, peddling or helping traders, and they do not abandon their students."

One of the main problems related to education in this region is supporting teachers, he said and noted, "Undoubtedly, supporting them stands as the first priority in raising education standards."

NGOs, especially from Turkey, are active in the region in building briquette houses and providing humanitarian aid.

Aydın also said there are many destroyed schools in the region, "We see that the schools close to the conflict points have been targeted and destroyed, and education has been prevented."

After the repairing of these schools, people return to these regions and start to live in their own lands, he underlined.

Another problem is the lack of basic education materials in these schools such as desks, chalk, notebooks, stationery items and heating in winter, he stressed.

He said the most important factor related to these problems is that the NGOs are not active in this area, and added, "NGOs both from Turkey and foreign countries should focus on this area."

"School shortages in camps, insufficient classrooms in schools, and the limited capacity of classrooms make access to education difficult for students," he added.

To solve this problem, it is necessary to build a new school in each camp area, especially in the newly built campsites, in a cost-effective way, Aydın noted.

Touching on the validity of these schools, he said the curriculum that was prepared for temporary education centers that were opened for Syrians in Turkey is also taught in Idlib, just as in the regions of Azaz, Jarablus, Afrin, Tal Abyad and Ras al-Ain.

This way, students who graduate in Idlib and receive their diploma from the local government, are also approved as primary school graduates in Turkey, he asserted.

Mentioning the IHH's works in the region, he said the foundation contributes to educational efforts in Idlib with 35 educational institutions, 600 education employees, and by supporting more than 15,000 educators in many fields.

"Apart from this, we continue to work on meeting the needs of schools in numerous areas, supporting volunteer teachers with cash and food aid in different periods of the year, and meeting educational materials and heating requirements."