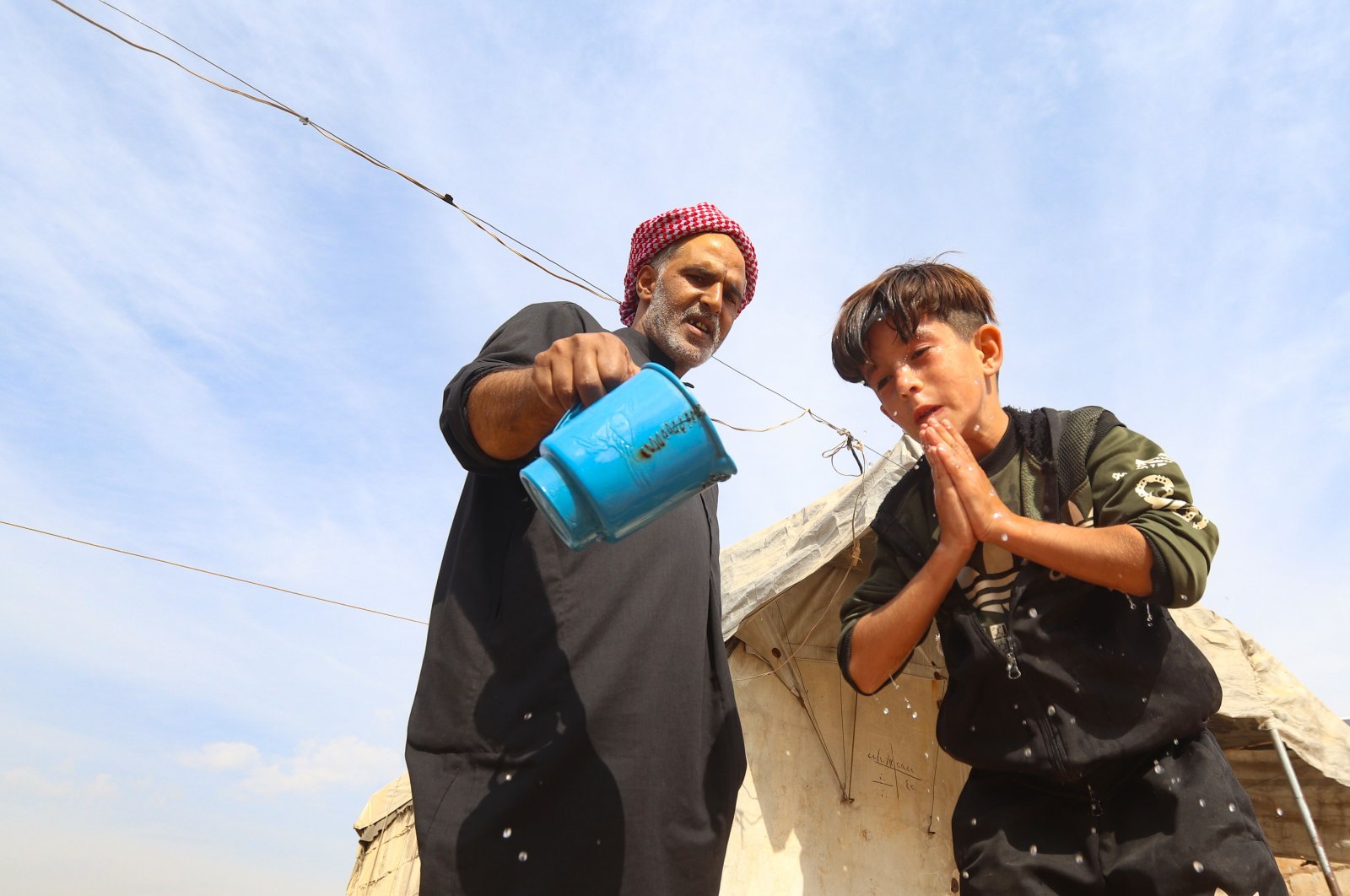 A young boy washes his face with water poured from a jug by an elderly man, in an overcrowded displacement camp near the village of Qah near the Turkish border in Syria's northwestern Idlib province, Oct. 28, 2020. (AFP Photo)
by DAILY SABAH
Nov 19, 2020 11:17 am

It said that regime and Russian forces late Wednesday targeted a school as well as civilian homes in Idlib, shelling them with 75 shells. No casualties were recorded, the group wrote on Twitter.

Idlib, the last opposition bastion, has been battered by repeated military offensives from the Bashar Assad regime and is home to nearly 4 million people, most of them displaced and living in tent camps or unfinished buildings.

In March, a fragile truce was brokered between Moscow and Ankara in response to the months of fighting by the Russia-backed regime that launched military offensives on Idlib and displaced almost a million people from their homes. Most of the refugees sought shelter at camps close to the border with Turkey, while others went to areas under the control of the Syrian opposition.

Russia intervened directly in Syria in late 2015 allegedly at the official request of the Syrian regime. Moscow has established a major presence in Syria, where its air force and military bases across the country have allowed Assad in recent years to defeat opposition who rose up against his authoritarian rule.

The Human Rights Watch (HRW) in October in a report said it investigated dozens of "unlawful" air and ground strikes by Russia and the regime on civilian targets in the region around the city of Idlib between April 2019 and March 2020 that killed hundreds of civilians.

Moscow and Damascus deny accusations of indiscriminate bombing of civilians in an area where 3 million people have found refuge during the nearly 10-year conflict. The two allies say they target “terrorists” who have influence in the region.

Compounding the suffering of the people in northwestern Syria, COVID-19 infections in Idlib have been increasing rapidly. Spared until July, the region is now recording 300-500 infections a day, and the number is rising fast.

“Thirteen people died in northern Syria yesterday due to their infection with the coronavirus. The number of cases increased to more than 12,000 until today, warning of a looming humanitarian disaster given the deteriorating medical situation,” the White Helmets warned.

Infection rates jumped nearly twentyfold between September and October, the U.N. said. Since then, it has climbed 300%.

The number of infections is probably much higher. Cities have been hit hardest, but health workers fear the virus will take hold in overcrowded camps.

With an economic crisis gripping Syria, the local currency tumbling and resources in war zones shrinking, even the price of soap and water is soaring.

The pandemic, which has severely tested even developed countries, is the biggest challenge yet for Syria's health sector, already depleted by years of conflict. Authorities are pacing themselves, deploying equipment and supplies where needed in war-scarred areas.