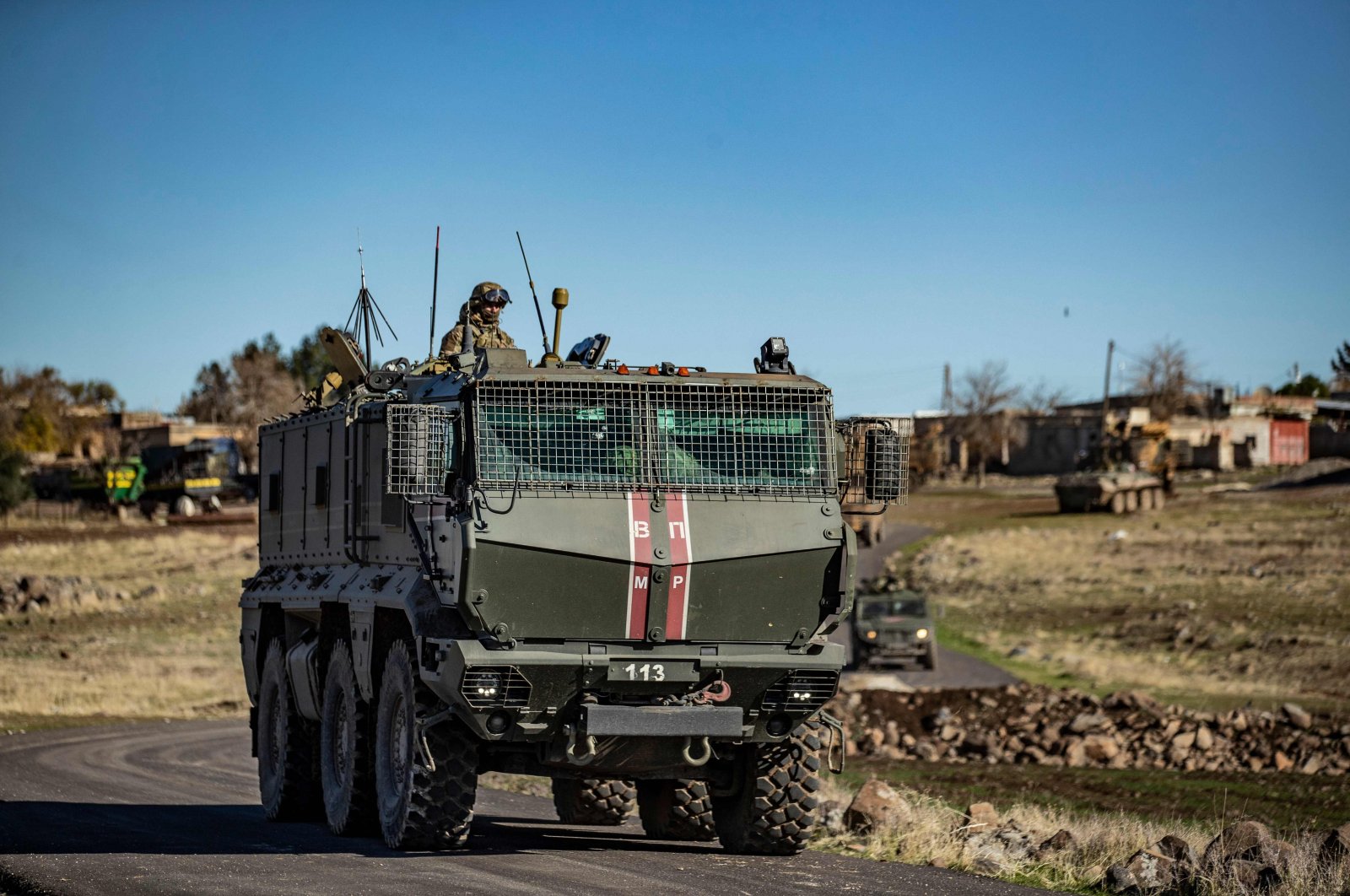 A soldier sits atop a military vehicle taking part in a joint Russian-Turkish patrol in the countryside of the Syrian town of al-Jawadiyah, in northeastern Hassakeh province, near the border with Turkey, on Dec. 24, 2020. (AFP Photo)
by DAILY SABAH WITH AA Dec 28, 2020 12:50 pm
RECOMMENDED

Russia continues to intensify its military presence in northeastern Syria, increasing the number of its troops to 1,000 in Hassakeh, a Syrian province under the occupation of the YPG, the PKK terrorist group's Syrian offshoot.

According to the information received by Anadolu Agency (AA) from local sources, over the past month, Russia escalated its military deployment to its military bases in Hassakeh, located east of the Euphrates.

During the month of December, the Russian Armed Forces sent hundreds of armed vehicles and logistics trucks from its Hmeimim Air Base in Latakia to the town of Qamishli in Hassakeh.

The latest of its deliveries took place last week, when two Russian warplanes, six helicopters and numerous troops were transferred to Qamishli from Latakia. The troops have settled in both Qamishli Airport, controlled by the Syrian regime, and a Russian military base near the airport. This latest delivery increased the number of Russian troops in the region to 1,000.

Russia also deployed 1,200 personnel from various groups that fight alongside regime soldiers and are supported by Moscow to the airport. Russia reportedly trains units of 300 soldiers in skills such as the use of heavy weaponry and sharpshooting. Each group of 300 is being commanded by three Russian military personnel.

Russian forces had been replacing U.S. troops as they withdrew from some bases following Turkey's launch of Operation Peace Spring on Oct. 9, 2019, against the YPG terrorists in northeastern Syria.

Since then, Russia has continually intensified its military presence east of the Euphrates, including in the areas under YPG control, increasing the number of its military bases and posts.

There are currently 18 Russian military bases and posts in the areas under YPG control east of the Euphrates, namely in Hassakeh, Raqqa, and Manbij and Ain al-Arab (Kobani) in Aleppo.

Pundits claim that such a rapid increase in Russian presence in the region may destabilize its military balance with the U.S. in the region.

Russia's efforts to form military units in Hassakeh were foiled by the U.S in the past. Russia tried to reach the Rmeilan oil fields, east of Qamishli, but the U.S. soldiers prevented them.

In retaliation, Russia stopped the U.S. soldiers trying to reach Qamishli, forcing them to return to Rmeilan.

While the YPG continues its occupation of the majority of Hassakeh, the Bashar Assad regime controls the Kevkep Mountain in the center of the province. Regime forces also have an airport in Qamishli and a military brigade as well as a security branch. Some state institutions in the province are also under the control of the Assad regime.

On Dec. 18 and Dec. 24, Turkish and Russian troops conducted a joint patrol in Hassakeh, monitoring whether terrorist groups are present in five settlements in the region.

Turkey and Russia, which back opposing sides in Syria's war, once again agreed on March 5 this year to halt military activity in the northwestern Idlib region after an escalation of violence brought the two sides close to confrontation. As part of the agreement, Turkish and Russian forces have been carrying out joint patrols along the M4 highway linking Syria's east and west, establishing a security corridor on either side.

Since 2016, Ankara has launched a trio of successful military operations across its border into northern Syria to prevent the formation of a terror corridor and enable peaceful settlement by locals.

In its more than 40-year terror campaign against Turkey, the PKK – listed as a terrorist group by Turkey, the U.S. and the European Union – has been responsible for the deaths of 40,000 people, including women, children and infants.