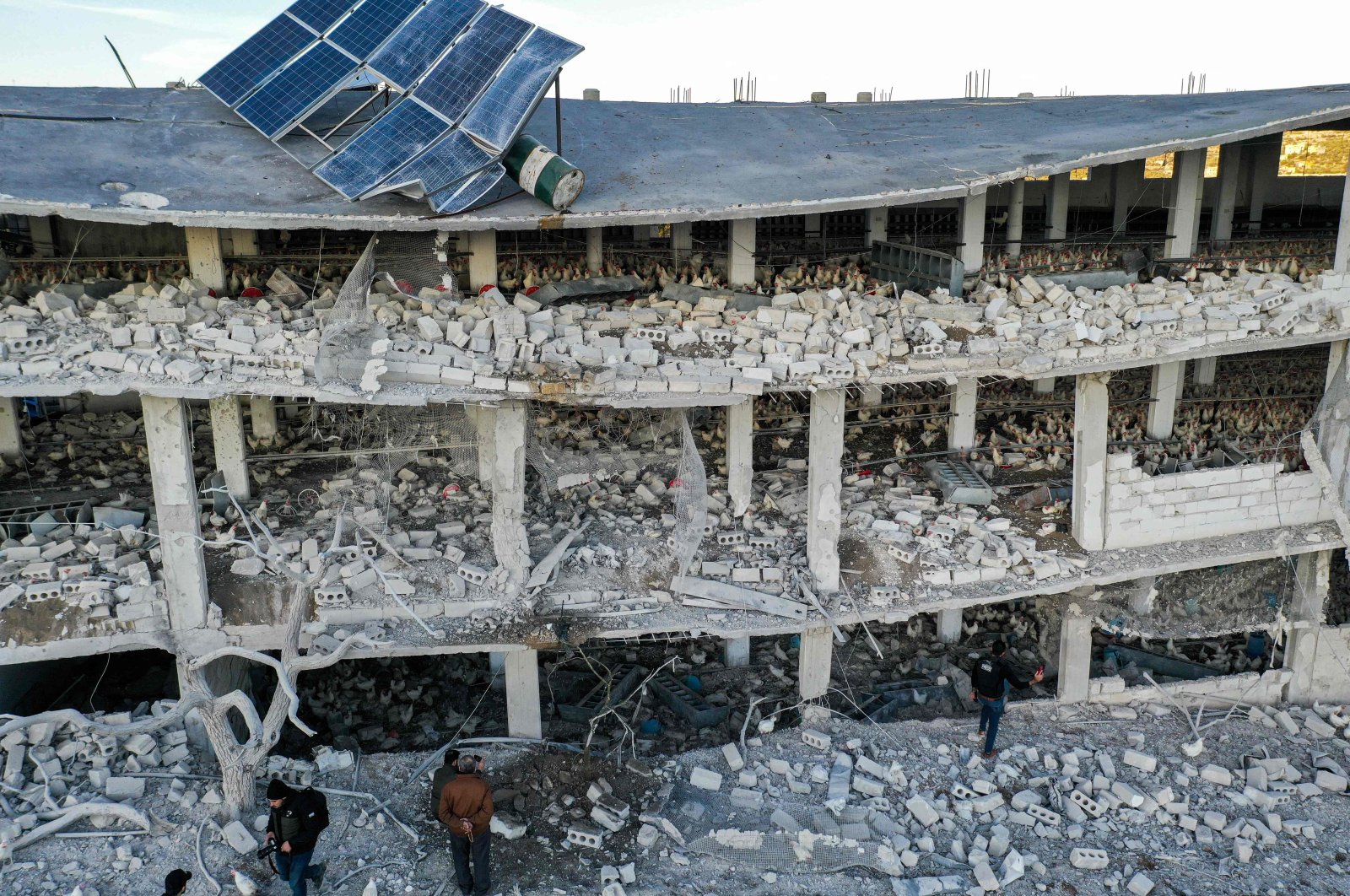 An aerial view of a poultry farm hit by air strikes near the town of Kafr Takharim in Syria's opposition-held northwestern Idlib province, Jan. 3, 2022 . (AFP Photo)
by DAILY SABAH Jan 04, 2022 11:29 am
RECOMMENDED

Russia on Monday resumed its attacks on civilians as well as vital civilian infrastructure for the sixth day in a row in Syria’s northwestern Idlib, marking a new year flare-up for the last opposition-held bastion.

Russia has been continuing to destroy civilian infrastructure including schools, health centers, food and water facilities in Syria’s northwest.

“In the last days, Russian warplanes attacked many poultry farms, a factory of foodstuff, and one of the main water stations that supply thousands of people in Idlib,” the White Helmets civil defense group said on Twitter.

It said that a woman and her child were injured as a result of the Russian attacks on the farm in the outskirts of Kafer Takharim village.

“The teams responded and transferred the injured to the nearby hospital.”

Similarly reporting the issue, the Syrian Network for Human Rights (SNHR) also confirmed the attack on the farm by a Russian airstrike.

“SNHR confirms that the poultry farm is free of any military presence or equipment,” it said in a written statement.

A day earlier, a water station in northwest Syria was also badly damaged as the country is already facing a water crisis.

The White Helmets civil defense group announced on Sunday that a total of 225 civilians, including 65 children and 38 women have been killed by Russian and regime attacks in 2021 in the country’s northwest.

Meanwhile, as Syrians entered another year in civil war and destruction, the SNHR also published a report showing the deaths and violence Syrians endured in 2021.

In a 33-page report, the SNHR stressed that the killings have continued for the 11th consecutive year and said that murder has become widespread and systematic, mainly at the hands of Syrian regime forces and affiliated militias. It also added that the participation of several new parties in the Syrian conflict has increased the importance and complexity of documenting the victims killed in Syria.

For over a decade, the Assad regime has ignored the needs and safety of the Syrian people, only eyeing further gains of territory and crushing the opposition. With this aim, the regime has for years bombed civilian facilities such as schools, hospitals and residential areas, causing the displacement of almost half of the country’s population.

Almost a million people had fled the Assad regime’s offensive on Idlib since December 2019 with many seeking refuge in overcrowded tent camps near the Turkish border. A truce was brokered between Moscow and Ankara in March 2020 in response to the months of fighting by the Russia-backed regime; yet, the regime still frequently carries out attacks on civilians, hindering the return of people to their homes and forcing them to stay in makeshift camps.

Idlib, whose 2.9 million inhabitants have been protected by a cease-fire since March 2020, is one of the few key areas still holding out against the Damascus regime. It was a protest hub in 2011 and officially came under full opposition control some four years later. A Russian-backed regime offensive in 2019 saw the Syrian regime retake more than half the province.