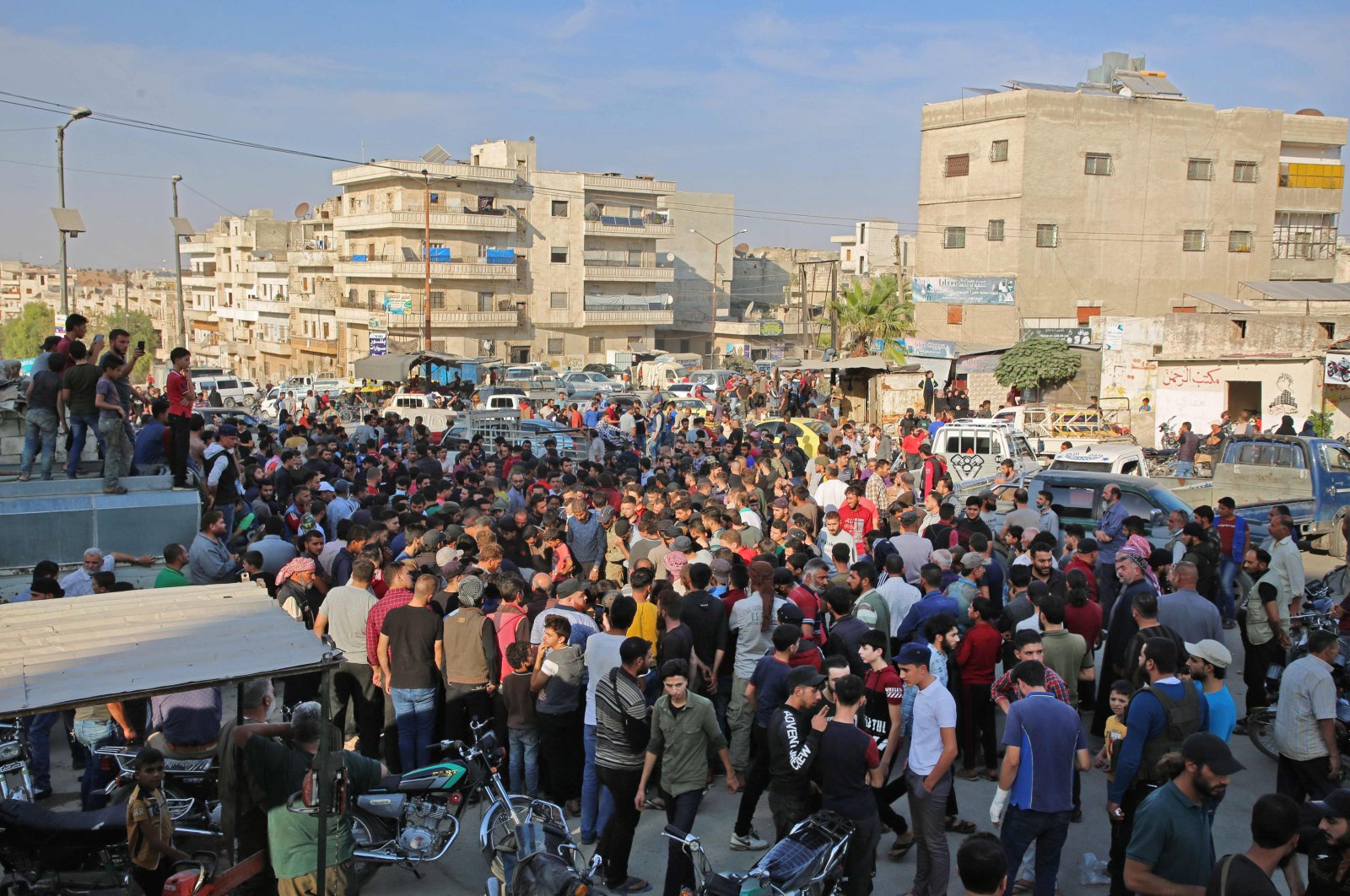 Syrians take part in the funeral of soldiers of the Faylaq al-Sham opposition faction in Syria, in the northwestern city of Idlib, on October 26, 2020, following their death in a Russian air strike. (AFP Photo)
by DAILY SABAH WITH AGENCIES Oct 26, 2020 12:47 pm
RECOMMENDED

Russian warplanes attacked the training camp of opposition forces in Syria’s northwestern Idlib province on Monday, killing a large number of soldiers in the deadliest surge of violence since a truce was agreed to almost eight months ago.

According to local opposition military sources, the Faylaq al-Sham group of the Syrian National Army was attacked by Russian warplanes in violation of the March cease-fire.

According to the Britain-based Syrian Observatory for Human Rights (SOHR), at least 78 opposition soldiers were estimated to have been killed in the attack on the camp in the Jabal Duwayli area of Idlib, about 10 kilometers (6 miles) from the Turkish border, while another 90 were wounded. It added that search operations were ongoing.

The death toll is expected to rise as some of the injured are in serious condition, while many others remain missing under the rubble, the monitor said.

In March, a fragile truce was brokered between Moscow and Ankara in response to the months of fighting by the Russia-backed regime that launched military offensives on the country's last major opposition stronghold in Idlib and displaced almost a million people from their homes. Most of the refugees sought shelter at camps close to the border with Turkey, while others went to areas under the control of the Syrian opposition.

Abdurrahman Mustafa, head of the Syrian Interim Government, on Monday condemned the Russian “outright aggression” against the training camp belonging to the SNA in Kafr Takharim town. Saying that this was “a dangerous new escalating step.” Mustafa said that “occupying Russia is exercising terrorism” in Syria. He added that the Syrian Interim Government’s defense ministry called on the international community to assume its responsibilities and force Russia to respect international law and abandon a military option.

Idlib has long been under siege by Bashar Assad's regime forces and its allies with previous cease-fires in the region having been plagued with violations.

Of the almost 1 million people displaced in the last Idlib offensive last December, more than 200,000 have returned home to their towns and villages, most since the cease-fire went into force.

The March truce had largely held, despite some intermittent bombardment in the area.

The latest Russian attack came following a rise in tension over the past few weeks in the region with regime and Russian forces reportedly intensifying bombings on the last opposition bastion and after Russian and Turkish delegations discussed the situation in Idlib last week in Moscow. The delegations pointed out “the relevance of further coordinated efforts of Russia and Turkey” in the talks.

On Oct. 14 the Syrian regime and its backer Russia targeted the region once again, killing two and injuring 13 others. Again this month on Oct. 8, attacks by the Assad regime in Idlib killed one civilian and injured another four people.

Russia intervened directly in Syria in late 2015 allegedly at an official request by the Syrian regime. Moscow has established a major presence in Syria, where its air force and military bases across the country have allowed Assad in recent years to defeat opposition who rose up against his authoritarian rule.

The Human Rights Watch (HRW) last week in a report said it investigated dozens of "unlawful" air and ground strikes by Russia and the regime on civilian targets in the region around the city of Idlib between April 2019 and March 2020 that killed hundreds of civilians.

Moscow and Damascus deny accusations of indiscriminate bombing of civilians in an area where 3 million people have found refuge during the nearly 10-year conflict. The two allies say they target “terrorists” who hold sway in the region.