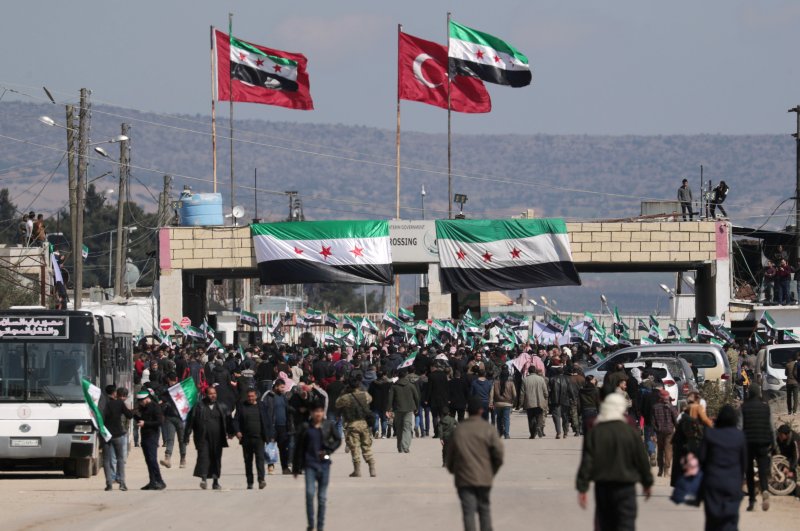 Internally displaced Syrians hold Syrian opposition flags during a protest in support of the Turkish army and the SNA at the Bab el-Salam border crossing between the Syrian town of Azaz and the Turkish town of Kilis, in Syria, Feb. 25, 2020. (Reuters Photo)
by Daily Sabah with AA Mar 04, 2020 2:26 pm
RECOMMENDED

Syrian nongovernmental organizations in Turkey urged Syrian youth, who fled from the civil war that erupted in 2011 and are living as refugees, to join the ranks of the Syrian National Army (SNA) against the brutal campaign by the Bashar Assad regime and its backers – Russia and Iran.

“We are calling on all our Syrian youth living in neighboring countries to join SNA and triumph in this war, which will determine our fate,” Said Denizoğlu said, speaking on behalf of Syrian NGOs.

The statement came after an event in Istanbul organized by Syrian NGOs, which was held to commemorate 36 Turkish soldiers who were killed last week in a deadly regime airstrike while taking part in the Turkish Armed Forces' (TSK) ground offensive to stop regime violence against civilians.

Emphasizing Turkey’s struggle against the campaign by the regime and Russia in northwestern Syria’s Idlib, which has already displaced nearly 1 million people, Denizoğlu said the success of Ankara’s Operation Spring Shield is very significant for the security and stability in the region.

“Operation Spring Shield is a valiant answer against insolent Bashar Assad and his regime. We should take responsibility, and therefore I call on all Syrian youth living as refugees in Turkey and neighboring countries to join SNA,” Denizoğlu said.

Attacks by the regime's forces have killed 55 Turkish soldiers in the past month in Idlib. Turkey launched Operation Spring Shield after a deadline for regime troops to retreat behind Turkish observation posts expired on Feb. 28.