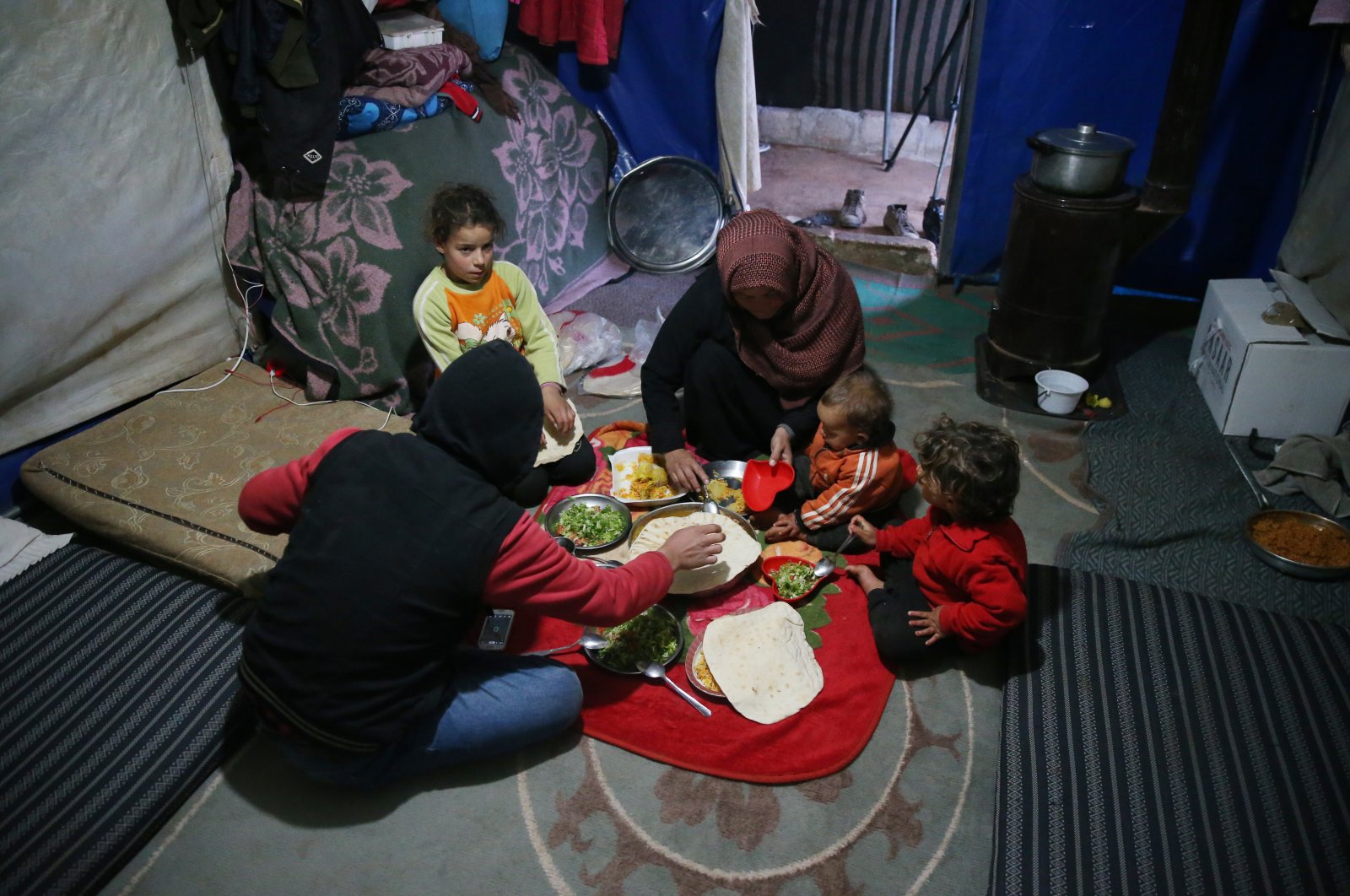 Syrian refugees welcomed their first iftar on Tuesday, marking the coming of the holy month of Ramadan, in Syria's northwestern Idlib province under dilapidated conditions.

Internally displaced civilians in Syria, which has been ravaged by a civil war since 2011, entered Ramadan in the grip of poverty.

Gade Mustafa, a mother of six who fled regime attacks and settled in Idlib's Maarat Misrin camp, broke her first fast away from her home and family.

"We are far from our family and relatives. I don't know anyone from my village in this camp. I'm alone," Mustafa said.

"We miss the Ramadan meetings in our village. Nobody asks about us. Everything used to be cheap. Now everything is expensive. We cannot feed our children with fruit. I hope everyone will return to their homes. May God help the displaced," she added.

The lives of Syrian people dealing with numerous difficulties in rural Idlib's tent camps have become much harder due to the recent winter conditions. As the humanitarian catastrophe in the region has reached new heights, people try to survive by taking shelter under trees or shaky tents built on mud and puddles. Many Turkish nongovernmental organizations (NGOs) and state agencies – including the Disaster and Emergency Management Authority (AFAD), the Turkish Red Crescent (Kızılay) and the Humanitarian Relief Foundation (IHH) – keep providing vital humanitarian aid and conducting humanitarian efforts in the region hosting nearly 4 million people.

For over a decade, the Bashar Assad regime has ignored the needs and safety of the Syrian people, only eyeing further territory gains and crushing the opposition. With this aim, the regime continues to bomb vital facilities such as schools, hospitals and residential areas, causing the displacement of almost half of the country’s population while adopting policies to ensure their lives are more difficult.

Meanwhile, the IHH is aiming to put a smile on the victims of the Syrian war during the month of Ramadan by distributing 500,000 loaves of fresh bread every day, the head of the organization's Syrian branch's media department Salih Tosun said Wednesday.

Collecting the Ramadan aid sent from all around Turkey, as well as the world, in southeastern Hatay province's Reyhanlı district first, the IHH then distributes the collected aid to the northern Syrian provinces of Idlib, al-Bab, Tal Abyad, Jarablus, Azaz and Aleppo.

"We will distribute iftar meals in Afrin, al-Bab, Tal Abyad, Ras al-Ain, Jarablus, Azaz, Aleppo and Idlib. In Syria, we will lend a helping hand to 850,000 people in total. Besides, we will support 20,000 people with zakat money. We did not forget our orphans in Ramadan as well. We will have special activities for them," Tosun said and added that bread is the main necessity during a war-like environment and thus they have put a special emphasis on producing bread.

"With 26 ovens established in Reyhanlı, Kilis and Syria, we are providing bread to the war victims," he said.