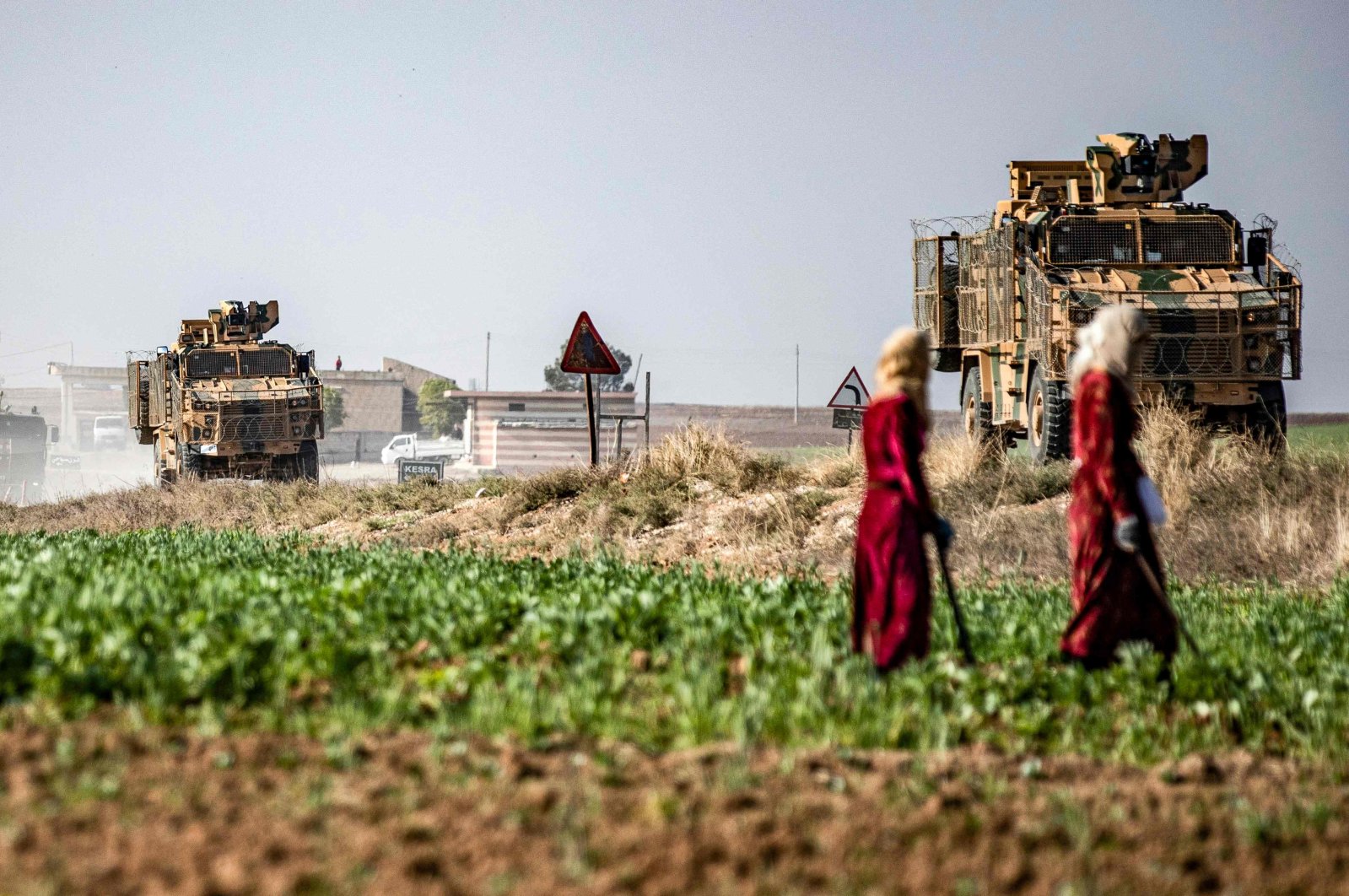 Locals watch as vehicles from a joint Russian-Turkish military patrol convoy pass by in the countryside near Darbasiyah along the border with Turkey in Hasakah province, northeastern Syria, Nov. 30, 2020. (AFP Photo)
by Anadolu Agency Dec 20, 2020 1:34 pm
RECOMMENDED

Turkish authorities denied on Sunday the Syrian regime's claim that the water at the Allouk water station, which meets the needs of the northeastern Hasakah region, was cut off deliberately.

Hasakah province is serviced by 12 of the 30 wells in the Allouk water station, according to Turkish sources who spoke to Anadolu Agency (AA), the water is normally supplied with six pumps working at full capacity, but due to insufficient electric energy, only three pumps are operating.

The Syrian regime has cut power 10 times, supplying only 27 hours of electricity in November and 30 hours in the first week of December on the pretext of power plant maintenance.

The sources said that only 29% of electricity needs in Tal Abyad and Ras al-Ayn provinces are being met.

The Bashar Assad regime has halted the flow of electricity since Dec. 6 in a way that would deliberately endanger the lives of people in the Tal Abyad, Ras al-Ayn and Hasakah provinces, the sources added.

The sources added that the Allouk water station's electricity comes from the Tishrin Dam in Al-Darbasiyah, a town under regime control of the regime. They further said there is not enough water for Hasakah or Tal Tamir due to the regime's lowering the voltage of the electricity supplied to the water pumping station.

Allouk water station personnel, responsible for troubleshooting, reiterated that the problems have not been caused by Turkey, saying instead that the electricity required for the pumps to operate at sufficient capacity is not provided by the Assad regime.

"The Syrian regime and the PKK/ PYD/YPG terrorist organization constantly cut the energy supplies coming to the Peace Spring region. Since previously damaged lines were not repaired intentionally, even on days with electricity, people could not benefit sufficiently," the sources added.

Despite this information, the Syrian Foreign Ministry sent a letter to the United Nations Security Council (UNSC) accusing Turkey.

Since 2016, Ankara has launched a trio of successful military operations across its border into northern Syria to prevent the formation of a terror corridor and enable peaceful settlement by locals.

In its more than 40-year terror campaign against Turkey, the PKK – listed as a terrorist group by Turkey, the U.S. and the European Union – has been responsible for the deaths of 40,000 people, including women, children and infants. The YPG is the PKK's Syrian offshoot.