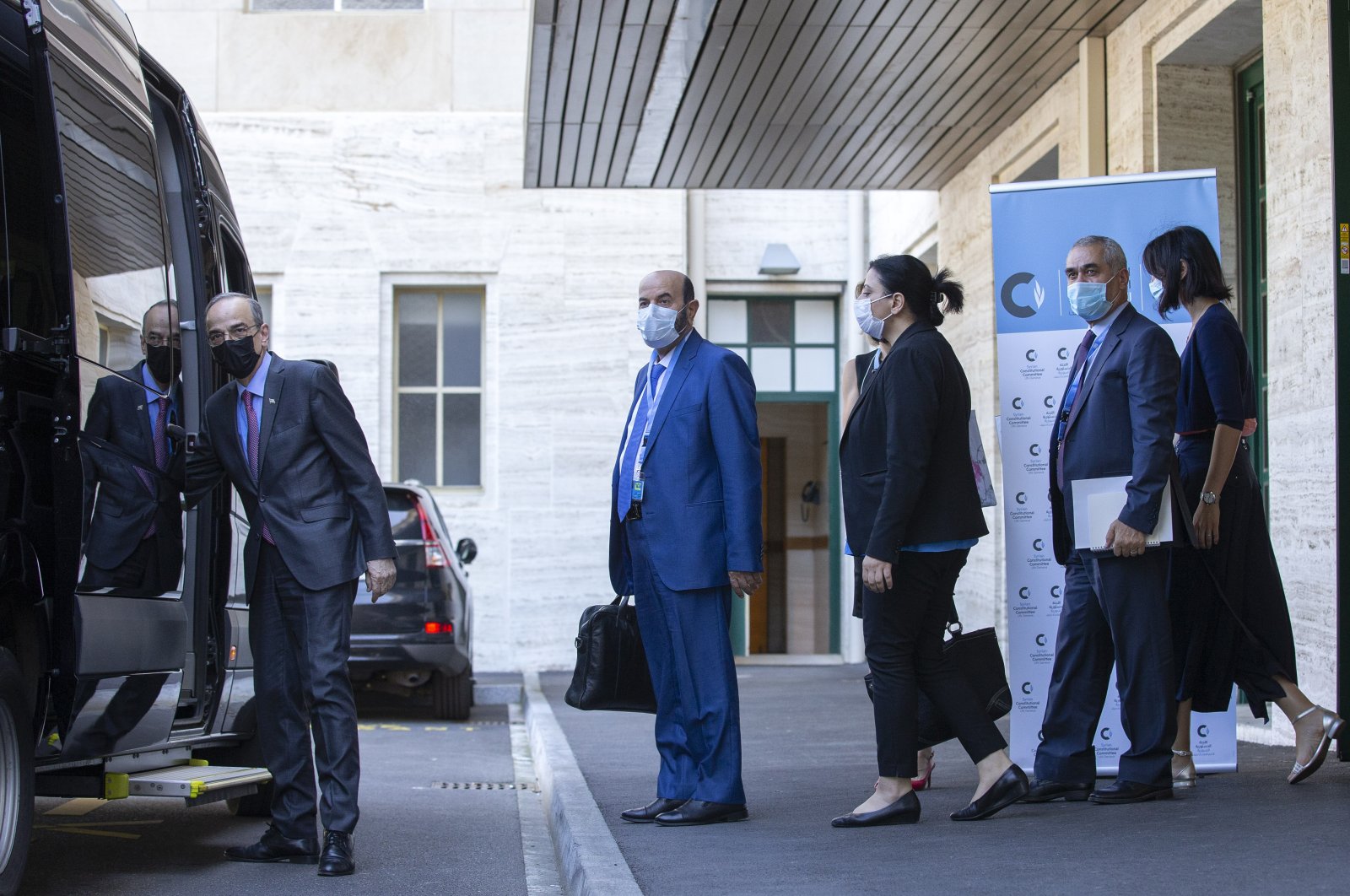 Syrian Constitutional Committee Co-Chair Hadi al-Bahra (L) leaves following the announcement of the suspension of the conference due to cases of COVID-19, at the European headquarters of the United Nations in Geneva, Switzerland, Aug. 24, 2020. (AP Photo)
by DAILY SABAH WITH AGENCIES Aug 24, 2020 7:19 pm
RECOMMENDED

The United Nations-mediated talks involving the Syrian regime, opposition and civil society envoys were put “on hold” after three participants turned positive for COVID-19 just hours after the meetings started in Geneva on Monday, the U.N. said.

The office of U.N. Syria envoy Geir Pedersen said the three delegations had gotten off to a “constructive first meeting” before the talks were suspended and that they were discussing a possible new constitution for the war-battered country – a step he called a prospective “door-opener” to a final resolution of the country’s devastating nine-year civil war.

His office did not specify which delegation or delegations that the three participants were from.

"Having informed the Swiss authorities and the United Nations Office in Geneva, immediate measures have been taken consistent with protocols to mitigate any risks and tracing of anyone who may have been in close contact with affected persons is underway," it said.

The meeting, set to last through the week, will constitute the first of its kind in nine months. The pandemic forced the postponement of an earlier meeting in March. Participants were tested for the coronavirus before and after arrival in Geneva, the U.N. envoy's office said.

Pedersen is hosting three 15-member teams from Syria, while major regional and world powers, Turkey, Russia Iran and the United States, are expected to be present on the sidelines.

With a fragile cease-fire largely holding in the opposition-held region of Idlib, Pedersen said last week he was hoping to build “trust and confidence” in a U.N.-led process that has produced few concrete results so far. However, Pedersen is also hoping for the release of detainees and a nationwide cease-fire.

The opposition seels a new constitution, while the Bashar Assad regime proposes that the current charter be amended.

Hadi al-Bahra, former head of the Syrian National Coalition for Opposition and Revolutionary Forces, the meeting's co-chair, left the U.N. in Geneva with his delegation after the first session in the morning.

"Everything started today in a positive way and started on time. Members started discussions about the core agenda of the meeting, from all sides," al-Bahra told journalists.

He confirmed, "We were tested in Istanbul before we came here," with none of the delegation showing signs of the virus, and they also had tests again in Switzerland showing none of his delegations was infected.

"We are keen that we should advance the Constitution Committee work as fast as possible because we are facing real pain and misery of our people inside Syria, who are faced with COVID-19, the hardship of life and the continuation of the conflict," al-Bahra said.

"So, we are committed to staying here and working as long as possible. We hope the other sides can be at this level of national responsibility and agree to stay longer and work harder to reach a resolution of the crisis."

He said his delegation would handle the situation with Swiss Health Ministry regulations.

"I am confident that we all have learned the lesson. When it comes to confidence-building measures, obviously the fact that we will be meeting here in Geneva, after nine months, is an important step in the right direction. But as I've said many times, it is not enough."

On Tuesday, al-Bahra also suggested peace talks could continue online after they were put on hold due to participants testing positive for the coronavirus.

“It is the only key solution to the Syrian tragedy,” he said.

“During this time, we will continue our work with the representatives of the Syria National Council in the Constitutional Committee through virtual communication tools. We will discuss as well with the U.N. special envoy, Pedersen, the possible options to pursue our work as soon as possible based on authorization from the medical authorities in Geneva,” he added.

U.S. envoy for Syria James Jeffrey told journalists at a Geneva hotel on Monday that the meeting had "encouraged" Washington.

He said that the latest U.S. sanctions, under the Caesar Act passed by Congress, were having a "serious political and psychological impact" on Assad and his inner circle.

"So we are going after them in any way we can and after their international holdings, any way that they or their banks touch dollars, they are in trouble," he said.

But Jeffrey also said, referring to the province in opposition-held northwestern Syria: "I have seen no indication that the Assad regime has given up its dream of a military victory beginning with Idlib."

He suggested that a range of pressures on the Assad regime over the past nine months, including fresh U.S. sanctions, military setbacks and deep economic crises, could push it to shift strategies.

Washington, he said, was eager "to maintain pressure until the Syrian government and its partners realize that they are not going to achieve a military victory."

Pedersen meanwhile acknowledged on Friday that nobody expected "a miracle or a breakthrough" from the talks.

"This is about the beginning, about a long and cumbersome process where we hopefully can start to see progress."

A larger group of 150 delegates is also part of the process but is not meeting this week.

It was also reported that talks within the format of the Astana process were conducted amid the meetings of the Constitutional Committee.

Diplomatic sources said that the talks between the deputy foreign ministers of Turkey, Russia and Iran were held on Sunday and Monday with the participation of Pedersen.