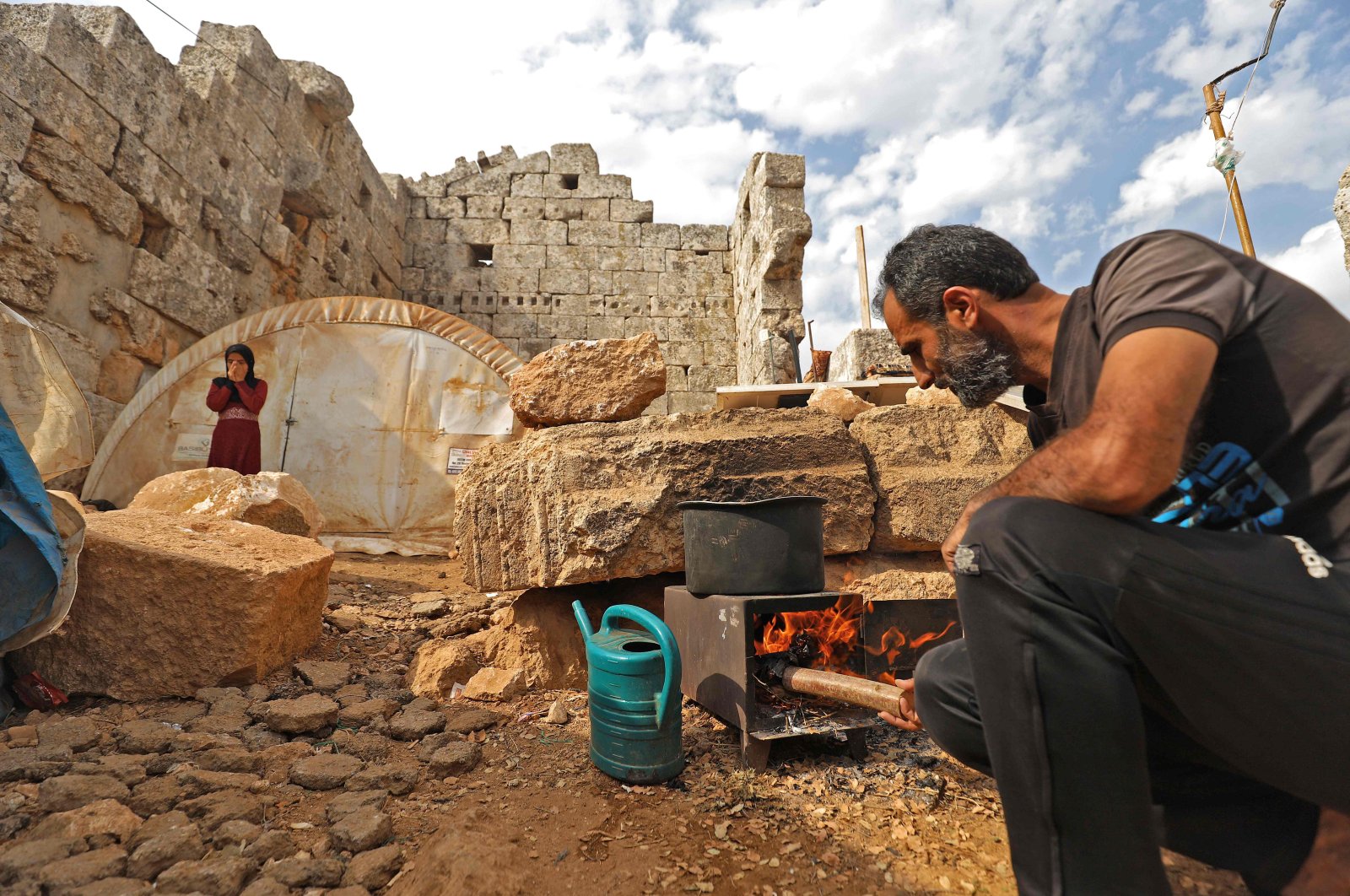 Displaced Syrians are pictured in their makeshift camp amid Roman ruins in the area of Baqirha in northwest Syria not far from the Turkish border on Nov. 1, 2020. (AFP Photo)
by French Press Agency - AFP Nov 11, 2020 12:19 pm
RECOMMENDED

Abdelaziz al-Hassan did not want to live in an overcrowded camp after fleeing war in northwestern Syria, so instead his family pitched a tent in the ruins of a Roman temple.

He, his wife and three children are among almost 1 million Syrians who fled their homes last winter during a Russia-backed offensive on Syria's last opposition stronghold of Idlib.

In the UNESCO-listed site of Baqirha, near the Turkish border, they are now among dozens of Syrians uprooted by war who have settled among centuries-old Roman and Byzantine ruins.

Hassan and his family have set up a tunnel-shaped tent between the three surviving walls of a second-century temple to the Greek god Zeus, on a site strewn with broken columns and a plinth.

Behind their tent, laundry hung on a rope strung between the ancient walls. Propped up over the centuries-old stones, solar panels soaked in the sun near a blackened pot on a small wood-burning stove.

Hassan says the site is a far better option than living in one of the numerous informal displacement camps that have sprouted up along the frontier, especially amid the coronavirus pandemic.

"I chose this place because it provides a peace of mind, far from overcrowded places and those riddled with disease," said the middle-aged man with a salt-and-pepper beard.

Syria is filled with archeological sites, from Roman temples and Crusader castles to Ottoman-era caravanserais.

Many have been damaged, bombarded or plundered throughout a nine-year-old conflict that has killed more than 380,000 people and displaced millions.

Northwest Syria is home to 40 UNESCO-listed villages from the first to the seventh centuries that, the U.N. cultural body says, provide insight into "rural life in late Antiquity and during the Byzantine period."

Dotted with the remains of temples and churches, the sites illustrate "the transition from the ancient pagan world of the Roman Empire to Byzantine Christianity," it says.

In Baqirha, Zeus Bomos, or Zeus of the Altar, was built almost 2 millennia ago, historians say, in a wider area that later prospered from olive oil production.

Maamoun Abdel Karim, the head of Syria's antiquities authority, said Baqirha was exceptional for its well-preserved buildings, also including two churches from the sixth century.

But for all the grand architecture, Hassan admitted there were a few inconveniences to living where he does, including a long walk for his children to the village school.

He also said the area is crawling with poisonous snakes and insects.

"Two days ago, near the tent's opening, I killed a viper," he told Agence France-Presse (AFP). And "every other day, we have to kill a scorpion."

"But we haven't found anywhere better than here yet."

Hassan's brother-in-law, Saleh Jaour, and his dozen children have also made the ancient ruins of Baqirha their new home, after fleeing bombardment last winter that killed his wife and a son.

"I chose this region because it's close to the Turkish border. If anything happens, we can flee to Turkey on foot," said the portly 64-year-old wearing a long dark robe.

As the crow flies, the Turkish border lies just 4 kilometers (2.5 miles) away.

"This place is far from the crowds and the noise," he added, saying he too was taken aback by how many people were living at close proximity in the camps.

Both Hassan and Jaour's families escaped their homes further south during a regime-led offensive between December last year and March on Idlib.

A cease-fire deal reached by Turkey and regime ally Russia has since largely stemmed the fighting, but less than a quarter have returned.

Local officials have asked families living on the archeological site in Baqirha to leave, but they have refused until they are provided with alternative shelter.

"We've gotten used to this place," said Jaour, reluctant to uproot the family again at the start of the rainy winter season.