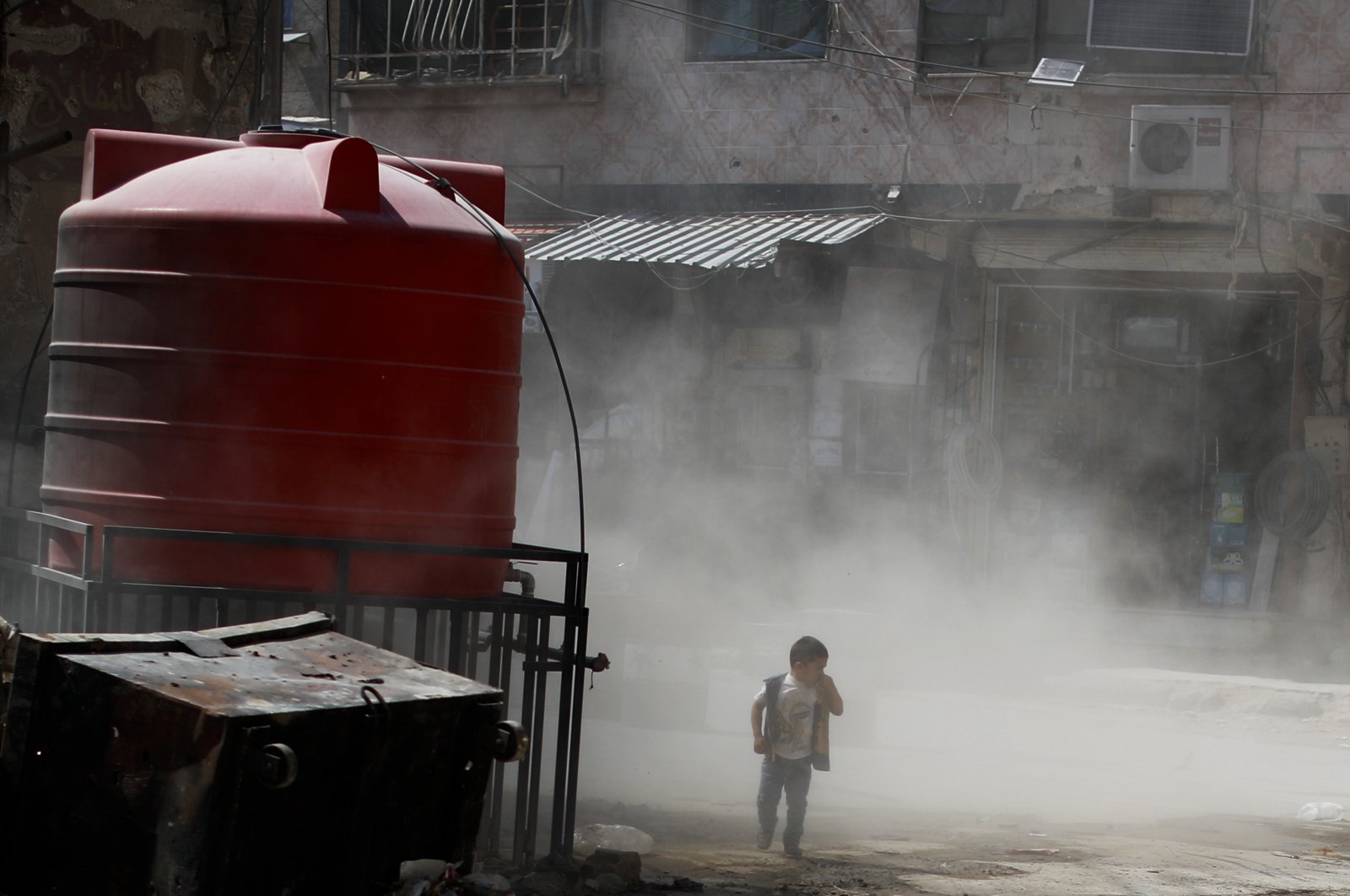 In this Sunday, July 15, 2018, photo, a Syrian boy walks amid a cloud of dust as a bulldozer remove debris from destroyed buildings, in the town of Douma in the eastern Ghouta region, near the Syrian capital Damascus. (AP File Photo)
by agencies Oct 06, 2020 11:26 am
RECOMMENDED

Lawyers representing the victims of chemical weapons attacks in Syria say they have filed criminal complaints with Germany's federal public prosecutor against Syrian officials they blame for the deaths of hundreds of civilians in opposition-held areas.

Germany, which is home to 600,000 Syrians, has "universal jurisdiction" laws that allow it to prosecute people for crimes against humanity committed anywhere in the world.

Attempts by Western powers to set up an international tribunal for Syria have been blocked by Russia and China at the U.N. Security Council.

A spokesman for Germany's Public Prosecutor General (GBA) was not immediately available to confirm the complaint had been submitted.

The complaints are based on what the lawyers say is the most comprehensive body of evidence so far on the use of substances, such as sarin gas, in Syria in Ghouta in 2013 and in Khan Sheikhoun four years later, which killed at least 1,400 people.

They include testimonies from 17 survivors and 50 defectors with knowledge of the Assad regime's chemical weapons program or plans to carry out the two attacks, they say.

"Prosecutors may ultimately determine they have sufficient evidence to issue arrest warrants for members of the Assad regime," said Steve Kostas, a lawyer with the Open Society Foundation's Justice Initiative, one of three organizations behind the complaints.

"This would be a major step in the longer-term process to secure trials against Syrian officials."

A U.N.-commissioned investigation to identify those behind chemical weapons attacks in Syria concluded in 2016 that Syrian government forces had used chlorine and sarin gas.

"It is a small step but it gives us hope that maybe one day we could see justice," said a volunteer medic who was injured while rescuing victims of the attack in Ghouta.

"The world has started to forget about us and our complaints are a reminder that the world has a moral obligation to help put on trial people who used chemical weapons," added the women, who fled to Germany in 2015 and requested anonymity, citing safety fears.

The first trial of suspected members of Assad's security services for crimes against humanity, including torture and sexual assault, started in a German court in April.

The country's prosecutor general has also issued an international arrest warrant for the head of the Syrian Air Force Intelligence on charges of war crimes and crimes against humanity.

"The significance of the complaints is to send a signal to the Syrian regime's main backers – Russia and Iran – that there can be no resolution to the conflict without accountability for crimes against civilians," said Mazen Darwish, director of the Syrian Centre for Media and Freedom of Expression.

According to data supplied by Anadolu Agency (AA), the Assad regime has used chemical weapons in Syria at least 216 times over the last nine years. The regime conducted its first major chemical attack on Aug. 21, 2013, in the eastern Ghouta region of Damascus.

The onslaught raised international concern at the time.

Back in April, the Organization for the Prohibition of Chemical Weapons (OPCW) released a report for the first time that blamed the Assad regime for using chemical weapons.

Following the report, U.S. Secretary of State Mike Pompeo said the OPCW's findings confirmed the continued use of chemical weapons in Syria "and utter disregard for human life."

Chemical attacks on the Syrian towns of Douma and Khan Sheikhoun led U.S. President Donald Trump to carry out missile strikes on Syrian regime targets in April 2018, with the backing of France and Britain.

Hundreds of thousands of innocent people have been killed in the nine years of brutal civil war that have riddled Syria.