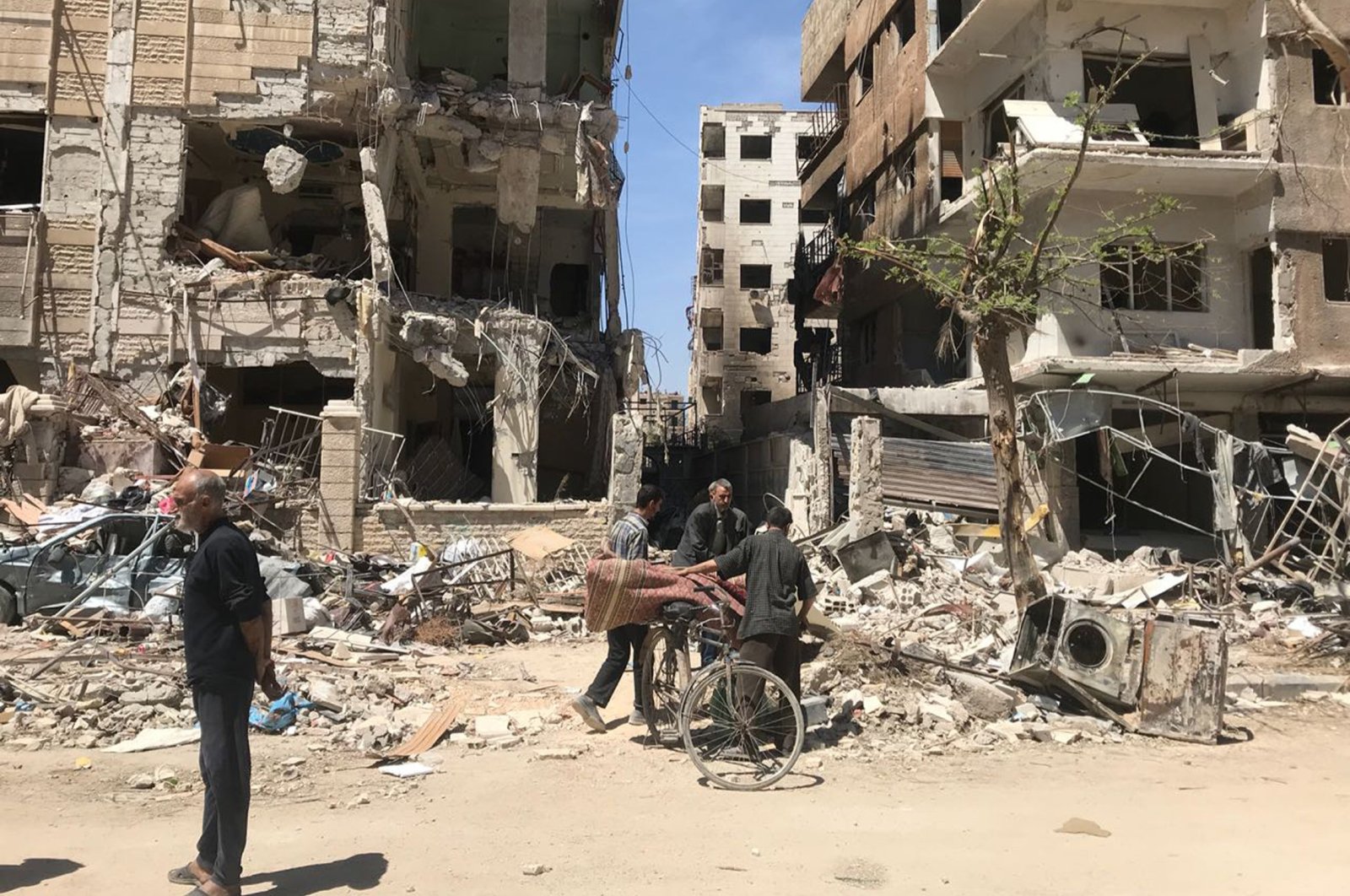 People stand in front of damaged buildings, in the town of Douma, the site of a suspected chemical weapons attack, near Damascus, Syria, April 16, 2018. (AP)
by Daily Sabah with AP Jan 06, 2021 11:26 am
RECOMMENDED

The Syrian regime, backed by close ally Russia, clashed with the United States and other nations Tuesday over a Western initiative to suspend the Syrian regime's voting rights within the global chemical weapons watchdog for failing to provide details of three chemical attacks in 2017 that investigators blamed on the Bashar Assad regime.

The confrontation in the U.N. Security Council foreshadowed a showdown when the 193 member states of the Organization for the Prohibition of Chemical Weapons (OPCW) meet in The Hague, Netherlands in April to consider a French-drafted measure, on behalf of 46 countries, to suspend Syria's "rights and privileges" in the body.

The French proposal was a response to the Syrian regime's failure to meet a 90-day deadline set in July by the OPCW's executive council for Damascus to declare the nerve agent sarin and chlorine, which OPCW investigators said last April were dropped by the regime air force on the central town of Latamneh in late March 2017.

The Syrian regime joined the Chemical Weapons Convention in September 2013, pressed by Russia after a deadly chemical weapons attack that the West blamed on Damascus.

Hundreds of thousands of innocent people have been killed in the nine-year brutal civil war that has riddled Syria. Yet, these attacks were not carried out through conventional weapons alone as the Assad regime repeatedly used chemical weapons. Additionally, no legal process is being conducted for these crimes.

According to data supplied by Anadolu Agency (AA) in 2020, the Assad regime has used chemical weapons in Syria at least 216 times over the last nine years. The regime conducted its first major chemical attack on Aug. 21, 2013, in the eastern Ghouta region of Damascus. The onslaught, which killed over 1,400 civilians, raised international concerns at the time.

Previously, the OPCW requested the annihilation of all chemical weapons and on Aug. 19, 2014, it announced that this process was completed. Yet, it became clear that with the attack in Khan Sheikhoun on April 4, 2017, the regime still had illegal weapons. Over 100 civilians lost their lives in the assault and more than 500 people were affected by the gas.

The U.N. and OPCW Joint Investigation Mechanism (JIM) held Assad accountable for the massacre in Khan Sheikhoun and presented its report regarding the incident to the U.N. Security Council.

In a meeting on Nov. 16, 2017, however, the resolution that would extend the mission of the JIM was vetoed by Russia. Eventually, the JIM had to end its efforts on Nov. 17, 2017. Since the JIM's decision is not enough to put those responsible on trial, there have not been legal steps taken against the regime.

Russia, which backs the regime of Syria's Assad, swiftly rejected the OPCW report, saying that it was "staged." Despite the rejections, activists and world powers continue to accuse the Syrian regime of using chemical weapons against its opponents and civilians.

Ireland's U.N. ambassador, Geraldine Byrne Nason, a new council member, said it was "deeply disturbing" that the OPCW still cannot determine whether the initial declaration was accurate or complete because of gaps and inconsistencies. She said the problems are not "minor" as some would portray, alluding to Russia.

"Over those seven years, the number of issues that need to be addressed has expanded from five to 19," Byrne Nason said. "There have been 17 amendments to Syria's declaration including the addition of a production facility, four research and development centers, and doubling of the amount of declared agents and chemicals."

In addition, she said, there are issues related to "hundreds of tons of missing agents and munitions reported destroyed" before Syria joined the chemical convention as well as recent reports of a production facility that Damascus declared as never having been used, "where there is clear evidence to the contrary."

Norwegian Ambassador Mona Juul, another new council member, also expressed concern at Syria's failure to explain an unnamed chemical that can be used in chemical weapons but also has non-weapons uses. It was detected at the Barzah facilities of the Syrian Scientific Studies and Research Center.

He called the chemical watchdog "seriously ill with politicization." And he accused several unnamed countries of "playing this 'chemical card' to step up pressure on the Syrian regime that they failed to overthrow in the wake of the so-called Arab Spring."

As for the initial Syrian declaration, Polyansky said Damascus was not "an extraordinary case," pointing to amended declarations by Western countries, including France and Germany, as well as Libya. He accused Western delegations of trying to "inflate agitation" around Syria.

French Ambassador Nicolas De Riviere expressed regret at "the false accusations of those who seek to discredit OPCW" and its findings of Syria's attacks.

"There is simply the reality of the facts," he said. "We all know them: the regime used weapons of war prohibited by international law against its own population, and since then we have seen chemical weapons reemerge and become commonplace in Syria and elsewhere."

"These are not hypothetical issues for the thousands of Syrian civilians who have suffered the horrifying effects on the body of nerve agents and chlorine," she said.

The attacks in 2017 were not the only ones that the regime managed to get away with. It has been almost three years since the Assad regime's chemical attack on civilians in Syria's Douma killed more than 41 people and injured more than 500 others. Despite concrete evidence that it used chlorine, the Syrian regime has still not officially been held accountable by international authorities for the massacre. The April 7, 2018 massacre helped the regime take control of the town.

In 2019, it was confirmed that chlorine was used in the attack. The report said there were "reasonable grounds that the use of a toxic chemical as a weapon has taken place on April 7, 2018. This toxic chemical contained reactive chlorine." The long-awaited findings confirmed an interim report, which medics said killed about 40 people when a cylinder containing poison gas landed on the roof of a housing block.

The Syrian regime's deputy foreign minister and former U.N. ambassador, Bashar Ja'afari, accused some unnamed Western nations of using the OPCW "as a platform to fabricate allegations and then justify an assault and aggression on Syria."

The aim, he said, is "to frame the Syrian government for the use of chemical weapons and exonerate the terrorists and the sponsors ... and give them the necessary means to escape through the occupied Golan area through Israel to the capitals of Western states where they can live."

Russia's Polyansky said Syria could not meet the OPCW's anti-Syria demands on Latamneh because it "simply doesn't have" the chemical weapons and facilities the organization is seeking.

"Hopefully, the majority of delegations at the member states' conference in April will reject this provocation, and the West-initiated decision, which is 'punitive' by nature, will not pass," he said.

U.S. Deputy Ambassador Richard Mills said neither the Security Council nor the world "is fooled" by Russia's accelerated campaign to discredit the OPCW.

He urged council members to call on all countries to support the French draft against Syria in April "aimed at promoting accountability for the Assad regime's actions."

"It is time that the Syrian people, and indeed all the globe's people, be allowed to live in a world free of the threat of chemical weapons," he said.