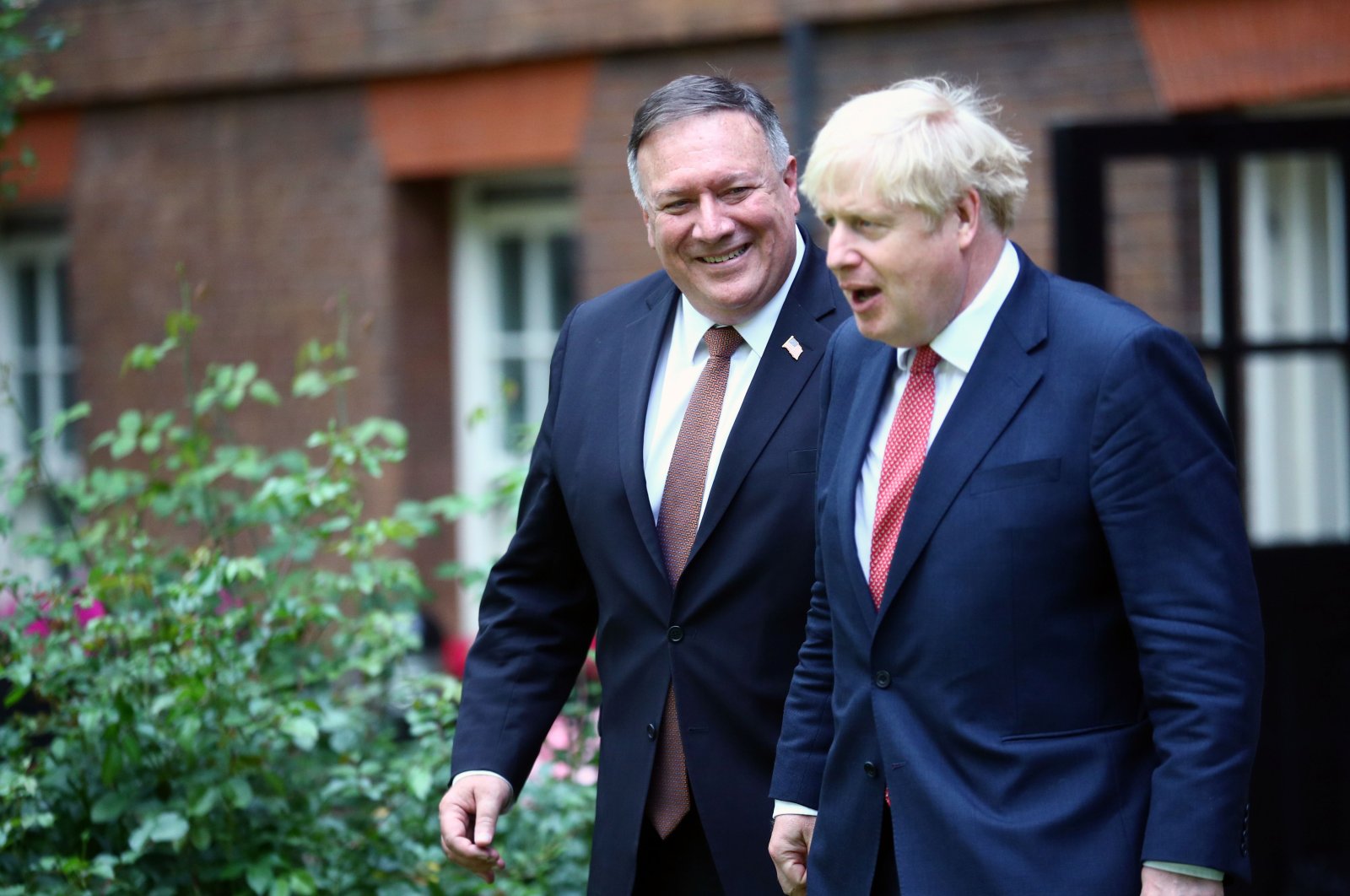 U.S. Secretary of State Mike Pompeo on Tuesday met British Prime Minister Boris Johnson in London in a bid to pull Britain ever closer in Washington's diplomatic tug-of-war with China.

During a trip to London, Pompeo said he discussed 5G telecommunications and a potential U.S.-U.K. trade deal with Johnson.

"Our two countries' long-standing, strong bilateral relationship has laid the foundation for today's candid discussion on issues ranging from 5G telecommunication to our negotiations for a U.S.-UK free trade agreement," he said.

According to a British summary of the discussion Pompeo and Johnson also discussed China's actions in Hong Kong and its treatment of Muslims in Xinjiang.

"They spoke about shared global security and foreign policy issues, including China's actions in Hong Kong and Xinjiang, the situation in Iran and the Middle East Peace Process," a statement from Downing Street said.

The top U.S. diplomat also met with Foreign Secretary Dominic Raab and a hawkish faction of the ruling Conservative party that wants Beijing punished for its treatment of Hong Kong and persecution of more than 1 million ethnic Uighurs and other mostly Muslim minorities.

"Social distance does not imply diplomatic or political distance," Johnson joked as he walked Pompeo into his office on Downing Street.

It was a frosty affair that saw Pompeo accuse Britain of endangering Western intelligence-sharing by putting China at the heart of its next-generation data system.

Britain's relationship with China was then blooming as Johnson sought lucrative partners that could fill the void left by the U.K.'s exit in January from the European Union.

But the months that followed have seen Britain increasingly share the view within U.S. President Donald Trump's administration that China was a global threat.

Pompeo congratulated Johnson for getting "the complete right end of the stick on this one."

The range of steps taken by Johnson in the past month threatens to bring an early end to a "golden decade" in cooperation that former British finance minister George Osborne promised on a visit to Beijing in 2015.

London has also outraged Beijing by offering nearly 3 million residents of Hong Kong a pathway to U.K. citizenship in response to a highly controversial security law that China imposed on the former British colony last month.

Britain followed that up on Monday by suspending its extradition treaty with Hong Kong and extending an arms embargo of "potentially lethal weapons" that had previously applied only to mainland China.

Yet some tensions between London and Washington remain.

Johnson is keen to avoid being too closely associated with Trump, whose approval in Britain is languishing at around 20% despite the "special relationship" between the two historical allies.

The U.K. government stresses that it only ditched Huawei after new U.S. sanctions imposed in May threatened the safety of future 5G equipment produced in China.

But Pompeo said he did not think U.S. sanctions had played a role.

"You suggested they did this because of U.S. sanctions. I don't actually think that's true," he told reporters last week.

"I actually think they did this because their security teams came to the same conclusion that ours have, is that you can't protect this information," he said.

Washington argues that the Chinese Community Party can force Huawei to either intercept U.K. data or shut down the British network in times of war.

Huawei has always denied this was the case.