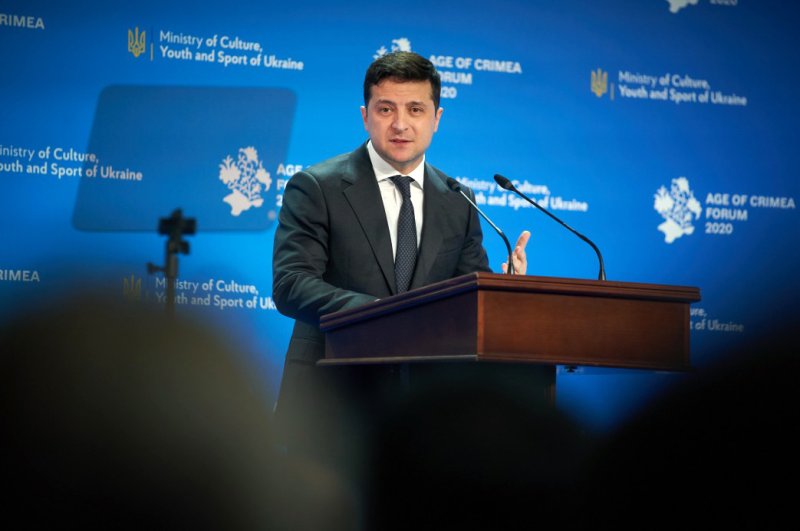 Moscow annexed Crimea in 2014, a move never recognized by the international community, in a largely bloodless swoop after a popular uprising in Kyiv ousted a pro-Kremlin president.

Russia subsequently backed separatists in eastern Ukraine, in a conflict that remains unresolved to this day and has claimed more than 13,000 lives.

Addressing a forum titled "Age of Crimea," Zelenskiy said Feb. 26 would become Ukraine's annual "Day of Resistance to the Occupation of Crimea."

"There are concepts that do not need proof: the week has seven days, the Earth is round and Crimea is Ukraine," Zelenskiy said.

Zelensky's announcement came against the backdrop of renewed efforts backed by France and Germany to bring about an end to the conflict in the Donbass region in the east of Ukraine.

The Ukrainian leader – a former comic actor who took office in May on the back of pledges to forge peace – met Putin for their first summit meeting in December hosted by French President Emmanuel Macron.

But their talks focused on the conflict in eastern Ukraine rather than Crimea, whose annexation gave Putin a huge boost in popularity.

"We are doing everything we can to end the war in Donbass," Zelenskiy insisted while adding: "This does not mean that Crimea is no longer on the agenda or that it could become the price (paid) for peace."

While he remains popular, Zelenskiy has been under pressure from Ukrainians including nationalists and war veterans who have staged street protests urging him not to allow concessions to Russia.

Feb. 26 marks the day in 2014 when thousands of Crimeans rallied in the regional capital of Simferopol to oppose any separation from Ukraine.

Armed men without insignia had appeared in Crimea days before the protest, encircling the Ukrainian military bases and taking under control government buildings. The so-called "little green men" were later confirmed to be Russian special forces.