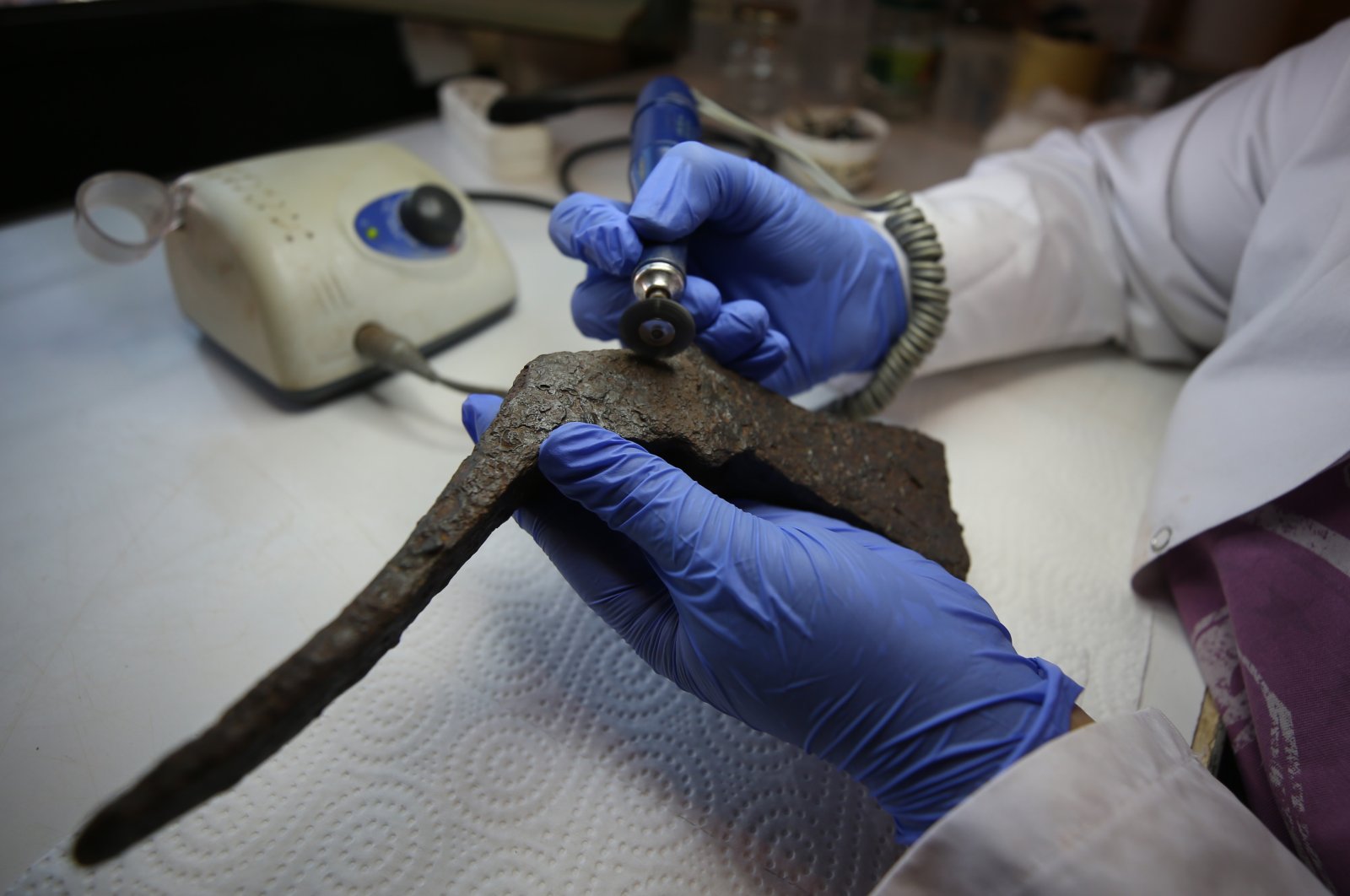 A 1,300-year-old iron machete and ax were unearthed during excavations in the ancient city of Assos, located in Behramkale village in the Ayvacık district of northwestern Çanakkale province.

Assos, once one of the most important port cities of the time, sheds light on the past with various historical artifacts that have been both unearthed and discovered aboveground.

Turkish scientists have been carrying out excavations in the ancient city for nearly 40 years. Recent studies have revealed two metal objects – a machete and an ax – in Assos, providing important information about the lifestyle of the people in the days of yore.

Professor Nurettin Arslan of Çanakkale Onsekiz Mart University's Faculty of Science and Letters Department of Archeology, the head of the excavations in Assos, told Anadolu Agency (AA) that they sustain their work in the ancient city with the support of the Ministry of Culture and Tourism along with the Turkish Historical Society.

Stating that they are working on the Byzantine period, the era of the last settlement in Assos, Arslan said: "The areas we are excavating are the structures mainly used as dwellings. Naturally, the findings we unearthed in these structures, like pots and pans, belong to daily life and tell details about the lifestyle of the age. Therefore, the data they provide is very important for us. However, it is very hard to find intact pottery in these structures. We collect the pieces of the pottery from various areas and try to put the pieces together like a puzzle.”

Reiterating that one of the findings they previously unveiled in Assos was a terra-cotta grill, Arslan added: "Grilling is one of the easiest methods of cooking meat even today. We see that people cooked meat on a barbecue or grill in those times as well."

Arslan also reported that pots used to mix food and to make porridge by boiling grains, such as chickpeas and lentils, on the stove were also among other findings. Expressing that they also found pots in which meals were served and food and beverages were stored, the excavation head continued: "We have a large series of pottery from the Byzantine period, which helps us determine the period of other pottery we found in the city. Besides pottery, we also discovered sharp tools used in ancient times.”

The professor also said they found two mostly intact sharp, metal pieces during excavations this year. "One of the iron objects we found this year is a large iron knife, which we believe is a machete. It was found in Byzantine structures that we call the gymnasium (the training ground for athletes). The second one is an ax-type material that assumingly was used specifically for shaping and chopping wood. Both tools are quite important in terms of preserving their form well despite the long years that they have spent underground. They constitute an important example for the materials used in production in Assos.”