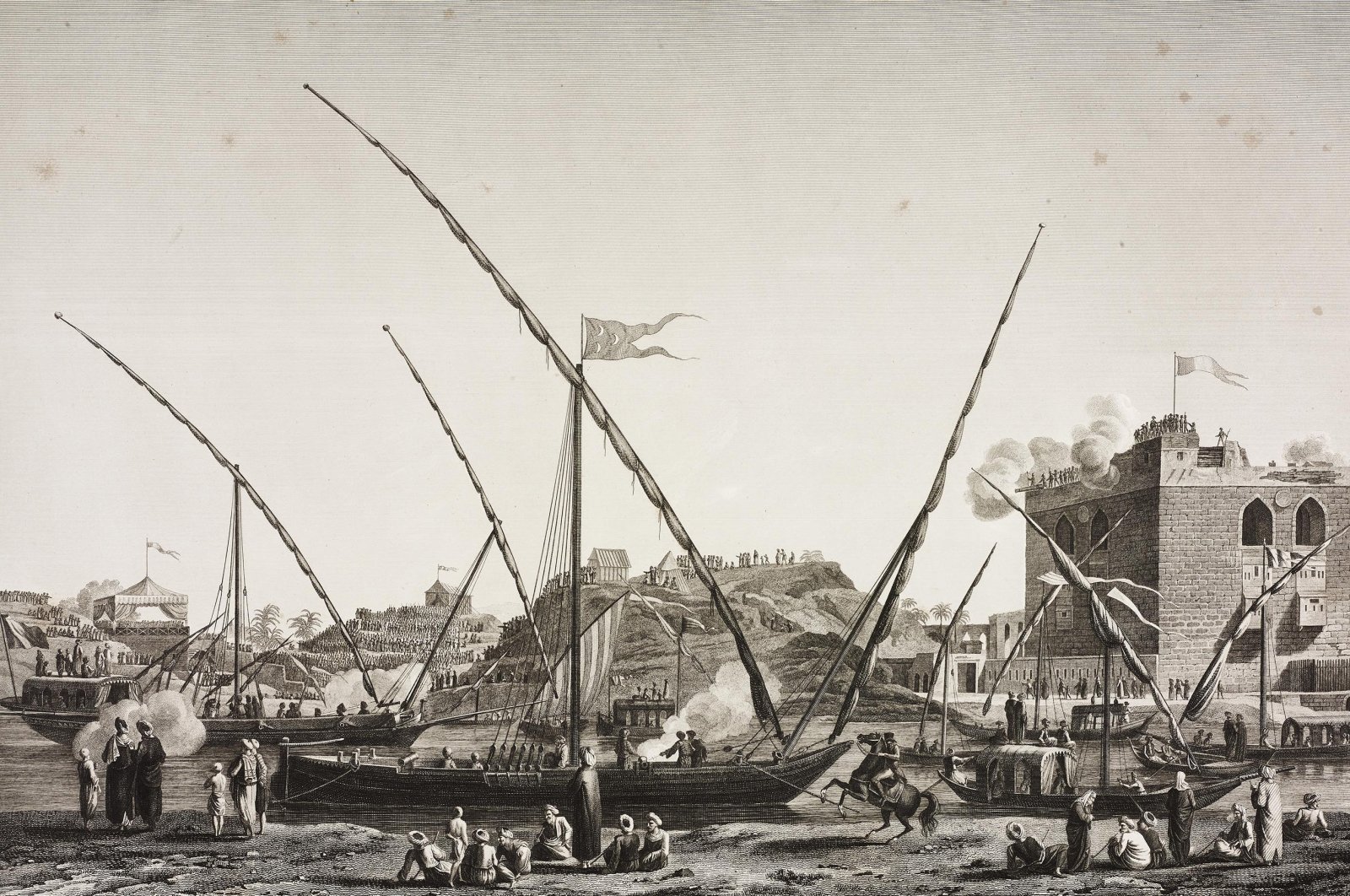 An engraving by Jacques Couche after a drawing by Andre Dutertreview shows a view of the water intake of Cairo canal and the feast for the dam opening which is held every year in Egypt. (Getty Images)
by Mehmet Hasan Bulut
Oct 07, 2021 1:45 pm

The Suez is the most important canal in the world today. But did you know that the canal was originally planned during the time of Islam’s second Caliph Umar and abandoned?

During the reign of the second Caliph Umar, there was a famine in Arabia. The caliph, who was in Medina, sent orders to the provinces to send supplies. Since Egypt and Damascus were far away, aid from these places arrived late. Thereupon, Caliph Umar summoned Amr ibn al-As to Medina. Amr ibn al-As was the Arab commander who led the Muslim conquest of Egypt and was serving as the governor of Egypt during that time.

Amr ibn al-As was among the best commanders of the Prophet Muhammad, the founder of the Islamic state. He was a political and military genius. He defeated the Roman armies and conquered Palestine. As mentioned before, he also captured Egypt in 641, founded the city of al-Fustat there and commissioned a mosque bearing his name.

Caliph Umar and Amr ibn al-As decided to build a canal connecting the Nile and the Red Sea to settle the problem of supply transfer to and from Arabia once and for all. Amr ibn al-As, who received the instruction, returned to Egypt and started working.

Before diving into the works of Amr ibn al-As, let’s look back in history to learn previous efforts to link the Nile and the Red Sea via a canal.

Connecting the Nile and the Red Sea for commercial purposes has been the dream of many emperors throughout history. Aristotle says that the first attempt to build a canal here was made by Sesostris, one of the ancient Egyptian kings. Later, Pharaoh Necho II (who reigned between 610–595 B.C.) wanted to build a canal connecting to the Red Sea via Wadi Tumilat and Lake Timsah, also known as Crocodile Lake and the Bitter Lakes – but he didn’t succeed.

The Persian King Darius I, commonly known as Darius the Great, (reigned between 521-486 B.C.) was destined to complete the project Pharaoh Necho started. The canal commissioned by Darius was wide enough for two ships, and it took four days to reach the Red Sea from the Nile through it.

Over time, the canal filled up with mud and became clogged. Ptolemy II Philadelphus, son of Ptolemy I – one of Alexander the Great's Macedonian generals – had the canal line dug again. Moreover, he took measures to prevent saltwater from mixing with the Nile. Crocodile Lake and Bitter Lakes were filled with fresh water from the Nile. In this way, new settlements were established in this region.

When the Roman Emperor Augustus (reigned between 27 B.C. and 14 A.D.) conquered Egypt, the canal was out of use. Roman Emperor Trajan (reigned between 98-115 A.D.) took advantage of the existing waterways and built a new canal bearing his name between the Nile and the Red Sea. He connected it to a stone port he had built at the Fortress of Babylon in Old Cairo. This canal, which formed the western line of Cairo, led to the Suez via Wadi Tumilat and Crocodile Lake, as in the unrealized project of Pharaoh Necho. But this channel also became unusable after 300 A.D.

Amr ibn al-As knew Egypt and the canal line well as he was engaged with trade before embracing Islam. The new canal was dug close to the old Roman line. In order not to hinder the growth of the city of al-Fustat, the port, which forms the Cairo part of the canal, was moved to the north around Sayyida Zaynab Square.

Under the direction of Amr ibn al-As, the canal project was completed in just six months and was dubbed the Amir al-Mu’minin canal. It was about 138 kilometers (85.7 miles) long, and 20 ships loaded with 6,000 cubic meters (211,888 cubic feet) of grain passed through this channel in the very first expedition en route to the Arabian port of Jeddah.

The Amir al-Mu’minin Canal was clogged due to neglect during the reign of Umar ibn Abd al-Aziz, the eighth Umayyad caliph, but it was later cleaned and reopened. The channel was used for many years, but when some revolts broke out in Mecca and Medina in 754, Caliph al-Mansur had the canal closed to stop the flow of supplies there.

The canal, which later served as an underground water canal for the city of Cairo, was also used to irrigate the lands in the north of the city. It was closed as a health measure in a cholera epidemic in 1896 and remains unused to this day.

Amr ibn al-As also wanted to open a channel to connect the Mediterranean Sea with the Red Sea and presented this idea to Caliph Umar. However, Umar thought that if a canal between these seas was opened, the security of the capital would be weakened by the ships coming from the Mediterranean and did not allow it. Thus, the Suez Canal project was delayed for centuries.