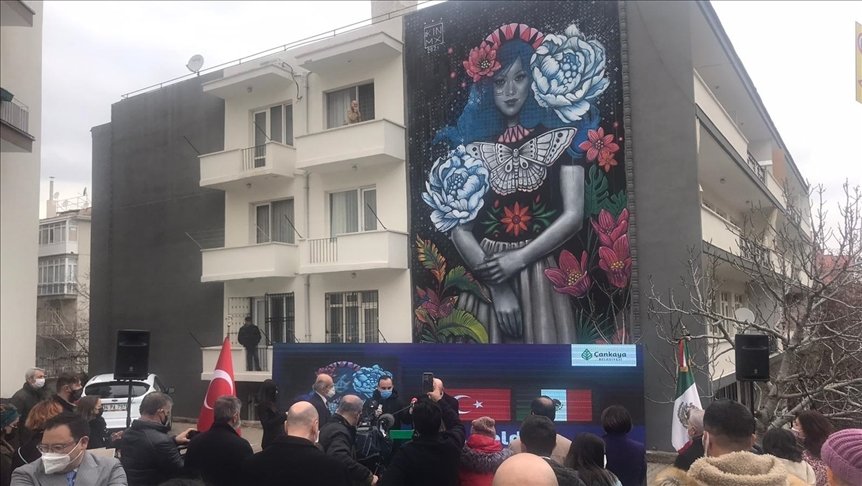 A beautiful mural portraying a woman infused with color and traditional Mexican patterns and clothing brought color to the Turkish capital Ankara. Attracting a great deal of attention, the mural was painted by Mexican artist Kathrina Rupit on a wall on Güvenlik Street in the city's Çankaya district.

"Blossom" was unveiled with a ceremony attended by many representatives of diplomatic missions in Ankara, including Mexico's Ambassador to Turkey Jose Luis Martinez y Hernandez and the deputy mayor of Çankaya District Municipality, Gülsün Bor Güner.

During his remarks at the unveiling, Martinez underscored that he hopes the mural will contribute to the city's street art scene.

"We aware that in Ankara, as in other urban areas in the world, there is an increasing relevance in this field, so I am sure we will be seeing more and more murals in the near future," he said.

Rupit has been painting walls for more than 10 years. "You can find my work in countries like the U.S., Ireland, the U.K., Spain, India, Portugal, France, Mexico," she said.

For her "Blossom" mural, she said that it took her three or four days to finish it. The mural, which measures 15 by 20 meters (49 by 65 feet), aims to contribute to the strengthening of friendly ties between Mexico and Turkey.

Underlining that the reaction has been amazingly positive to the mural, she hoped this project could open doors for the municipalities to engage in more large-scale murals.

Rupit does more than street art. She also presents some of her paintings with augmented reality to help the viewers go deeper into the artist's inner world. Giving an example, the artist told Anadolu Agency (AA) that she used a mix of old philosophy and new technology in her piece called "Heart Coherence." "I wanted to bridge our past with our future while envisioning the process of the ego and its dissolution. Here I have represented the ego as a mask," Rupit said. You can see the woman finally takes off the mask and gets rid of her ego through the mobile application 'Artivive,'" she stressed.

A viewer holds a smartphone or a tablet close to the painting, and music was added to the visual effects in the app. "It blends the topic of identity and the relationship of the ego with fulfillment and coherence around the body. This is also an important meditation that has been proven by science to help the human body heal any illness and also help to cultivate inner peace," she added. "In my art, you will find different cosmologies that in essence explain our existence in this world and a way of life in harmony with the circumstances around us," the artist continued.

She also participated in the ArtAnkara International Contemporary fair, held between March 29 and April 3 this year. As a contemporary artist, she has exhibited her artwork internationally in collaboration with galleries and art centers in Mexico, Europe and the U.S. along with international organizations such as Greenpeace, the United Nations, Amnesty International, Street Art for Mankind and more.