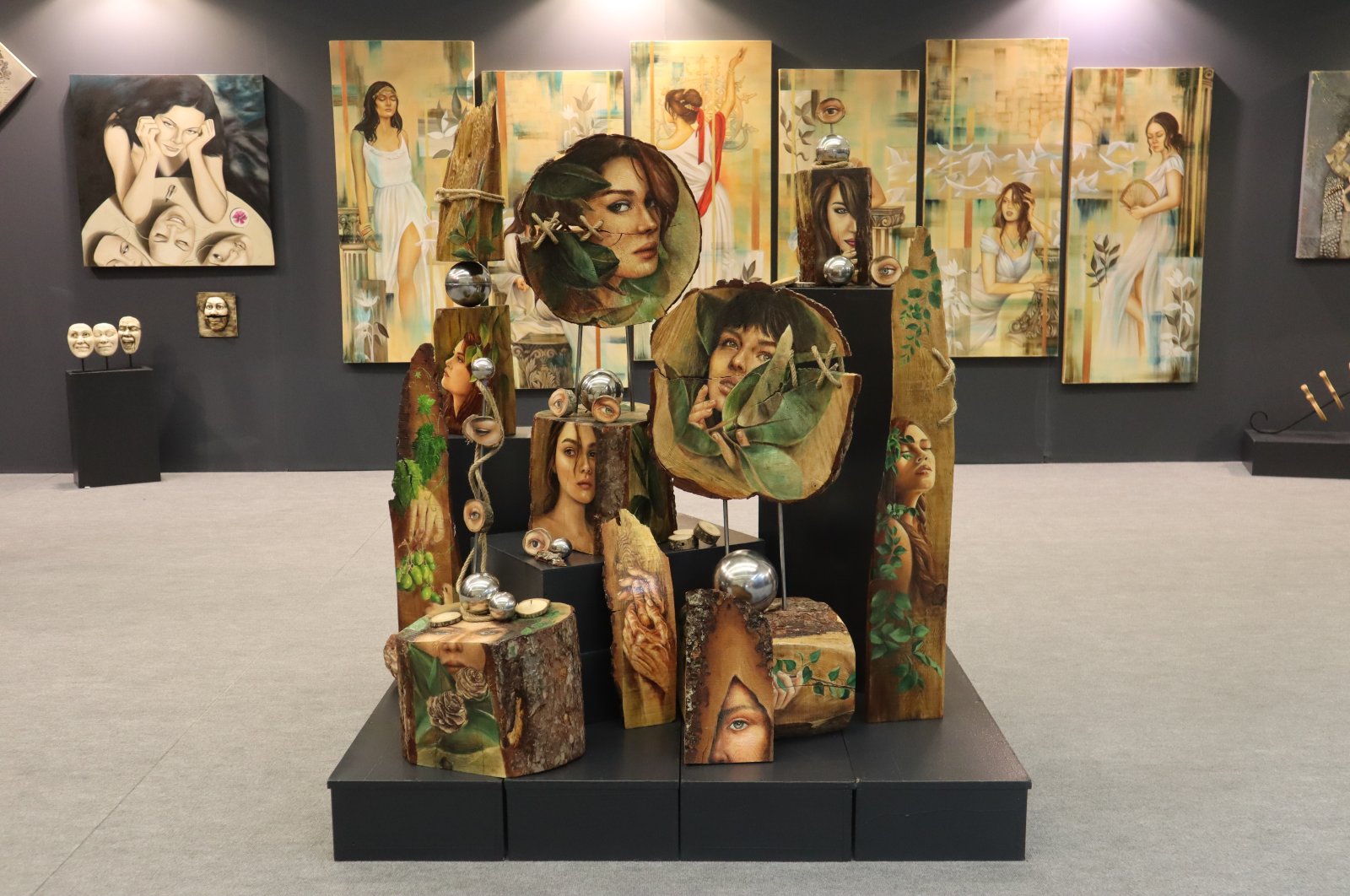 Artworks on women made by female teachers working at the Ankara Metropolitan Municipality are seen in this photo at the contemporary art fair ARTANKARA, Ankara, Turkey, March 30, 2021 (Photo by Dilara Aslan)
by İREM YAŞAR - Dilara Aslan
Mar 31, 2021 12:40 pm

The 7th Contemporary Art Fair ARTANKARA is being held with the participation of 107 galleries in the Turkish capital. Who's at the fair and what works await enthusiasts?

The seventh edition of ARTANKARA, an international contemporary art fair, was launched in the Turkish capital Ankara on March 29 with a preview, award ceremony and opening concert. Hosting 107 art galleries along with nearly 1,000 artists in Ankara Congresium, the fair will remain open for visitors until April 3.

After the coronavirus pandemic hit the art sector like many others, the market experienced a huge recession. The sector tried to prevent this recession through many online activities and platforms. Now ARTANKARA is supporting the sector by hosting the first physical fair of 2021 in Turkey. Strict measures specified by the Ministry of Health, including disinfection and limiting the number of visitors, have been implemented for the fair.

Many important figures, including Culture and Tourism Deputy Minister Özgül Özkan Yavuz, Ankara Mayor Mansur Yavaş, Deputy Foreign Minister Faruk Kaymakçı and Interior Deputy Minister Tayyip Sabri Erdil, attended the opening ceremony of the event. Speaking at the ceremony Yavuz said: “We came together on the occasion of art that unites and heals us after a long time. The Greek physician Hippocrates said ‘life is short, art is eternal.’ For this reason, we try to continue many activities.”

Following the speeches, the traditional honor awards of the fair were presented to their owners. The Ankara State Art and Sculpture Museum, home to some of the most valuable works of Turkish art history, received the "ARTANKARA Institution Honor Award." While late businessperson Mehmet Balkan was granted the "Contribution to Art Award,” Turkish painter Mehmet Güleryüz was presented with the “Artist Honor Award.”

ARTANKARA features a myriad of impressive paintings, sculptures, glassworks and installations. The fair also presents workshops and conferences where significant figures from the art world share their knowledge and experience.

Ranging from paintings, glass and wood art, installations, iron, marble and stone sculptures and even fabric, a variety of artwork is waiting to be discovered at the fair. But who's at this year’s edition and what works await enthusiasts? Let’s explore together.

One of the prominent participants of the fair is the Art for Goodness Association. Aiming to contribute to the development of art in Turkey since 2016, the association presented three projects and works at the fair. The association’s first project is “One Year in Passage” and it provides more advanced education to new graduates from Mimar Sinan Fine Arts University in Istanbul. It then commissioned the project “Impressions from Anatolia,” which supported the education of young artists at the faculties of fine arts of universities in Anatolia. The association also founded the project “Workshop Cer” with the participation of professional artists. Therefore, the association is exhibiting 49 works both by art students and professionals at ARTANKARA.

Among these works, artist Şevket Sönmez’s oil painting titled “Rüya” (“Dream”) captures attention as it portrays a famous photo of Princess Diana sleeping at the “Splendours of the Gonzagas” exhibition gala. After falling asleep in a chair at the event, she earned the nickname “Sleeping Beauty.” And Sönmez depicts this scene so vividly that it takes you back to the 1980s.

Tolga Turan’s wire sculpture reminded me of similar work I had a chance to see last year. The association’s works were displayed at Step Istanbul, an art event organized with the mission of contributing accessible art, in November last year. Özge Günaydın’s "Sameness," comprising of 10 small bronze sculptures, was among these works. The sculptures were very successful in communicating a problem of modern people. The artist showed how authenticity and originality fade away and people become like peas in a pod in modern times. The shape of Turan’s wire sculpture resembles the bronze figures of Günaydın invoking similar feelings in me.

Ahmet Algül also showcases three works at the booth of the association at ARTANKARA. Algül’s works titled “Yerin Yüzü” (“Face of the Earth”), “Karlı Tepe” (“Snowy Hill”) and “Sakinlik” (“Tranquility”) are all prepared on medium-density fibreboards with a very unique style combining a kind of photographic precision with geometric shapes. While the works offer a piece of nature, they also highlight their artificial, man-made side by suggesting a balance and order with shapes.

Apart from the Art for Goodness Association's works, the impressive pieces by Cem Sağbil, an artist holding the artist of the year award given by Sanat Kurumu Association in 2007 and boasting several works abroad, instantly catch one’s eyes.

“The cultures originating from Anatolian lands are my main focus. This is the country of mother goddesses,” Sağbil told Daily Sabah on his works that include sculptures of the Anatolian mother goddess Cybele and Aegean mythology.

Sağbil’s exhibition revolves around different periods of his 40-year art life. Most of the works are made of bronze casting and lost wax techniques that used to be applied in ancient times. “But art is a concept. I am not limited to any specific material and may express myself in any way. What is important is to convey the idea to people and express myself,” he pointed out.

Sağbil, who has lived and received education in Germany for 20-25 years, has also held solo exhibitions abroad including in Germany’s Karlsruhe, Stuttgart, Berlin as well as Paris, Boston and Nicosia (Lefkoşa).

He highlighted that he is the only Turkish artist with bronze sculptures exhibited in the open air in the middle of Paris.

“I work on the concepts of being western and eastern as well as dualism. Everything exists with its opposites,” he stated, adding that his latest works also focus on mother nature and its fertility. “We have to be in harmony with nature and stop killing it for the sake of changing it to be compatible with humans. We have seen the power of nature once again when a tiny virus has affected the whole world.”

Speaking on one of his sculptures that attracted significant attention during the fair – a man resisting a piece of glass that has cracks – Sağbil touched upon the need to resist the pressure from outside.

Within this scope, the Ankara Metropolitan municipality opened a gallery consisting of the works of several women that teach art as part of the municipality’s cultural and social affairs department’s vocational courses, an official told Daily Sabah.

“We determine a theme and work one year on that theme – this year the theme is women. If the fair had not be delayed due to COVID-19, it would have coincided with March 8 Women’s Day week,” the official elaborated, reminding that last year’s theme was Ankara but that this year's theme was chosen to raise awareness about developments and incidents experienced by women. The artworks depicting women consist either of solo or collective works and are added to the municipality’s collection.

The galleries in the fair do not only consist of local artists but also include artists from different parts of the world. For example, the Ukrainian and Mexican embassies in Turkey had also opened their galleries with artwork of their local artists. Among the artists of the Mexican embassy is Kathrina Rupit, currently based in Ireland's Dublin, who started her career with street art at the age of 13 in Mexico. She draws inspiration from Mexico and her daily life combined with her perception of current issues. The artist uses recycled material in her works to raise awareness about the environment.

Among the many galleries, another interesting spot was the gallery Tuz Buz, which exhibited smithereens in frozen ice with the motto “the fate of the cycle is spiral.” According to the artist Caner Yedikardeş, accompanied by crackings and smashings, each represents a reunion with a moment or memory frozen in the spiral with the motion of water. The smithereens might be the remnants of porcelain tableware, but hide a traffic accident or traces of an earthquake experienced long ago. Broken glasses from a bottle might be from a quarrel, company of someone or solitude.

Visitors of the fair were also amazed to find original works of renowned artists Pablo Picasso, Henri Matisse and Jackson Pollock in the booth of Istanbul's prominent Gallery Selvin. Owner and curator of the gallery, Selvin Cuhruk Gafuroğlu, is selling Picasso’s work that is believed to be from the 1930s, for 34,000 euros ($39,886). The piece is a sketch of Picasso's painting “The Young Ladies of Avignon.”