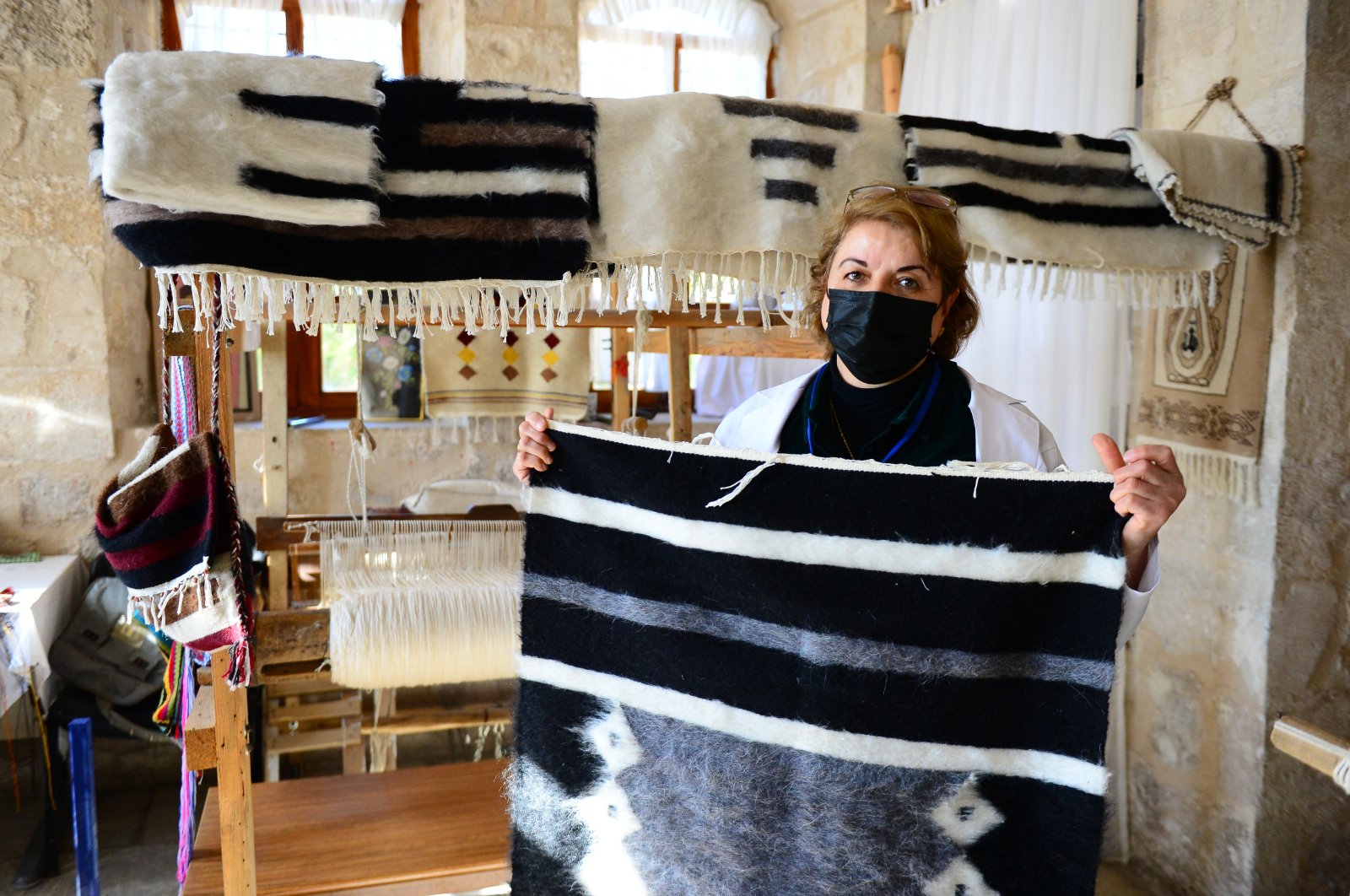 In a historical building turned into a technical institute in Mardin, the weaving culture of southeastern cities is handed down to the next generations through research and production of original motifs

The ancient weaving styles of southeastern Turkey, which has been the cradle of different civilizations for thousands of years, are being revived in Mardin province. In the historical madrassa that was turned into the Mardin Technical Institute in the city, master trainers weave products in line with their original patterns.

Turkey is renowned for its weaving culture practiced with different styles and motifs all across the country. While crafters weave spellbinding silk fabrics featuring historical motifs on special Ottoman looms in the northwestern city of Bursa, the woven products of the southeastern provinces of Mardin, Şırnak and Siirt generally include carpets, rugs and blankets. Additionally, some Turkish artisans dye ropes with natural madder so that weavers can use quality materials in their products.

Dedicated efforts have also been ongoing across Turkey to ensure the survival and prosperity of traditional weaving. For example, the women of the Sivrihisar district in the central province Eskişehir have been restoring antique rugs with modern weaving techniques. The Mardin Technical Institute is now setting its own example of these efforts.

The institute's historical building was built in two blocks as an Ottoman junior high school on May 11, 1892, on the ruins of the 700-year-old Muzafferiye Madrassa. Located at the foot of Mardin Castle, the building went on to serve as a secondary school, the Mardin High School, a commercial high school, a girls’ institute, a girls’ vocational high school and a primary school. The structure, which was restored by the governor’s office and has been providing education as the Mardin Technical Institute since 2010, now houses efforts to revive dying artistic disciplines like weaving.

A workshop was created in the institute to preserve the weaving culture for future generations. A research team first investigated the weaving culture in southeastern Mardin, Siirt and Şırnak provinces and then master trainers started to weave products such as rugs, blankets, runners, sofa covers, prayer rugs and saddlebags in line with information provided by the research team.

Mardin Technical Institute Director Metin Değer told Anadolu Agency (AA) that the structure, built during the era of Sultan Abdulhamid II (1876- 1909), was turned into an institute and opened by first lady Emine Erdoğan 11 years ago.

Noting that research, promotion and educational studies have been ongoing at the institute since then, Değer said that they have been researching, designing, producing and promoting all cultural values belonging to the regions of Mardin, Şırnak and Siirt.

Değer said they are producing on the basis of research carried out on the regional weaving culture, adding: “In particular, we are producing jirki rugs and şal şepik fabric belonging to Şırnak, and Siirt’s blankets, runners and prayer rugs made of angora wool through traditional methods and on traditional looms. We have also started weaving products belonging to Mardin on a ground loom called a tevn. We have produced our first products that are original and high-quality.”

Değer said they produce pieces based on techniques that date back as far as 500 years ago. “It excites us to connect with history. We are honored and proud to reconnect with our past, our culture and our tradition and transfer this culture to the future,” he stated.

Değer emphasized that each product is made in accordance with its original style, and they can be displayed in exhibitions and fairs at home and abroad, continuing, “At the same time, we save them in the archive book and store a sample of each as examples for the next generation.”

Gülhayat Acabey, a master trainer who works on the type of weaving characteristic of Siirt, noted that the plain weaving in Siirt has a rich intensity of motifs. Acabey said Siirt products usually feature various motifs, such as cleat, hands-on-hips, fertility, cocklebur, hand and finger, comb and star. "We are practicing the Siirt weaving, which was made of flocculent angora wool during the Seljuk period," she said.

Canan Narcıoğlu, a master trainer who practices the type of weaving used in Şırnak, said that they are weaving products that are unique to the city, especially the jirki rug, which is an important part of the cultural heritage in the region. According to Narcıoğlu, they weave about 50 regional motifs such as wolf mouth, hook, scorpion, earring and bird, and they use genuine wool yarn and madder in an attempt to keep this culture alive.

Birgül Kaya, who works with the tevn weaving style of Mardin, expressed that this handicraft, which was completed on looms in houses and produced using primitive methods, has rarely been created by dedicated women in recent decades.

Kaya stated that some families have sustained this type of weaving for daily use and trousseaus, adding: “It is a kind of weaving made on a ground loom. It is very old and more like a weaving type of the nomadic era. We are trying to adapt it to the present day and keep it alive. We have been weaving like this in our region for centuries.”