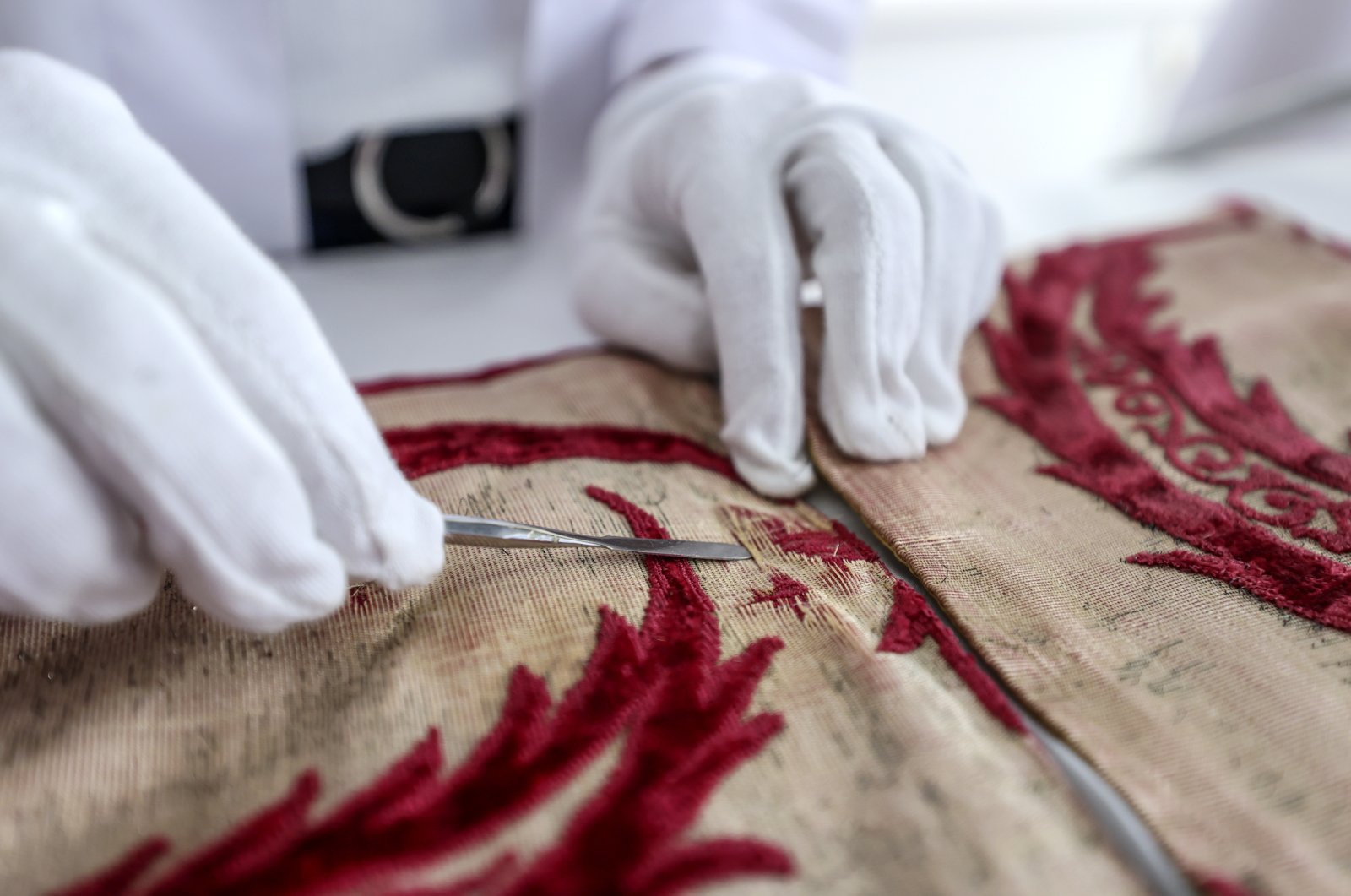 A close-up of a hand of a restorer while working on Sultan Suleiman I's caftan at the National Palaces Textile Workshop, Istanbul, Turkey, Sept. 16, 2021. (AA Photo)
by Anadolu Agency Sep 17, 2021 2:16 pm
RECOMMENDED

Restoration work has begun on the ceremonial kaftan (a variant of the robe) belonging to Ottoman Sultan Suleiman I, also known as Suleiman the Magnificent, at the National Palaces Textile Workshop.

The kaftan, decorated with tulip patterns among the leaves, is being restored using digital texture analysis, which is a rare technique in the world.

Topkapı Palace, which is affiliated with the Presidency of National Palaces, has one of the most famous collections in the world of rich Turkish fabrics and sultan's attires sewn with these fabrics. These priceless attires are maintained and protected by the National Palaces Textile Conservation and Restoration Workshop.

Speaking to Anadolu Agency (AA), Başak Birsel, head of the National Palaces Textile Restorations Workshop, said: "The ceremonial kaftan belonging to Suleiman the Magnificent, which is under restoration at our workshop, was sewn from Italian velvet, which was specially woven for the sultan. It has tulip patterns, which are among the classical Ottoman motifs."

Stating that there are three works under restoration at their workshop recently: "In addition to Suleiman I’s kaftan, there are two more important works in our workshop. The first is a fur used by Sultan Ahmed III. The outside of the 18th-century attire is covered with red broadcloth. The collar, front edges and inside are decorated with brown sable and white ermine fur. The second is an attire that did not directly belong to a sultan but was used as a ceremonial kaftan in the 16th century."

Stating that they performed digital texture analysis before the restoration, Birsel said that this was necessary to guide the conservation process. "After the application plan we have prepared, we procure materials suitable for the original texture of the work and start the restoration process. The kaftan, which dazzles with its craftsmanship and historical quality, will also be presented to the visitors."

The restored attires will be exhibited in the Dormitory of the Expeditionary Force, located in the third courtyard of Topkapı Palace.

The collection of sultans’ attires is based on the tradition of keeping Ottoman sultans' and şehzades’ (prince) clothes bundled and stored in the Enderun Treasury. The collection includes clothes that the sultans left to the treasury while they were alive or those that were transferred to the treasury after their death. The collection, which contains the richest examples of Ottoman fabric art, attires from the period of Sultan Mehmed II – commonly known as Mehmed the Conqueror – to the period of the last Ottoman Sultan Mehmed VI Vahideddin are present.