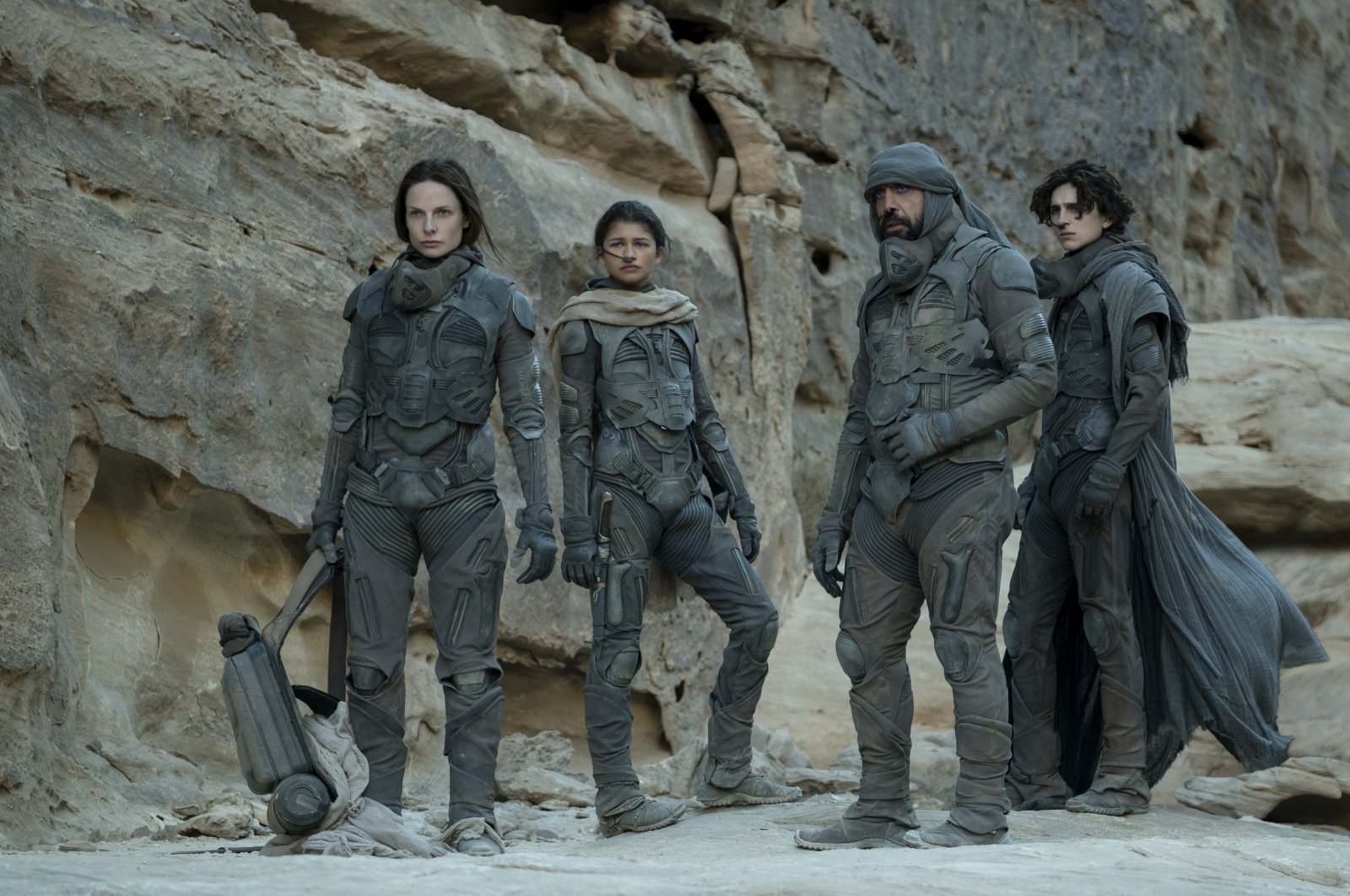 From left to right, Rebecca Furguson as Lady Jessica Atreides, Zendaya as Chani, Javier Bardem as Stilgar and Timothee Chalamet as Paul Atreides in a scene of the film "Dune." (dpa Photo)
by German Press Agency - DPA Sep 09, 2021 5:30 pm
RECOMMENDED

Many directors have tried to adapt the exciting story of the groundbreaking novel “Dune” by Frank Herbert to the big screen in the past. Unfortunately, almost none of them managed to succeed in this tricky business.

A project by Ridley Scott, for example, did not even get off the ground, just like a film in the 70s in which Salvador Dali, Mick Jagger, Pink Floyd and artist H.R. Giger were supposed to be involved.

Director David Lynch then turned it into a feature film in 1984, which flopped spectacularly at the box office.

Now Canada's Denis Villeneuve, the director of "Arrival" and "Blade Runner 2049,” has taken a chance on the original and is preparing for an international release of a multi-million dollar blockbuster with an impressive star cast in September and October.

The setting is the desert planet Arrakis, also known as Dune, home to the valuable substance Spice.

Because of this, the planet, along with its oppressed inhabitants, the Fremen, has long been exploited by other powers in the galaxy.

The story of "Dune" begins in the year 10191 when Duke Leto Atreides, played by Oscar Isaac, receives the order from the Emperor to take over the mining on Dune.

Together with his son Paul, played Timothee Chalamet, and his mother, played by Rebecca Ferguson, he travels to the desert planet. He hopes for peaceful cooperation with the Fremen, but soon realizes that he has ended up as the emperor's plaything and in the middle of a power struggle with other rulers such as Baron Harkonnen, played by Stellan Skarsgard. The Atreides family is attacked, the desert city reduced to rubble.

You can see in every shot how big the budget was for this film: airplanes resembling metal hornets, fireballs falling from the sky, gigantic sandworms emerging from the desert, armies fighting each other in futuristic outfits – you can't get much more powerful than that on the big screen. All this is set to the menacing music of composer Hans Zimmer.

But "Dune" is not all action and spectacle with the classic battle of good versus evil. The film is about greed and exploitation, imperialism, oppression and rebellion. In around two and a half hours, Villeneuve repeatedly builds in subtext and room for interpretation.

It is certainly no coincidence that the Fremen wear clothes like the people in the Arab world.

Young Paul has a special role to play: as heir to the throne, he must find his own way, trust his talents and thus become a beacon of hope for a peaceful future. The 25-year-old Chalamet embodies this perfectly – as a lanky and underestimated son as well as a fearless fighter.

Villeneuve thus achieves a rare feat: his "Dune" is blockbuster cinema in the best sense, makes the screen shake and is worth every penny of the ticket. But fans of arthouse cinema will also get their money's worth, as "Dune" is cleverly told will leave you with lots to think about.

"This is just the beginning," says the young Fremen fighter Chani, played by Zendaya, shortly before the end of the film. Because this is also clear: this work is set up as the prelude to a multi-part series like "Star Wars."

Villeneuve wants to tell at least one more film from this universe. But will he succeed and will his "Dune" not fail in the same way as its predecessors? That will probably be decided at the box office in the next few weeks.