'Dune is dream come true': Villeneuve, Chalamet over the moon 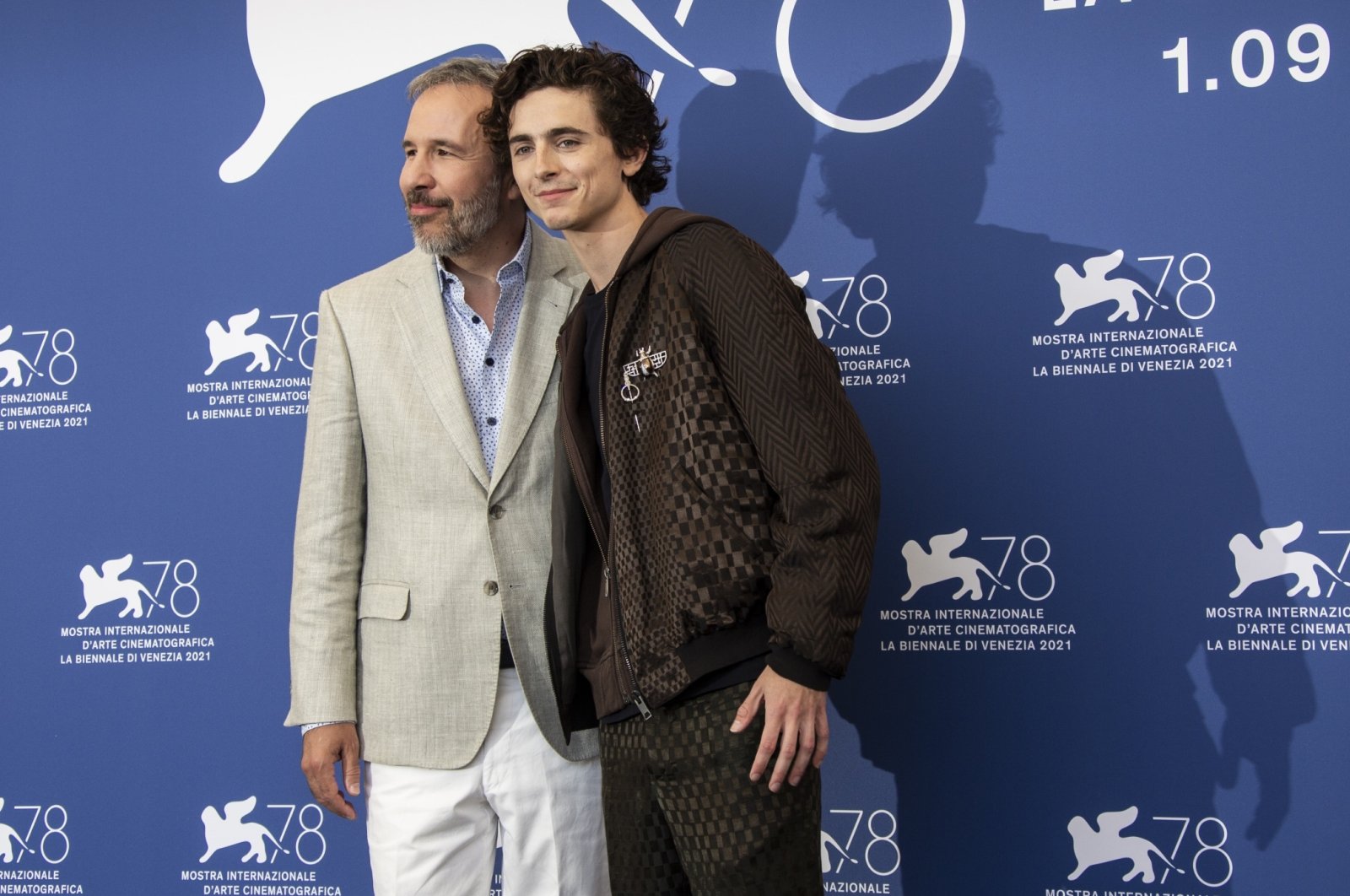 Denis Villeneuve (L), and Timothee Chalamet pose for photographers at the photocell for the film “Dune” at the 78th Venice Film Festival, in Venice, Italy, Sept. 3, 2021. (AP Photo)
by Associated Press Sep 06, 2021 11:40 am
RECOMMENDED

The hour has finally arrived for Denis Villeneuve's much anticipated adaptation of Frank Herbert's "Dune" with its world premiere at the Venice Film Festival on Friday wowing viewers. Director Villeneuve said his vision for the project was always to make two films, but that even if they don't get to make a sequel, it was already a “dream” come true for him and his star Timothee Chalamet.

"Simply put, this was the honor of a lifetime for me," Chalamet said Friday at the Venice Film Festival. "I hope we get to do a second one. It would be a dream ... (but) it's already been a dream come true."

Chalamet, Villeneuve, Zendaya, Oscar Isaac, Rebecca Ferguson, Josh Brolin and Javier Bardem all gathered to discuss the film at a news conference before its world premiere Friday night on Venice Lido. It is not debuting as part of the competition slate, but it is one of the most anticipated films of the year after a lengthy delay in release because of the coronavirus pandemic.

Based on Herbert's 1965 science fiction classic, "Dune" is a heroic tale of a rising duke, intergalactic power struggles, a precious spice and lethal spaceworms and it has both inspired and bested some of the best filmmakers.

Chalamet plays the young hero, Paul Atreides, who is being groomed to lead when his family learns that they are to rule and protect the hostile desert planet Arrakis, home to the universe's most valuable resource.

Though it's a tale that has inspired many creative minds, it's also one that's bested them. Alejandro Jodorowsky tried to adapt it in the 1970s, but after years of development and a script that would have resulted in a 14-hour movie, the money came up short and the rights ultimately lapsed. The almost-film even became the subject of a 2013 documentary, "Jodorowsky's Dune."

Ridley Scott spent seven months in development on another version before dropping out and making "Blade Runner" instead. Then David Lynch stepped in. His film, starring Kyle MacLachlan and released in 1984, bombed at the box office, and did not impress critics.

But Villeneuve, the director behind ambitious and cerebral space epics like "Arrival" and "Blade Runner 2049," was not deterred by the wreckage that had come before. Villeneuve had his own vision that he'd been dreaming up since he first discovered the book as a teenager. And with the support of Legendary and Warner Bros., a reported $165 million at his disposal, the promise of a sequel and an extra year to perfect it as a result of COVID-19 related delays, Villeneuve made his "Dune." And now he's ready to put the rest of the world under its spell too.

The biggest challenge, he joked, was to "deal with and master" Chalamet's hair "because it's alive." In reality, the trickiest part was finding a balance between making a film for die-hard "Dune" fans, which he and composer Hans Zimmer are, and those who know nothing about it.

"When Frank Herbert wrote Dune in the 60s, back then it was doing like a portrait of the 20th century, but it became more and more a prediction of what would happen in the 21st," he said. "Sadly the book is far more relevant today ... I wish it were not the case, but I think the movie will speak more to the world right now more than it would have 40 years ago."

For the actors, it was more than a science-fiction spectacle: It was a cerebral and emotional experience. Isaac, who plays Paul's father, was often contemplating the weight of playing a character who is knowingly marching toward his demise. As Lady Jessica, Paul's mother, Ferguson relished in the tension between being a mother and a devotee of her ancient religion.

Chalamet said he leaned on everyone in the cast at some point for emotional support, and one of the most meaningful bonds was between director and star.

"We had a strong communication and an ideal relationship," Chalamet said, switching to French for a bit.

"I had trust and confidence in Timothee from the very beginning of the shooting," Villeneuve said, also in French. "At the chance to work with Charlotte Rampling, he was afraid at the beginning, but everything went perfectly ... I understood there his power as an actor ... I cried for his ability to interpret the character. I am sure I was not wrong in choosing him."

Zendaya has a smaller role in the film, in terms of screen time and days on set, but her character will become more central should a sequel happen.

"It was intimidating and scary, but as soon as I got there, there was such a warmth and embrace," she said. "I was only there for a few days but very quickly felt like part of a family (and) grateful to be a piece of this really gorgeous puzzle that is Dune."

"Dune" is set to be released on Oct. 22, simultaneously in theaters and on HBO Max, like all Warner Bros. films in 2021, although Villeneuve hopes that audiences will seek out the theatrical experience, if it's safe to do so.

"It has been dreamed, it has been designed, it has been shot thinking IMAX," Villeneuve said. "It's a physical experience. We tried to design a movie that would be as immersive as possible. For me, the big screen is part of the language."

Whether or not audiences will get on board remains to be seen, but Brolin said a 40-something "Dune'' superfan has already given a vote of confidence.

When the credits started rolling at a screening, there was a brief silence, Brolin said, then, "He started screaming at the top of his lungs and said 'that's what I saw, that's what I saw as a kid!"