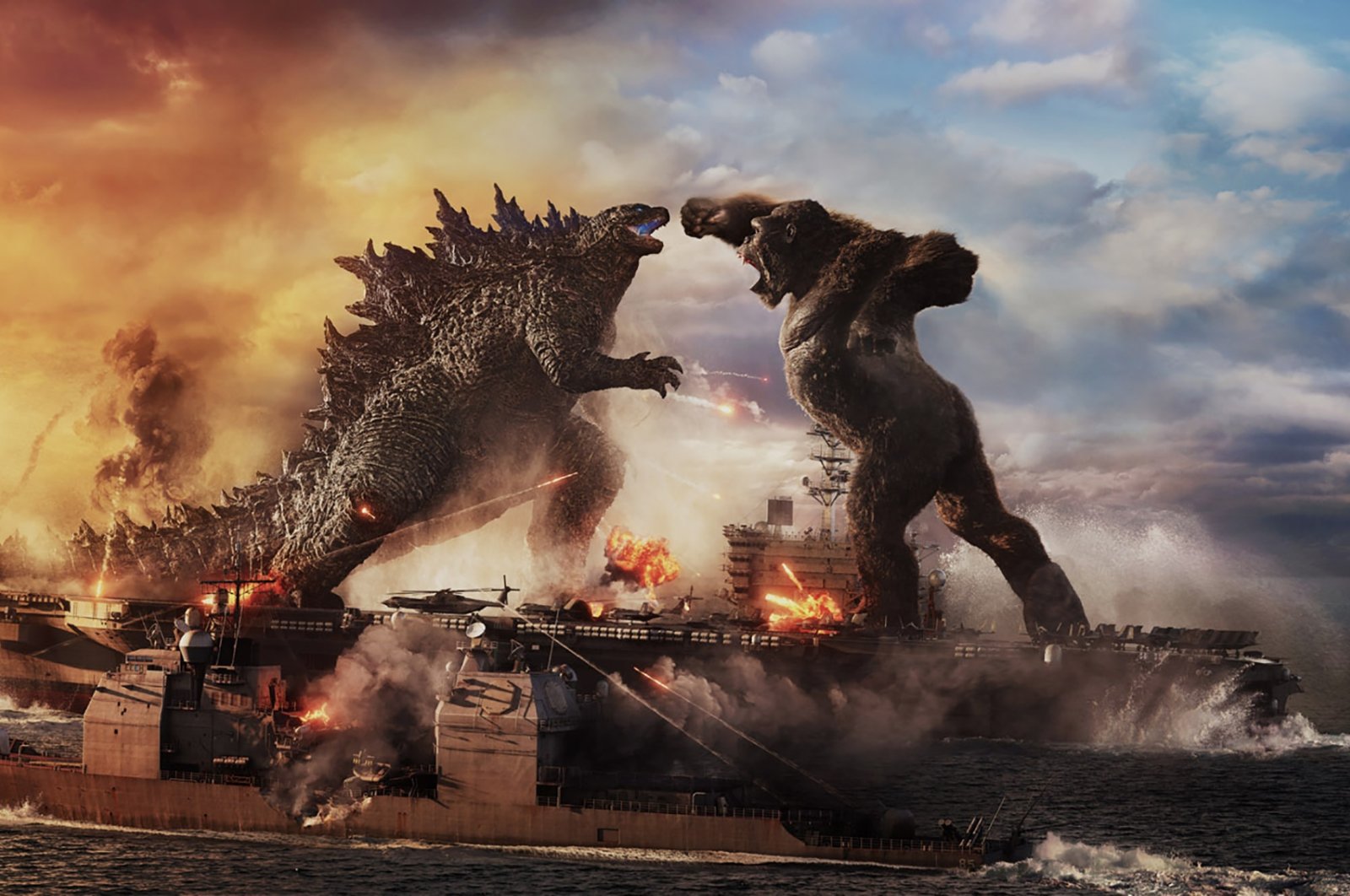 As the entertainment world tries to adapt to the new normal of the COVID-19 pandemic, Hollywood's giant production company Warner Bros. is continuing ahead with its plans to release its entire 2021 slate of movies simultaneously in theaters and on its streaming service HBO Max for one month upon their premiere. As HBO looks to live up to its name, “Home Box Office,” Warner Bros. recently released a new trailer for the 2021 lineup on its official YouTube account.

So, what awaits movie enthusiasts on HBO Max in 2021?

The long-awaited fourth entry in Warner Bros. and Legendary studios' fictional MonsterVerse will finally pit the Earth's mightiest titans against each other, in what promises to be an epic matchup for the fans of the iconic monsters on March 31. Kyle Chandler and Millie Bobby Brown return as the father-daughter duo in "Godzilla vs. Kong," and the cast includes new exciting faces with Alexander Skarsgard, Rebecca Hall and Lance Reddick. However, humans are not what draws the enthusiasts' attention, but rather lots of atomic breaths, stomping and roaring from titular Godzilla and King Kong are what people most want out of this monster flick.

'The Conjuring: The Devil Made Me Do It'

The popular horror series, “The Conjuring,” continues with its third installment “The Devil Made Me Do It” set to be released on June 4. The film, which will be the eighth entry in The Conjuring Universe, will once again feature paranormal investigators Ed and Lorraine Warren, with Patrick Wilson and Vera Farmiga respectively reprising their roles. The movie revolves around a murder case where the suspect claims demonic possession as a defense in court, thus the name. Other returning names include director Michael Chaves and writers David Leslie Johnson-McGoldrick and James Wan, all of whom have previously worked in The Conjuring Universe.

A neo-noir film, “The Little Things” offers a star-studded cast with Denzel Washington playing a deputy sheriff who partners up with Rami Malek's detective character to solve the case of a serial murderer. Jared Leto also stars in the movie playing an eccentric character who becomes the prime suspect in the case.

His performance has already earned him a Golden Globes nomination for “Best Performance by an Actor in a Supporting Role.” The movie is written and directed by John Lee Hancock, and it has been the first release of Warner's 2021 lineup, hitting theaters on Jan. 29.

Yes, it's "Suicide Squad," this time with a “the” at the beginning. Warner's 2016 attempt at this story line was a mixed bag for most viewers, so this is what can be called a “soft reboot.” Most of the original cast is nowhere to be seen and the plot is still unknown, except that it involves a dangerous mission in which the Suicide Squad will travel to South America. The superhero, supervillain and antihero flick is written and directed by James Gunn of Marvel's "Guardians of the Galaxy." Margot Robbie returns to portray her well-received Harley Quinn character once again and other familiar faces include Joel Kinnaman, Jai Courtney and Viola Davis. The giant ensemble cast brings fresh and exciting names as well, including Idris Elba, John Cena, Peter Capaldi, Pete Davidson, Taika Waititi and Nathan Fillion. There is a renewed hype around the movie, as fans of DC Extended Universe want to welcome a fresh start with the film's Aug. 6 release.

One of the most highly anticipated movies of 2021, which was originally set to be released in November 2020, “Dune” will hit theaters and home cinemas on Oct. 1, with a galactic number of stars in its cast. As Oscar-nominated Denis Villeneuve helms the directorial duties, the film is planned as the first part of a two-chapter adaptation of Frank Herbert's original 1965 novel. The epic space opera will follow the audience's darling Timothee Chalamet as he portrays Paul Atreides, the son of a noble house which rules the spice planet of Arrakis, also known as Dune. Atreides must set out on a journey to find his destiny after his family is struck with unfortunate events. The rest of the ensemble cast includes well-known and acclaimed names such as Josh Brolin, Oscar Isaac, Rebecca Ferguson, Stellan Skarsgard, Dave Bautista, Zendaya, Jason Momoa and Javier Bardem.

Iconic film star and critically acclaimed director Clint Eastwood returns once again to the big screen, and the small screen, with a new thrilling neo-Western drama directed by and starring the adorned man himself. “Cry Macho,” based on Nathan Richard Nusbaum's 1975 novel of the same name, focuses on the character of Miko, a one-time rodeo star and horse breeder, as he sets out to return a young boy back to his father. In the story, set in the southern U.S. in 1978, Miko rescues the boy, played by Eduardo Minett, from his alcoholic mother and on their journey finds his own sense of redemption. No release date has yet been announced for the Western flick.

There are several other movies that Warner Bros. has lined up for 2021 to entice viewers with an HBO Max subscription.

“Judas and the Black Messiah” will tell the true-life story of Fred Hampton, the leader of Black Panther Party who was assassinated by the FBI at the age of 21, and Daniel Kaluuya will be portraying Hampton in the movie scheduled for release on Feb. 12.

“The Many Saints of Newark,” the long-awaited prequel to the beloved TV series “Sopranos,” will be released on March 12.

Fans will finally get to see “Mortal Kombat,” a new adaptation of the popular video game franchise of the same name, on April 16.

Based on Lin-Manuel Miranda's hit Broadway musical, “In the Heights” will meet musical fans on June 18 with a story of a man who dreams of a better life, and will involve intricate and massive dance sequences on New York City's streets.

“Space Jam: A New Legacy,” a sequel to the 1996 cult hit “Space Jam” which starred famous NBA legend Michael Jordan, will this time star another famous basketball player, LeBron James, with Bugs Bunny and other Looney Tunes characters, on July 16.

The story of “Malignant” is very much under wraps but we know that it will be an original horror movie with new ideas from director James Wan, who is a veteran of the genre at this point, and it is set to be released on Sept. 10.

The classic cartoon cat and mouse characters will come to life again on Feb. 26 with “Tom & Jerry,” in which Jerry moves to New York City’s finest hotel on the eve of a wedding and the event planner then hires Tom to get rid of him.

“King Richard” is set to premiere on Nov. 19, in which Will Smith will be portraying the real-life Richard Williams, the father and coach of tennis superstars Venus and Serena Williams.

The much-hyped “Matrix” sequel, which we still don't know anything about except that Keanu Reeves will be returning to the franchise, is scheduled for release on Dec. 22.

“Reminiscence,” with no release date yet announced, will star Hugh Jackman as a scientist who discovers a way to relive the past and uses it to rekindle his long-lost love.

Based on Michael Koryta's popular thriller novel of the same name and written and directed by critics' darling Taylor Sheridan, “Those Who Wish Me Dead,” with no release date yet, will include Angelina Jolie, Jon Bernthal and Nicholas Hoult in a dramatic thriller where a teenage murder witness is pursued by twin assassins.