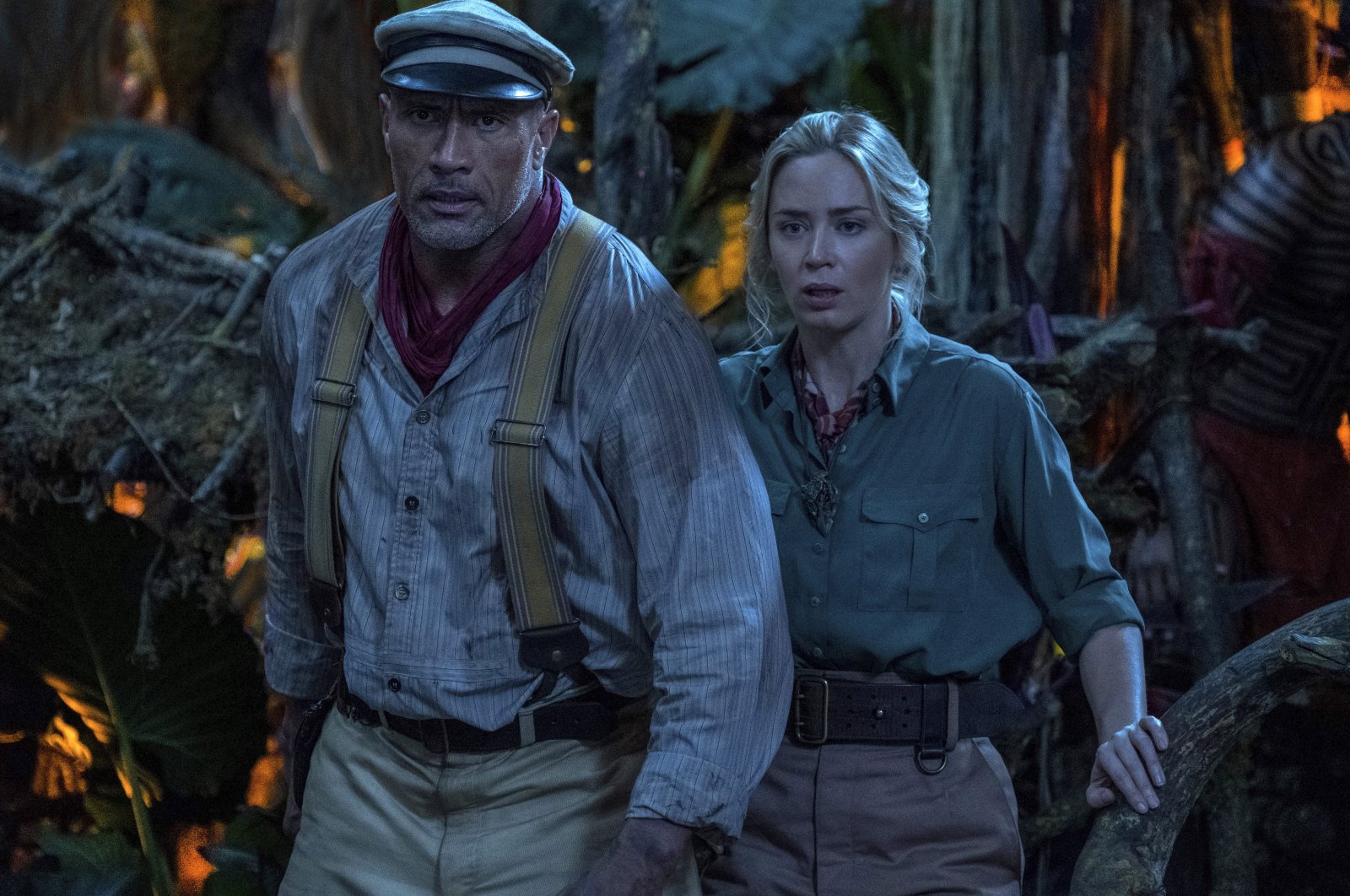 Emily Blunt, right, and Dwayne Johnson in a scene from "Jungle Cruise." (Disney via AP)
by ASSOCIATED PRESS Jul 28, 2021 10:52 am
RECOMMENDED

Emily Blunt and Dwayne Johnson’s new union “Jungle Cruise” remembers very well popular adventure movies like “The Mummy,” “Indiana Jones and the Last Crusade,” “Pirates of the Caribbean” or “The African Queen,” and isn’t about to let you forget them, either.

This is a film whose sole purpose is to remind you of at least a dozen other movies that you remember fondly and coast from there. And it almost gets away with it thanks entirely to its charismatic and entirely game stars Emily Blunt and Dwayne Johnson, who mostly make you forget that you’re watching a movie based on a theme park ride that seems to have been made-to-order at the nostalgia factory. Wearing inspirations on your sleeve isn’t a cinematic crime, but “Jungle Cruise,” directed by Jaume Collet-Serra and written by Glenn Ficarra, John Requa and Michael Green, often does so at its own detriment.

The set-up is forgivably contrived involving Spanish conquistadors, a maniacal German prince (a brilliantly over-the-top Jesse Plemons) and an earnest English woman, Blunt’s Lily Houghton, who have all devoted their lives to finding a mythical cure-all called “Tears of the Moon.” After a truly terrific introduction to Lily involving a solitary heist in a museum’s archives, she and her dandy brother MacGregor (a scene-stealing Jack Whitehall) travel to the Amazon jungle where they enlist a struggling riverboat captain, Frank (Johnson), to lead them down the river in search of this flower.

“Jungle Cruise” is knowingly and enjoyably cartoonish from its production design to its costumes (although some of the CGI animals are distractingly artificial for a production of this size). But it gets bogged down its own overexplained mythology when it could have simply sailed on the simple quest for a magical MacGuffin.

Johnson’s Frank is fun, though. The screenwriters have given him a boatload of cheesy puns as a nod to the theme park ride, and Johnson sells it like he always does. He continues to be very watchable and light, and he and Blunt are clearly having a blast together. Their energy is infectious.

Blunt, meanwhile, is wholly wonderful and operating on another level. She is completely and effortlessly at home as Lily, and it would be delightful to see this character again on the big screen.

But there is also a big problem: "Jungle Cruise” does not work as the romance that it wants to be. Blunt and Johnson have terrific chemistry and banter, just not the romantic kind. It’s more of a platonic buddy cop partnership, which is perfectly fine, but the script tries to force it to be something else, and it just feels false, especially as more and more of the plot hinges on Lily and Frank’s relationship.

Also, despite herculean efforts, Blunt and Johnson can only do so much with a script that too often falls back on milquetoast zingers about Lily’s pants, Frank’s guitar and MacGregor’s material obsessions. There are also some curious choices when it comes to how they frame the sexism and misogyny of the time: Is it believable that a group of male scientists who very recently lived under Queen Victoria would find it laughable to suggest that a woman could lead an Amazonian tribe?

Perhaps my expectations got a little too high over the course of the past year, and all of my summer movies hopes started to rest on “Jungle Cruise.” It is a fine adventure with two genuine movie stars that may very well become a rewatchable staple like the films it references. But on the first watch, it mostly comes across as an earnest and safe homage.