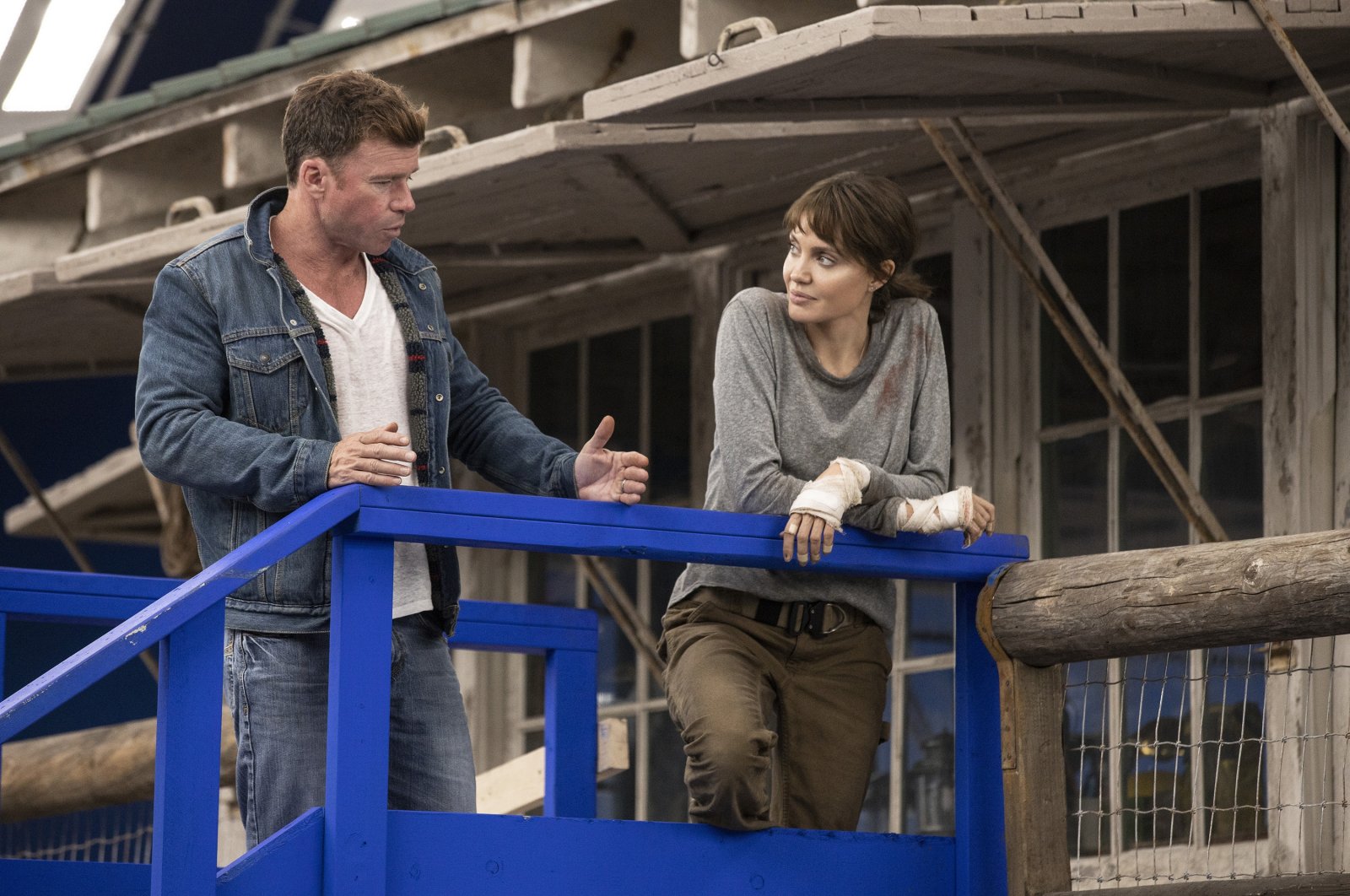 Director Taylor Sheridan (L) talks with Angelina Jolie on the set of "Those Who Wish Me Dead." (Warner Bros. Entertainment via AP)
by Reuters May 17, 2021 2:31 pm
RECOMMENDED

Movie theaters across the world have been slowly reopening from COVID-19 shutdowns, and the film industry at large is struggling to put together decent box office successes with few releases.

Angelina Jolie's survival action thriller "Those Who Wish Me Dead" wasn't very successful for Warner Bros. as the film, which debuted simultaneously on the studio's streaming service HBO Max, took in a paltry $2.8 million at the box office.

The movie's hybrid release on HBO Max likely isn't the reason "Those Who Wish Me Dead" sold hardly any tickets; "Godzilla vs. Kong" and "Mortal Kombat" were both recent Warner Bros. films that were able to generate decent box office revenues despite being released concurrently on a streaming service.

As movie theaters attempt to rebound from the COVID-19 pandemic, family films and CGI spectacles have been popular options to see on the big screen. Gritty dramas geared toward adult audiences haven't been performing as well, and mediocre reviews for "Those Who Wish Me Dead" didn't help drum up interest.

"The film was barely promoted even by pandemic standards and effectively went under the radar as both as a theatrical and streaming release," says Shawn Robbins, the chief analyst at Box Office Pro. "We've seen a number of genre thrillers aimed at audiences of a certain age open during the past year, so there could also be an element of saturation in play."

The film played in 3,188 cinemas, a sizable footprint considering only 65% of movie theaters are currently open, according to Comscore. Taylor Sheridan directed "Those Who Wish Me Dead," based on the novel by Michael Koryta.

The story centers on a teenager who witnesses the murder of his father and goes on the run with a smokejumper (Jolie) to escape two gunmen trying to silence him. Variety's chief film critic Peter Debruge was a fan of the film, writing in his review: "The idea may be outrageous, but Sheridan's commitment makes the whole thing work." Moviegoers gave the film a "B" CinemaScore.

"Those Who Wish Me Dead," which finished the weekend in third place, wasn't the only new movie to open. "Spiral," a creepy addition to the terrifying "Saw" franchise, brought in $8.7 million between Friday and Sunday. That's a mediocre start given its $20 million production budget, but it's enough to easily nab the No. 1 spot on box office charts in the coronavirus era.

Paul Dergarabedian, a senior media analyst with Comscore, says the debut of "Spiral" is "solid" given the slow-to-recover box office. "We are still operating in a very limited marketplace," says Dergarabedian. He's optimistic that things will pick up with releases of Paramount's "A Quiet Place Part II" and Disney's "Cruella" over Memorial Day weekend.

"No," Gleiberman wrote, "the 'Saw' series hasn't really changed. So depending on whether you're a fan or not, eat up...or throw up."

Fans of dismemberment movies ate well this weekend. Zack Snyder's zombie movie "Army of the Dead" also arrived on the big screen, one week before it becomes available on Netflix. Since the streaming service has a contentious relationship with cinema owners, the film only played in 430 locations, far fewer than its fellow new releases.

Netflix, unlike traditional movie studios, doesn't reveal box office data. However, rivals estimate that "Army of the Dead" generated $800,000 over the weekend, enough to crack the top 10.

"Army of the Dead" came in slightly ahead of "Profile," a thriller from Focus Features that follows an undercover British journalist in her quest to expose a terrorist recruiter through social media. Despite playing in 2,033 North American theaters, the movie didn't make much of a dent and brought in just $670,000.

Elsewhere at the domestic box office, a series of holdovers rounded out charts. "Wrath of Man," a heist thriller starring Jason Statham, slid to No. 2 in its second weekend of release, adding $3.7 million from 3,007 theaters. The MGM film has made $14.6 million in North America to date.

At the international box office, where Miramax is distributing the movie, "Wrath of Man" has grossed $41.4 million in total. It opened in Chinese theaters on Monday and made $7.1 million in its first three days of release, as well as another $8.7 million over the weekend, bringing its tally in China to $18.5 million.

Ranking slightly below "Those Who Wish Me Dead," the anime film "Demon Slayer: Mugen Train" and Disney's "Raya and the Last Dragon" landed in fourth and fifth place, respectively.

"Demon Slayer" has become an unexpected hit in the U.S. In its fourth weekend in theaters, the film collected $1.78 million for a domestic haul of $41.9 million. Meanwhile, "Raya and the Last Dragon," which is currently available on Disney Plus for a premium $30 rental fee, pulled in $1.71 million in its 11th weekend of release. That brings its cumulative total to $46 million.