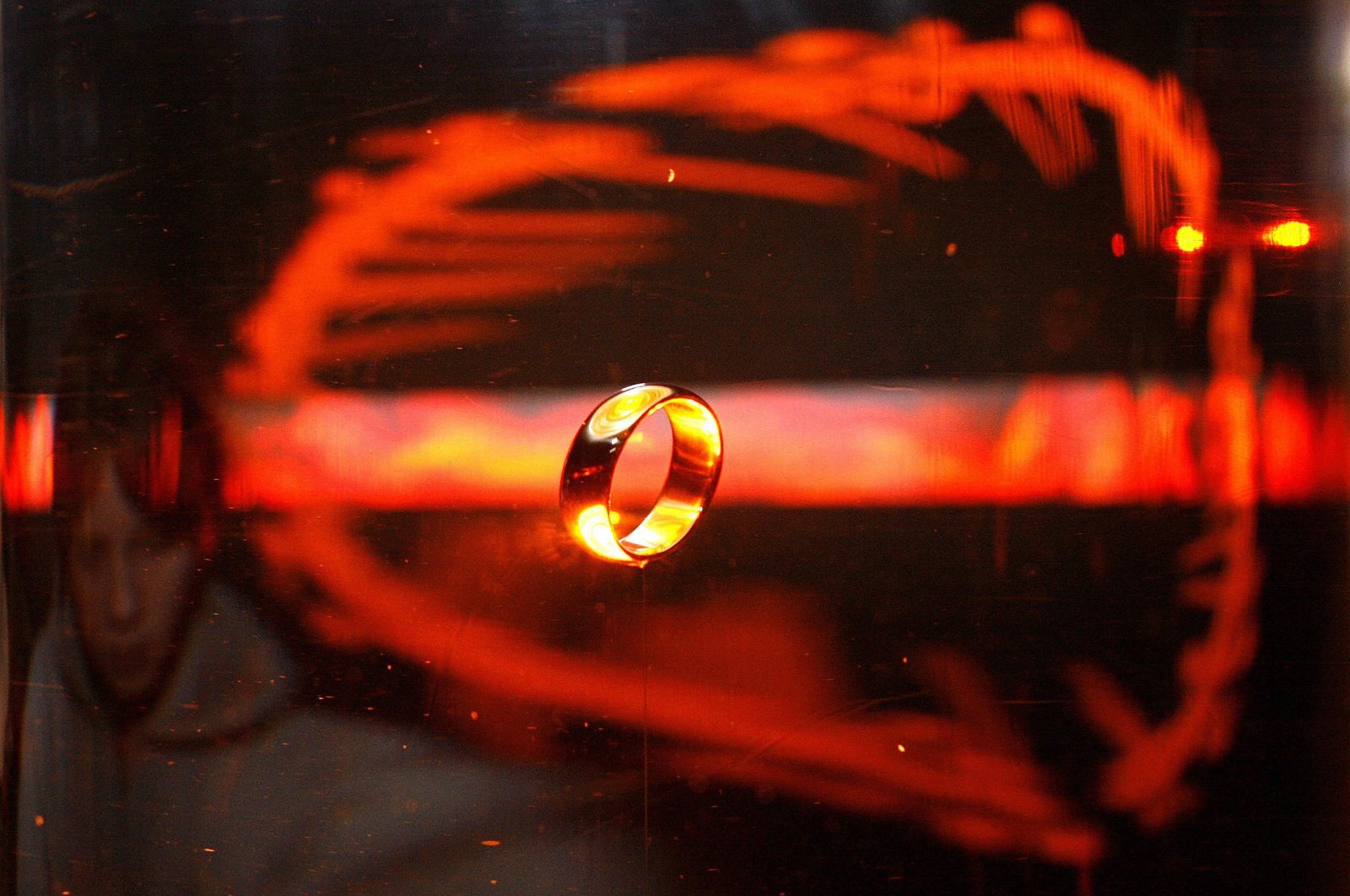 A woman looks at the original ring from the film "The Lord of the Rings" January 30, 2007 at an exhibition in Potsdam, eastern Germany. (MICHAEL URBAN/DDP/AFP via Getty Images)
by Ahmet Koçak Apr 25, 2021 3:55 pm
Edited By Yasemin Nicola Sakay

It has been almost 20 years since the first 'Lord of the Rings' film hit theaters and became a global phenomenon, but before that Tolkien lovers had Ralph Bakshi to thank for a bizarre, unique animated feature. So how do the two compare?

Welcome to Middle Earth! You may encounter trolls, orcs, hobbits and occasionally wizards, but fret not, you are in one of the safest hands of modern literature. If you are, on the other hand, venturing into Hollywood, those hands are not there to guide you and you might chance upon a masterpiece, or wasted potential, or even a waste of time with superhuman elves. There is no guessing which it will be, really.

We have had the pleasure, or rather the luxury considering the resistant hand of the marvelous late Christopher Tolkien and the Tolkien Estate, of enjoying a couple of adaptations of John Ronald Reuel Tolkien's excellent works over the years, decades, with strikingly diverse styles in form of animations, cartoons, video games and of course, films. We never had seen a television iteration but thanks to Amazon, that is around the corner as well.

If it were any other intellectual property, we would have forgotten the low points years ago, or at least I sure would, but not the versions of Middle Earth. A mysterious condition that means I can't forget, nor can I hate, the ones that fail miserably to recreate the aura of Tolkien, as if even the broken pieces of this world are enough to enchant one, like that of ruins of ancient civilizations, broken but hinting at greatness. So, let's take a look at two adaptations of “The Lord of the Rings” books.

J.R.R. Tolkien, born on Jan. 3, 1892, in South Africa, was always interested in swords and shields, fairies and languages. He could read and write fluently by the age of 4. Tolkien's life, particularly the younger stages, was marred by losses. He lost his father at the age of 3 to rheumatic fever, and his mother when he was 12 to acute diabetes. His guardian from then on was Father Francis Xavier Morgan.

During his early teens, his interest in fairies and invented languages was cemented after his cousins introduced him to the idea with their little language. He was fascinated by the concept and before long was constructing his own languages. Around the same time, at the age of 16, he met 19-year-old Edith Mary Bratt, an orphan like him. Soon afterward, they were in love but couldn't be together yet.

Father Morgan had prohibited Tolkien from meeting or corresponding with Edith until he was 21, with the main reason being him flanking his exams, and the other being that Edith was a Protestant whereas he and Father Morgan were Catholic. Tolkien obeyed his guardian and refrained from contacting Edith. On the evening of his 21st birthday, he wrote a letter to her, declaring that he had never stopped loving her. In January 1913, the two got engaged.

Then, the Great War erupted. Tolkien was deployed mainly in France and survived the Battle of Somme while Edith was back at home, waiting anxiously. After a horrible and terrifying while on the front lines, Tolkien was deemed medically unfit for general service. So, as he lay in bed in the hospital, he began creating “The Book of Lost Tales,” one of the first in his attempts at creating a mythology for England through Middle Earth.

After the war, he returned to teaching, which is where he would pen "The Hobbit." Tolkien's now-famous anecdote goes: He was grading papers as part of his duties as a lecturer, but he got bored on one. So, he turned the paper over and scribbled on the back: “In a hole in the ground, there lived a hobbit.” He had no idea what a hobbit was, yet.

He finished the book, his modern fairy tale if you will, and was asked by his publisher for a sequel. Meanwhile, his “Silmarillion,” which delves much deeper into the history of mythology, and his other works were all rejected. So, he started working on the sequel, and it took him nigh on 20 years to finish “The Lord of the Rings,” with 15 spent writing it and five spent perfecting it.

The books were a huge success both in the United Kingdom and abroad, and although it arrived late in the United States, it was simply phenomenal in terms of sales. Tolkien was very careful with his decisions on adaptations, and there were none in his lifetime. Five years after the 81-year-old Tolkien passed away, Ralph Bakshi helmed an animated work with such unique techniques that it was a masterpiece in its own rights.

The cartoon deployed rotoscoping, a method that animators use to trace over motion picture footage, frame by frame, to produce realistic action. Combined with the red skies, it was such a sight to behold. Of course, being animation, it had its runtime issues, coming in at 133 minutes, much longer than the usual of that time. The animation, having limited time, also was a condensed adaptation of both the first and second books.

However, the things that Bakshi achieved in that little time were incredible. The movements of the characters were so unique, unnerving at times. The determination to rotoscope the characters, by hand, laboring day and night, with a voice cast that included John Hurt giving the exiled king Aragorn a magnificent aura.

Frodo was much better handled by Bakshi. In Peter Jackson's trilogy, Frodo does not display much agency in his decision-making, and he doesn't show his brave side or the fighter side. In Bakshi's crazy fever dream Frodo fights with Black Riders instead of just dropping his sword, attacks even balrogs shouting “For shire.”

There were plenty of things to hate as well. For a start, Samwise Gamgee was sacrificed mercilessly and demoted to a role of comic relief. Unfortunately, he wasn't very comical at that either.

However, apart from all that, the most challenging, offensive part of Bakshi’s work was that it was unfinished. Bakshi directed only one animated feature that covered the first two books, with the climax of the film leaving viewers in anticipation for a sequel, to cover the third and final chapter. It never came. Two years later another team finished the story in animated form but Bakshi was not attached, the style was different, the actors were different, and well, everything was different.

Nearly 20 years later, Peter Jackson sat down in a room with studio executives as he pitched them the idea of a two-part "Lord of the Rings" after he was rejected by many others. The studio rejected the idea outright, stating they could only greenlight the idea if it would be a trilogy of films like the books. The rest, as you know, is history.

Jackson delivered an epic saga, the entirety of which if watched in extended cuts would take 12 hours to finish. It swept the Oscars, breaking records. It was seen by billions. However, the films in some aspects were the complete opposites of the scenes in books. They took a couple of liberties with their choices. These differences, while they do not disappoint, make one wonder.

Viggo Mortensen portrays Aragorn beautifully, but not kingly, not like Hurt. Viggo's Aragorn feels right when he is on a horse, not when he needs to use archaic speech. Then there is Denethor played like a complete madman, who should have been wise and smart. Meanwhile, the elves get involved throughout the film, unlike in the books. The books make one thing explicitly clear, it is not a story of elves but men. Elves are leaving these lands, and how men will solve the problems they face is the core question of the books. In Jackson's iteration, the elves not only hang around but also provide an army in the battle of Helm's Deep.

These differences to the books add up together with various others to make the Jackson trilogy a very hard-to-decide situation. Tolkien had seen war, he lost all but one of his closest friends in the war. He was not an author to glorify, extend battle sequences. Jackson is one of the best directors at capturing epic-scale confrontations. So, one can see the two clashing miles away, and Jackson's Samwise is the heart of the story.

However, apart from some issues in its heart, Jackson manages to capture the themes of Tolkien successfully. The corruption of power is an ongoing theme in Middle Earth, and Jackson finely relates it, along with the sense of journey and adventure. He delivers the “even the smallest can make a change” theme beautifully, a theme that carries even greater importance at a time when small gestures, like wearing a mask, can make a difference.