Earring gifted by Byzantine emperor to a Viking found in Denmark 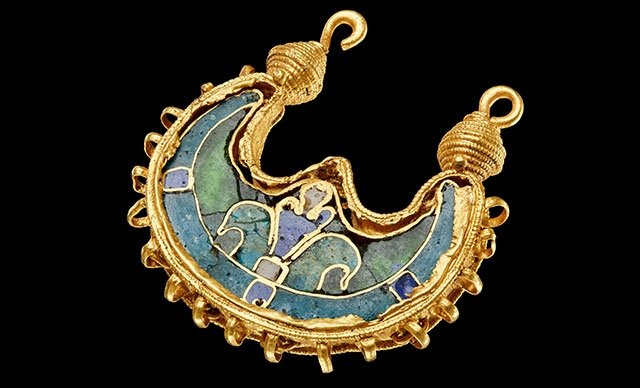 Researchers have found a golden earring that is presumably from the Middle East and dates back to the 11th century in Denmark, according to an announcement by the National Museum of Denmark.

The piece of jewelry was discovered by Frants Fugl Vestergaard, with the help of a metal detector, in a field in West Jutland.

It is the first discovery of such an object in Scandinavia, the Copenhagen museum said in a statement.

"It is completely unique for us," said museum expert Peter Pentz. "We know of only 10 to 12 other specimens worldwide and we have never found one in Scandinavia."

The Vikings brought back thousands of silver coins from their forays, travels and trading expeditions, but hardly any jewelry, Pentz said.

He expressed surprise at the discovery site, as there was no known Viking site nearby. Gold from the Byzantine Empire was previously found as burial objects in Viking graves.

The earring consists of a crescent-shaped gold plate inlaid with enamel in a frame of gold threads decorated with small gold balls and gold bands. The motif is two stylized birds around a plant symbolizing the tree of life.