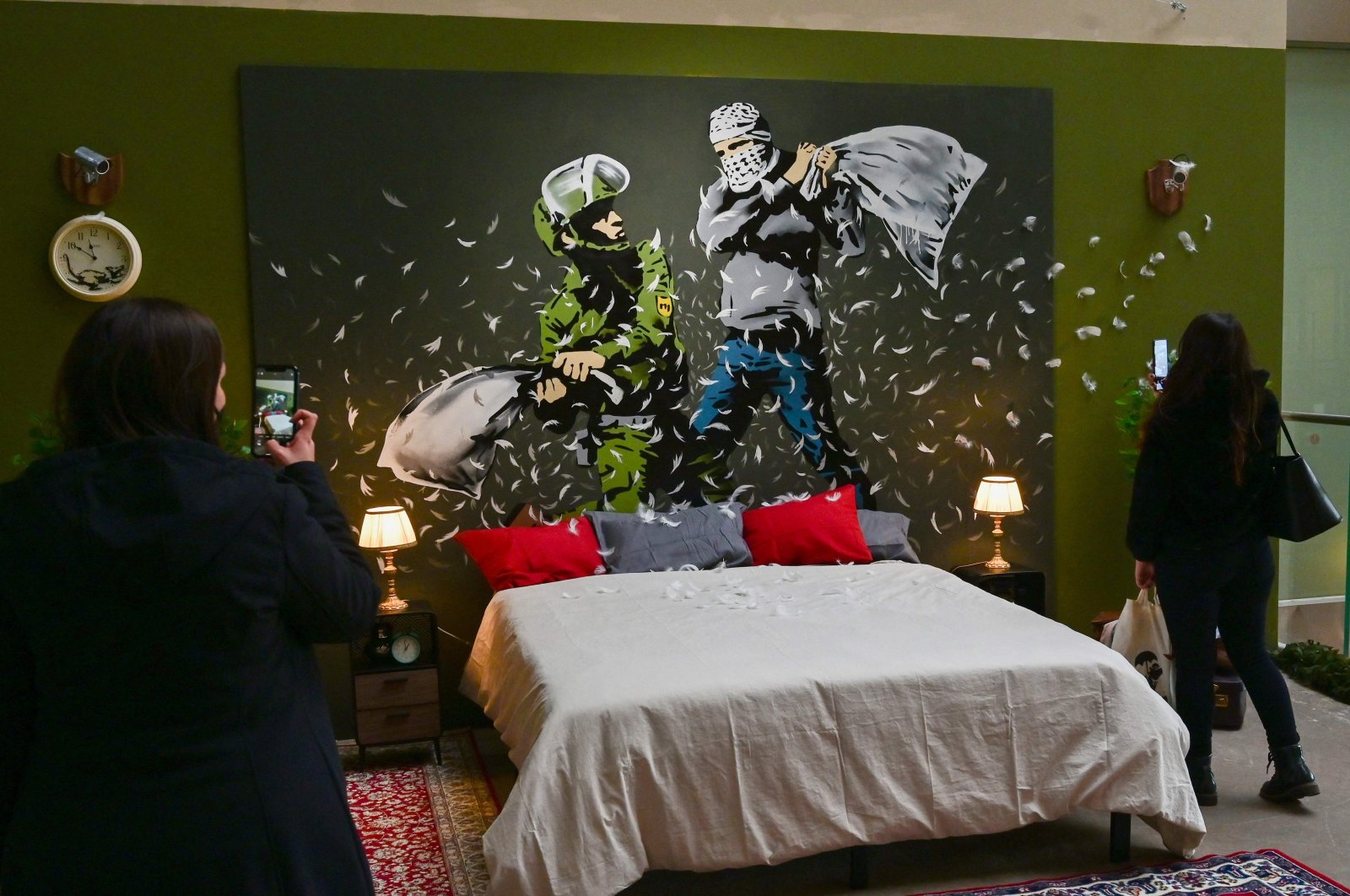 Visitors view British street artist Banksy's mural "Pillow Fight" during a preview of the exhibition “The Word of Banksy – The Immersive Experience" at the Milano Centrale main railway station in Milan on December 02, 2021. (AFP)
by French Press Agency - AFP Dec 03, 2021 10:51 am
RECOMMENDED

Commuters and passengers will be able to take a short break from the hustle and bustle in Milano Centrale main railway station with a fascinating exhibition comprised of reproductions of British street artist Banksy’s provocative works.

The elusive artist's murals these days exchange hands for millions, notably the famous "Girl with Balloon" which was sensationally shredded and sold under a new name, "Love is in the Bin," for a record £18.8 million ($25.4 million) in October. But the aim of “The Word of Banksy – The Immersive Experience,” opened Friday in the Mosaics Gallery on the rail level of Milan’s monumental central station, is to make works by Banksy – whose identity is said to be known only to a handful of friends – again accessible to a wide audience.

"Most of his works have been destroyed, covered up, stolen, sold, so they are no longer directly visible to the public," the curator of the exhibition, Manu De Ros, told Agence France-Presse (AFP).

More than 130 murals and silkscreens are on show in the train station until February 27, set on backgrounds created by young graffiti artists and students that hark back to their original surroundings.

"We have reproduced the walls on which Banksy painted, the bricks, concrete, the dirt of the roads, the pollution," De Ros said.

The exhibition is ticket-only and in a closed off area, but some noise from the train station filters through, giving visitors a sense of the streets on which the works first appeared.

There are reproductions of classic works like "Flower Thrower," showing a masked protester hurling a bunch of flowers that first appeared on a wall in Jerusalem, as well as more recent pieces.

There is "Aachoo," a sneezing lady who appeared at the start of the coronavirus pandemic, or another on the wall of a former British jail that once held playwright Oscar Wilde, depicting a prisoner escaping with a typewriter.

De Ros said he hoped it would cause some of the thousands of people who pass through the station each day to stop and think.

And what does the artist think?

"Banksy never directly authorizes exhibitions that he doesn't organize himself, that's a rule, but neither does he prohibit them. He doesn't stop us," the curator said.

"This allows us to believe, perhaps a little presumptuously, that the work we do is appreciated. This also allows Banksy to spread his message even more widely."