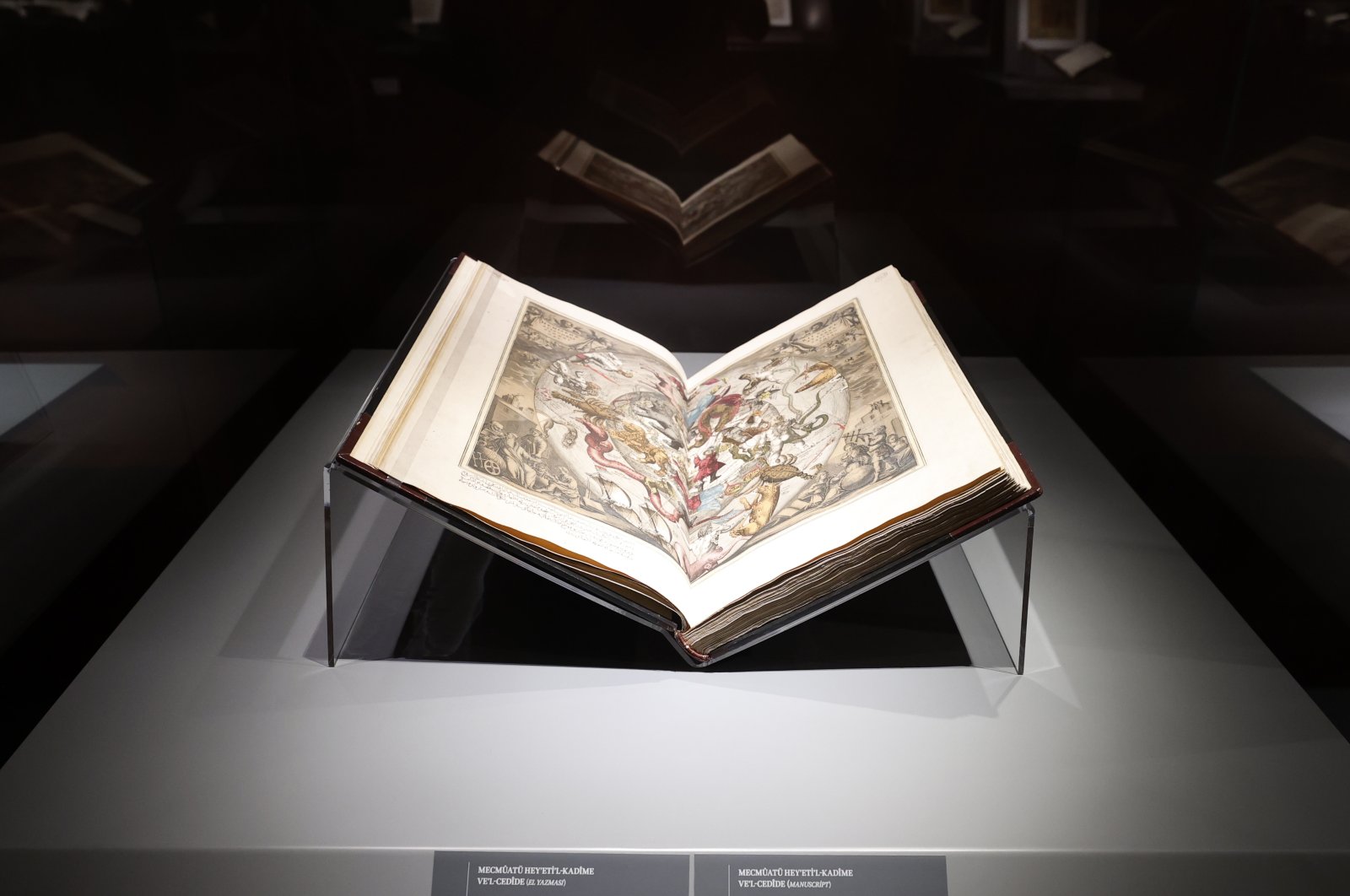 A book on display at the “Foreword to the Printing House: Basmacı Ibrahim Efendi Müteferrika” exhibition, at the Presidential Library, Ankara, Turkey, Nov. 9, 2021. (AA Photo)
by DAILY SABAH WITH AA Nov 10, 2021 1:39 pm
RECOMMENDED

The “Foreword to the Printing House: Basmacı Ibrahim Efendi Müteferrika” exhibition, which opened on Sept. 7 at the Presidential Library, has hosted more than 50,000 visitors in the Turkish capital Ankara to date. The exhibition features works that reflect the story of Müteferrika Printing House, which went down in history as the first-ever Turkish printing house.

The first printing press that belonged to the Muslims was opened by Ibrahim Müteferrika in 1727 during the Tulip Period, when the Ottoman industrial revolution began. Said Efendi, who was the son of Ottoman statesman Yirmisekiz Çelebi Mehmed Efendi, accompanied his father during his visit to Paris as his stenographer and admired the printing houses in Paris. In the following period, he assigned Ibrahim Müteferrika to build a similar one in Ottoman lands.

Ibrahim Müteferrika submitted a report to the grand vizier, in which he said that many Islamic books were lost during the destruction that Andalusia and other Muslim lands suffered from, and added that there were not enough calligraphists to copy large and comprehensive books faultlessly, thus emphasizing the necessity and benefits of the printing press. He said knowledge could spread farthest via the printing press, which produced more access to printed information. He also argued that it created profitable jobs and the prices of books would decrease. He pointed out that books printed by Europeans in the Arabic alphabet had many mistakes and the printing press would boost the Ottoman Empire's reputation.

The then-Sheikh al-Islam gave a fatwa, saying that the printing press was not contrary to religion and agreeing that it was a useful invention. Ottoman Sultan Ahmed III issued a royal decree in 1727 that allowed the publication of nonreligious books as well. Said Efendi and Ibrahim Müteferrika founded a labor-capital company and opened the first printing house in Ibrahim Müteferrika's mansion in the Üsküdar district of Istanbul.

The exhibition at the Presidential Library reflects the journey of Müteferrika Printing House, which published the first book in 1729, through works written and translated by Ibrahim Müteferrika, the lead printing letters used in the printing house, archival documents revealing the establishment process of the Ottoman printing house and its founding staff. The show also features 17 important books, consisting of 22 volumes, published in the Müteferrika Printing House and kept in different libraries and archives of Turkey.

The show, open until Dec. 30, unveils the task that the Müteferrika Printing House took on in the history of science as the first printing press operated by a Muslim in the Islamic world.

Presidential Library Exhibition Manager Talha Turhal told Anadolu Agency (AA) that the exhibition has been visited by more than 50,000 people. “Among the visitors, we have young students as well as adults.”

Pointing out that Ibrahim Müteferrika was a Hungarian-born statesman, Turhal said, "Important people like state dignitaries and important state members from other countries have also visited the exhibition. For example, Hungarian Prime Minister Victor Orban, who will come to Turkey in the near future, will be visiting the library and the exhibition.”