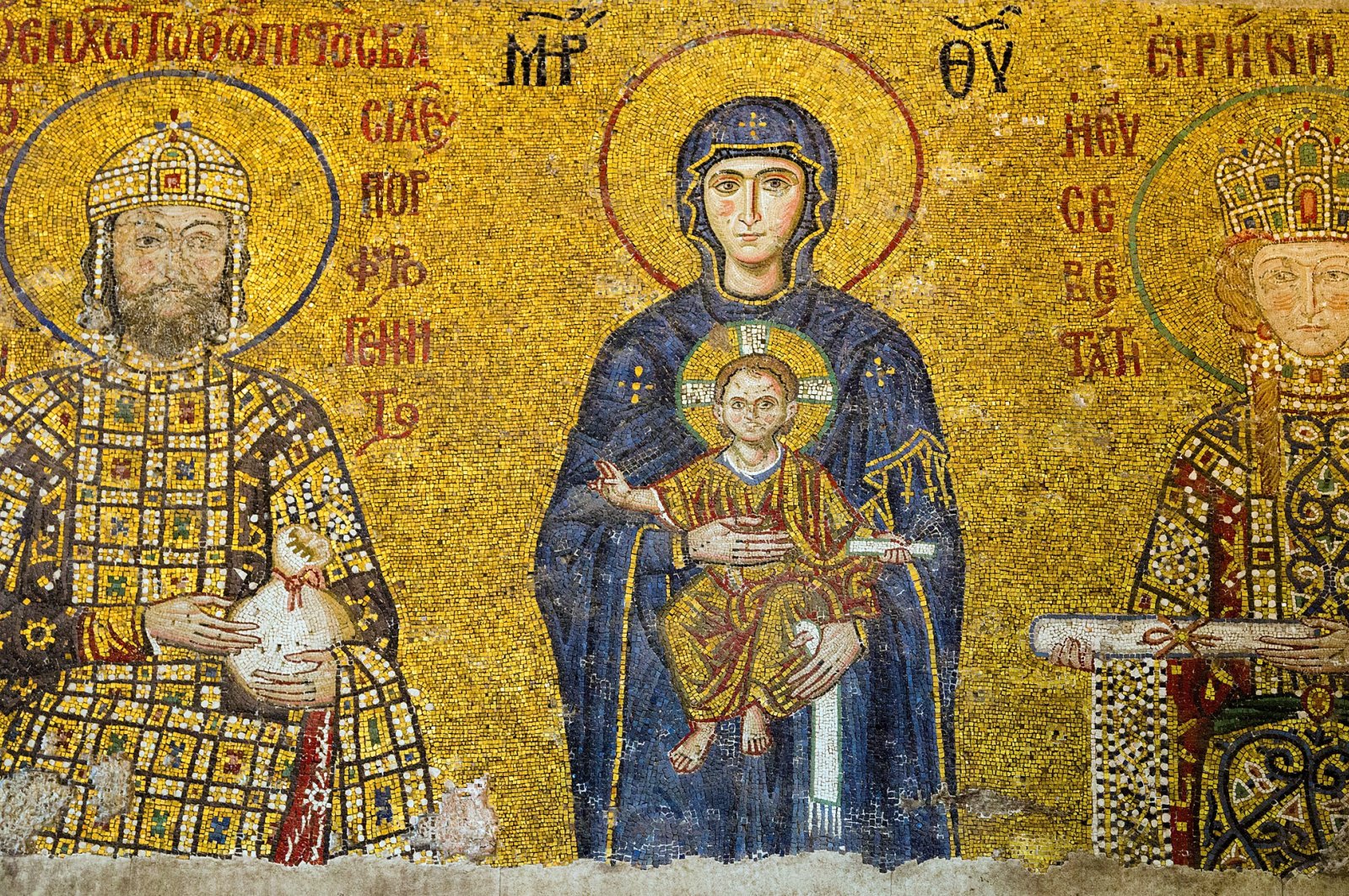 The hotly anticipated question of recent weeks has been how the Hagia Sophia mosaics will be covered. However, research suggests the current mosaics may not even be the originals and were instead made later on

The removal of the museum status of Hagia Sophia and its reversion to a mosque have created quite a stir all around the world. Various reactions came from abroad, spearheaded by the United Nations Educational Scientific and Cultural Organization (UNESCO). Underlining the universal cultural heritage of the structure, officials expressed concerns about this change.

They said that states should ensure that no changes are made to sites on the heritage list within their borders that would harm the universal values of those sites. According to the statement, the changes must be reported to UNESCO by the relevant state in advance. If necessary, they may also be reviewed by the World Heritage Committee.

UNESCO officials stated that they expressed their concerns about the issue several times by writing letters to Turkey. They called on the Turkish authorities to conduct a dialogue before making a decision that could harm the universal value of this space. Various baseless articles were shared on social media that the historical texture of the building would be damaged.

The status of Hagia Sophia and the practices to be made relating to it are Turkey’s domestic issues, as both President Recep Tayyip Erdoğan and Foreign Minister Mevlüt Çavuşoğlu have voiced.

Though politicized, the issue of the reversion of Hagia Sophia into a mosque is actually all about respecting a legal decision. In other words, Turkey did not make a political decision that was in violation of its own laws.

Hagia Sophia belonged to the Eastern Roman Empire. When Istanbul was conquered, all the securities and real estate owned by this state were transferred to the Ottoman treasury as a result of the war law of that period. One-fifth of the loot obtained belongs to the state, according to the Islamic law governing war, applied by the Ottoman state. One-fifth of these state-owned properties also become the personal wealth of the sultan.

The sultan has the right to choose whatever he desires from the loot. Sultan Mehmed II, aka Mehmed the Conqueror, acquired Hagia Sophia, which belonged to the emperor before the conquest, and converted it into a mosque. When he entered the building, he performed the first prayer and read the khutbah – the address delivered in the mosque on Fridays and during annual rituals – himself during the first Friday prayer. The prayer was led by Akshamsaddin, an influential Ottoman religious scholar, poet and tutor and adviser to Sultan Mehmed II.

Sultan Mehmed II did not keep this place as his own mosque but donated it as a foundation for all Muslims to use. He founded the “Abu'l Feth Sultan Mehmed Han Foundation” with a number of works, especially Hagia Sophia. He prepared a deed called "vakfiye" for this foundation.

In 1934, the Council of Ministers turned Hagia Sophia into a museum, going against the foundation law. However, the Abu'l Feth Sultan Mehmed Han Foundation was also stated in the official land registry of Hagia Sophia. Turkish courts ensured that this decision was lawful. Thus, it was made necessary to respect private property in accordance with international law. Besides, this liberated the structure from the curse written by Sultan Mehmed II in the foundation deed.

After the conquest of Istanbul, Sultan Mehmed II ordered that the building be prepared for the first Friday prayer. To this end, religious items belonging to Christianity were removed. The sultan did not allow the cutting and removal of ornaments and mosaics. However, since having them visible would prevent worship, he ordered them to be covered with a thin layer of lime.

Ottoman historians, such as Solakzade Mehmed, recorded that the faces of pictures were scratched after the conquest. Some foreign travelers wrote that frescoes were exposed in the 16th, 17th and 18th centuries. The most noteworthy restoration of Hagia Sophia was made by Swiss architect Gaspare Fossati upon the order of Sultan Abdülmecid. It can be seen from the picture drawn by Louis Haghe, a Belgian lithographer and watercolorist, that only the faces in the frescoes were covered after this restoration and other decorations were left uncovered.

When the building was converted to a museum, it was decided that the Hagia Sophia's minarets should be demolished. As a matter of fact, the minaret of the mosque known as the Little Hagia Sophia was blown up with dynamite. Ibrahim Hakkı Konyalı, the museum director and historian of art, prevented this destruction by saying that the building would be damaged, in a report he prepared. Konyalı said, “While Sultan Abdülmecid II had it repaired, the shape of the Christian mosaics in the open was distorted by putting another branch of the same color with oil paint on them.”

"Since the building is used as a mosque, it is not possible to leave figured depictions exposed,” said Sabine Schlüter, who researched the restoration of Fossati.

It is known that many mosaics fell off in the great Istanbul earthquake of 1894. From all these narrations, it is understood that those in the interior of the building were scratched, while the ones in the outer galleries were covered.

The mosaics in Hagia Sophia emerged with the work of the Institute of Byzantine Studies founded by Thomas Whittemore, an American from Boston. Whittemore studied English literature at Tufts University and continued his education on art history at Harvard. He also taught English literature.

Interested in Byzantine art, Whittemore later participated in archaeological excavations in Egypt and Bulgaria. However, he was considered an amateur-level archaeologist.

During the period when the world economy was experiencing the 1929 financial crisis, Whittemore collected money from rich Americans to save Byzantine works in Istanbul. His fundraising activities were a great success and helped him establish the Byzantine Institute, which also won Ankara's approval.

In an article written by the head of the institute in 1950, it is said that the permission to preserve the works in Hagia Sophia was obtained in 1931 thanks to then-U.S. Ambassador to Ankara Joseph C. Grew.

Hagia Sophia was first taken under the police cordon. Work continued for two years inside the building, which only Whittemore and his team could enter.

When the mosque was closed, special embroidered historical carpets were cut and distributed. Candlesticks were taken to the foundry to be melted. Calligraphy plates, which were very large, were fortunately taken to the warehouse without any damage. With Turkey’s transition to multi-party democracy, these plates were hung again thanks to then-Prime Minister Adnan Menderes.

In addition to the mosque, the Hagia Sophia Madrassa, built by Sultan Mehmed II as the first university of the Ottomans in Istanbul, was unfortunately destroyed.

Those who know the previous state of the mosaics suggest that the current mosaics were later built by the institute. Again, the execution of the works in secrecy is the main source of these rumors.

With today's advanced technological facilities, it is possible to trace the origins and age of these mosaics. If the extent of the influence of Whittemore and the institute team on the existing mosaics is investigated, these rumors can be answered.

In Islam, it is considered haram to worship in the presence of a portrait. No concessions have been made to this stance against sculptures and paintings since the advent of Islam. For this reason, the Presidency of Religious Affairs announced that the mosaic paintings would either be veiled or the lights around the mosaics would be dimmed during prayer times. The technique will be determined from the first Friday prayer on July 24. Individual prayers will be performed in areas where there are no images.

Also, the building will always be open to tourists. While the museum closed at 5 p.m., Hagia Sophia will remain open to tourists until the time of the night prayer, just like in other historical mosques.