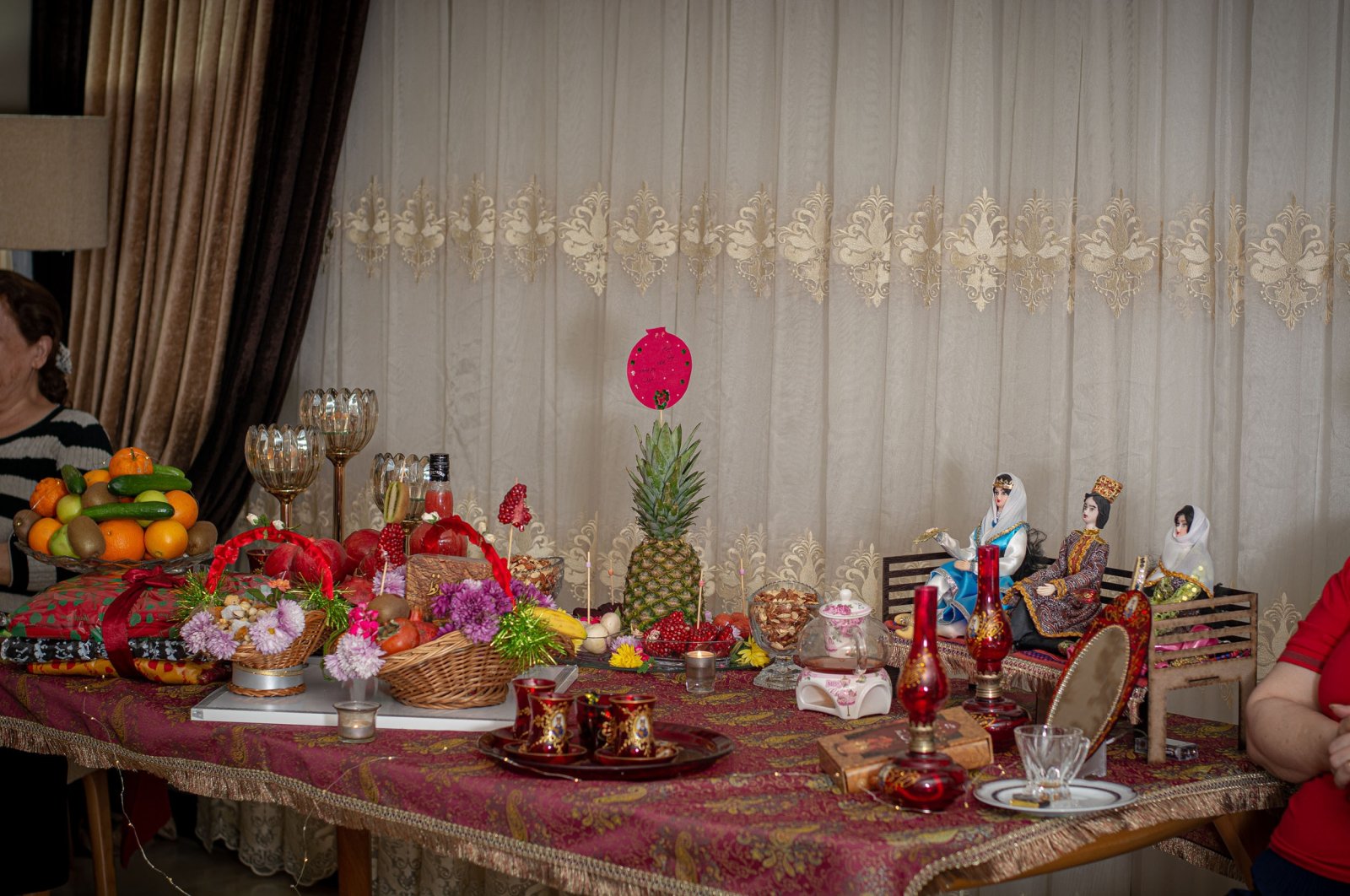 A Yalda Night table is prepared with gifts and fruits including pomegranate, watermelon, cakes and pastries, in line with a book by Hafez. (Shutterstock)
by Anadolu Agency Dec 20, 2021 4:51 pm
RECOMMENDED

The longest nights of the year, corresponding to December, had a celebratory culture in Iranian culture. The winter solstice festival Shab-e Yalda (Yalda Night) brings together members of Iranian families, like the Goodarzis, every year for night-long festivities marked by poetry, music and fruits.

They gather around "korsi,” a heated low table, which is neatly bedecked with fresh and dried fruits, sweets, candles, flowers and a poetry book of 14th-century Persian poet Hafez Shirazi, also known as Hafez.

The eldest member of the family recites poems from "Diwan e Hafez" ("Diwan of Hafez") – diwan is a collection of poems by a poet – with a Sufi tune in the background, creating a spiritual ambiance.

Fruits are an essential part of Yalda festivities. Pomegranates occupy the most important place on the table – symbolizing rebirth and revival. Melons and other fruits signify fertility, light and goodness.

The "longest night of the year," for Iranian families, is also the most special, spent in family reunions and quiet celebrations until the break of dawn.

"I associate Yalda Night with vibrant hues of red, with the fragrance of pomegranates and melons, with the soulful poetry of Hafez, with family reunions, with everything good and blissful in life," said Sahar Goodarzi, a university student from Tehran.

"It's an integral and fascinating part of the centuries-old Persian culture and heritage, older than many other festivals across the world," she told Anadolu Agency (AA).

The ancient fiesta is widely celebrated in Iran, and even by Iranians living overseas. It is also popular in neighboring countries like Afghanistan, Tajikistan and Azerbaijan.

Shab-e Yalda, which translates into "night of birth” in the ancient language of Syriac and falls between Dec. 21 and 22, dates back to the pre-Islamic period when the majority of Iranians followed Zoroastrianism.

The festival marks the end of autumn and the beginning of winter. It is also considered the "longest and darkest night of the year" in the Northern Hemisphere.

"After Nevruz (called Nowruz in Persian), the Iranian New Year, Yalda Night, also referred to as Chelleh, has to be the most important and the most anticipated event of the year for Iranians," said Sareh Atoofy.

Atoofy's family, who live on the outskirts of Tehran, has maintained the ritual of decorating the Yalda table and making elaborate preparations for celebrations that continue until after midnight.

"There is a sense of palpable excitement attached to Yalda Night celebrations, which hasn't changed all these years," she told (AA). "This year's table is already decked up."

For Alireza Hashemi, the favorite part of Yalda festivities is a practice known as "Fal e Hafez” where a person instinctively opens Hafez's poetry book and reads out the last verse of the poem on that page, which is believed to convey what destiny has in store for that person, at least that year.

"I do it every year on Yalda Night, and I think everyone (in Iran) does," Hashemi told AA. "Call it what you may but it mostly is spot on, absolutely accurate and precise."

Iran has in recent years made strenuous efforts to register the Yalda festival on the UNESCO Intangible Cultural Heritage List, which seeks protection of important intangible cultural heritages worldwide.

It submitted its first proposal to the United Nations cultural body in March 2015. The proposal stated that the Yalda is known as "one of the most ancient national festivals of the country” and that "public sympathy and love provide this ritualistic festival with one of its defining features.”

Among the features of the festival listed on the proposal include "the outstanding presence of the color red” – red pomegranates, red watermelons, red grape products, etc., which it stated, "constitute inseparable parts of the ceremonies.”

AA learned that the matter is likely to be discussed during the meeting of the UNESCO world heritage committee slated for mid-June in Russia.

According to officials at the agriculture ministry, a total of 3.18 million tons of watermelon were harvested from 83,937 hectares in the current year, with 166,000 tons only since the onset of autumn to meet the high demand in the run up to Yalda Night.

The festival has been a low-key affair in the past two years since the outbreak of the coronavirus pandemic, with authorities urging people not to hold any public events on the occasion.

The identification of the first case of the omicron variant in Iran, two days before the Yalda festival, is likely to dampen the festive spirit further, fears Ramin Khoshlessan.

"Yes, it is likely to weigh on one’s mind, as the battle against the pandemic is far from over,” he told AA. "But it should be fine as long as people adhere to health protocols,” he said.