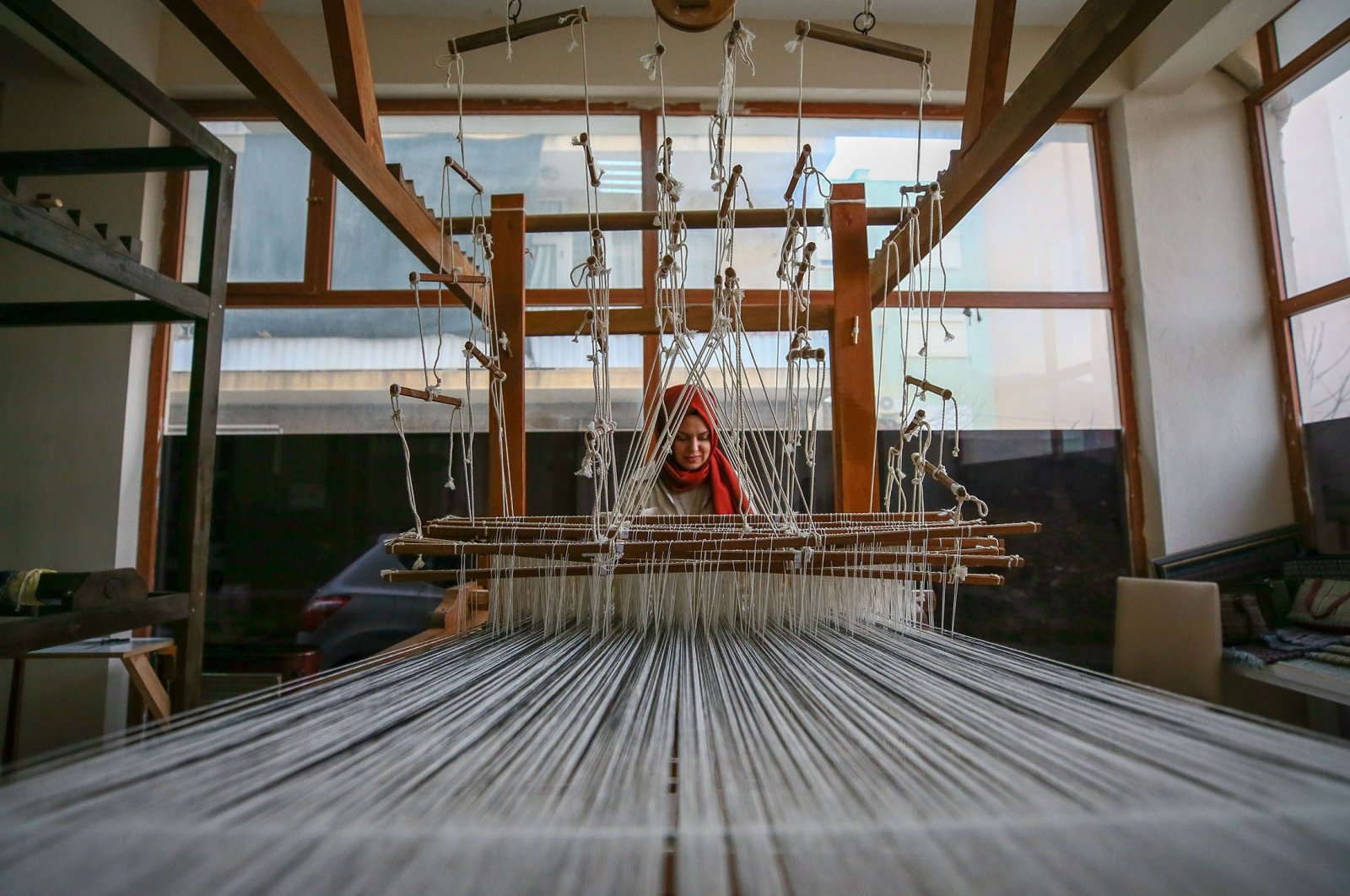 A craftsperson in the Tire district of Turkey's Izmir is working hard to keep alive a 500-year-old traditional method of weaving known as “Tire Beledi Weaving,” making sure that the method that once adorned the kaftans (robe or tunic) of Ottoman sultans is passed on to future generations through her workshop.

Nurefşan Yaykal, the granddaughter of 88-year-old Saim Bayri, one of the last masters of the Beledi weaving craft, has been trying to keep a historical piece of the town's culture alive for the last three years.

The technique, which dates back to the 16th century, has been considered to be the ancestor of the English weaving technique known as jacquard, and differs from other techniques due to its double-sided weaving.

According to the 1908-dated Aydın Vilayet (province) Salname – annals in the Ottoman Empire – while there were 60 handlooms in the district employing the traditional method, the number of both masters and looms decreased rapidly due to the development of technology and the technique's learning curve, as it is more difficult than other types of weaving.

As a result of the initiatives of the municipality and the chamber of commerce in Tire, the historical method was registered last year by the Turkish Patent and Trademark Office (TÜRKPATENT) under the name “Tire Beledi Weaving.”

Beledi weaving requires 24 frames on 13 pedal-controlled looms. The weaving that emerges on these looms has a reputation for being very durable.

Yaykal, who opened a workshop with the support of Small and Medium Industry Development Organization (KOSGEB) three years ago, has been designing products such as jackets, bags, ties and prayer rugs with the technique on the loom, which she uses like a musical instrument.

Yaykal, who also gives courses to women who want to learn the technique, works with textile academics to make the historical type of weaving popular worldwide.

Yaykal said that the Beledi weaving was unique from other weaving methods because it was double-sided. She noted that there were 13 legs on the loom and that it offered several pattern options.

She explained that she was the fifth generation representative of the craft her grandfather worked hard to protect, and that she was determined to keep her family legacy alive.

Yaykal noted that she was the first person to open a commercial Beledi weaving workshop, and she emphasized the importance of its registration for a geographical indication certificate obtained last year, through which it has become a brand for Tire.

“This is a very important event for us in the marketing process,” Yaykal told Anadolu Agency (AA). “Now, when people think of Beledi weaving, only the Tire district of Izmir will come to mind.”

“In this way we create new products by blending together what the new generation expects without compromising the originality of the traditional weaving.”