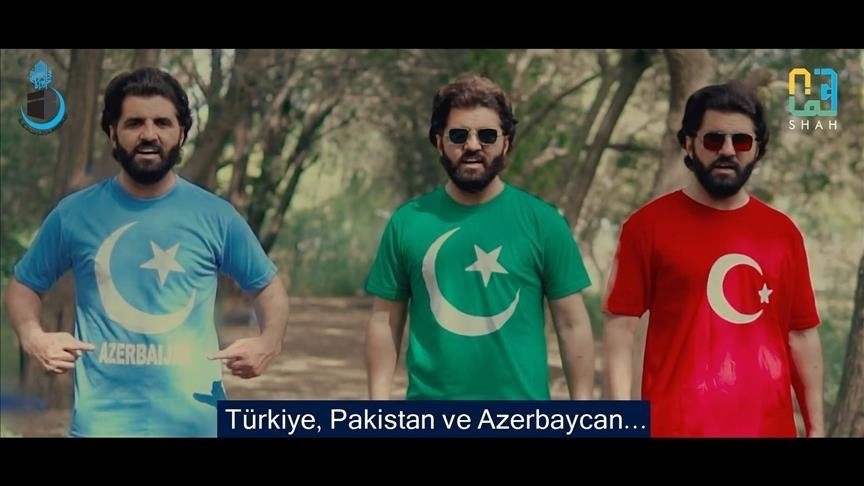 Pakistani artist Noman Shah Bukhari has composed a new song titled “Saltanat e Usmania” to strengthen the cultural ties and friendly relationships between Turkey, Pakistan and Azerbaijan. He shared the song in the Turkish and Urdu languages on YouTube after the success of his first music video in which he performed the theme song of the hit Turkish TV series “Diriliş Ertuğrul” (“Resurrection: Ertuğrul”).

Bukhari told Anadolu Agency (AA) in an interview that after getting over a million likes on his first video, he composed a song to promote the strong relations and cultural ties between Turkey, Azerbaijan and Pakistan. He stressed that Turkey and Pakistan have had very strong relations since the beginning and noted that the two countries were the first to recognize Azerbaijan's independence. "Therefore, after Azerbaijan's independence, these three countries now have very strong ties.

"It took about two weeks for me and my team to come up with the song and the video. The concept was not very difficult to come up with since we have a huge love for these countries," he said. "Honestly, the costumes were very difficult to make. Before 'Saltanat e Usmania,' I had made a video for the theme song of ‘Resurrection: Ertuğrul,’ as it was very famous in Pakistan and the costumes in the series were my main inspiration. I bought all the materials from Pakistan and brought them together. It was not an easy process. I tried my best. I made the flags, the costumes, and brought together the environment," Bukhari added.

Bukhari stressed that he wants to make more music videos serving similar causes. "My aim while making this video was only to meet Turkish President Recep Tayyip Erdoğan and nothing else. I also had dreams of the moment I would meet him. He is the popular leader of all Muslims. We have some hopes from him, and I want to play my part in this noble cause which the Turkish president is doing," he said.

The video, filmed in the Pakistani city of Karachi, also features images of the Turkish president and Pakistani Prime Minister Imran Khan, along with snippets from popular historical Turkish dramas.

Bukhari said that he traveled to Turkey in 2018, where his Turkish friends helped him advance his proficiency in Turkish through singing. "Since it was difficult for me, my Turkish friend helped me with pronouncing the words and singing it. I also traveled to the historical places in Istanbul. As I am in the U.K. right now, after Ramadan I have plans to come to Turkey for a few days to travel to the historical places and see where the Turkish dramas were shot," he said.

Bukhari also expressed his hopes that Turkish TV channels would play his music video for the Turkish public's enjoyment as well as feedback.