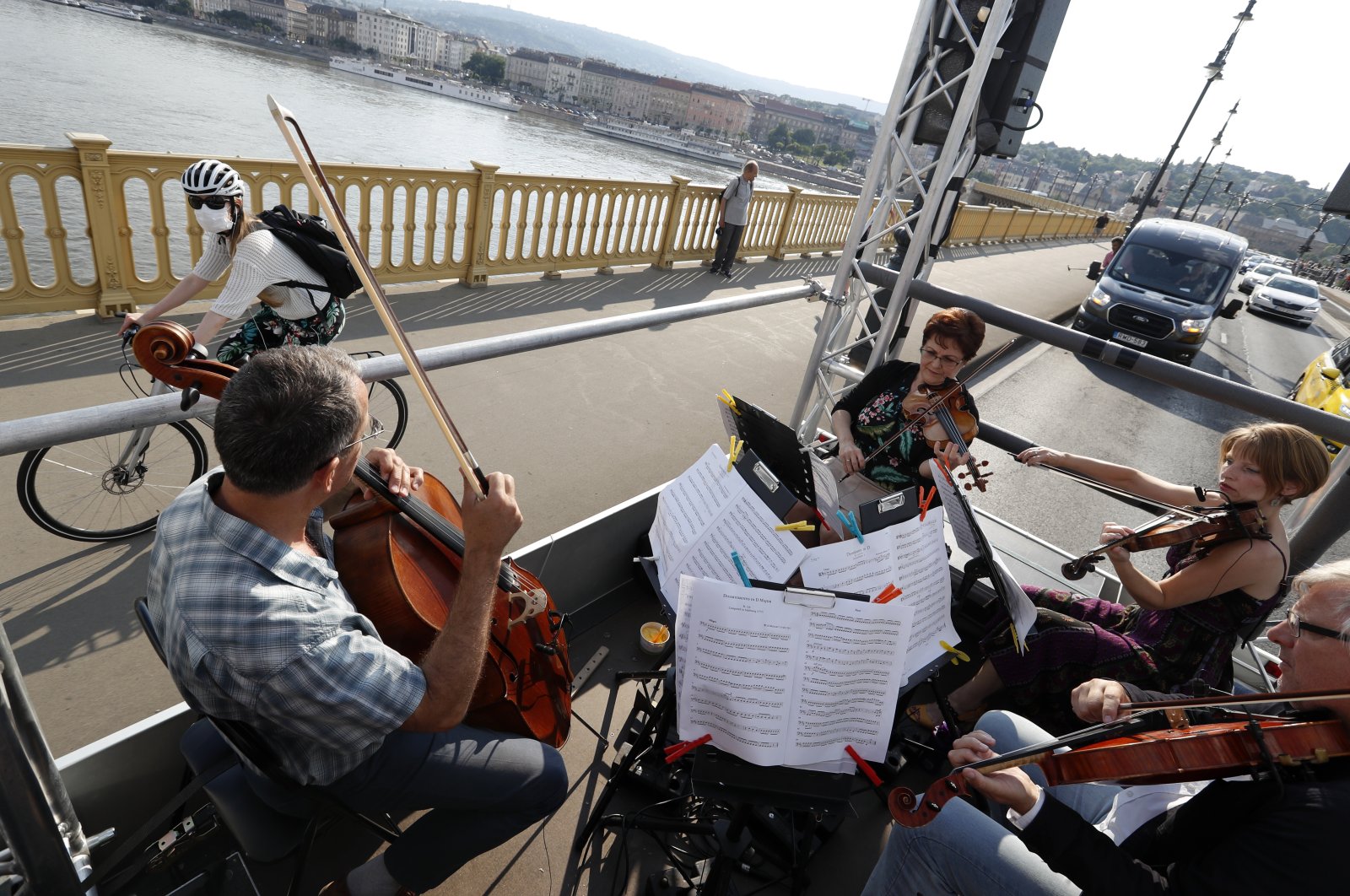 Members of the Budapest Festival Orchestra play music on the back of a truck while driving through downtown Budapest, Hungary, June 9, 2021. (AP Photo)
by ASSOCIATED PRESS Jun 11, 2021 12:29 pm
RECOMMENDED

As most events are canceled across the planet due to the COVID-19 pandemic, the Budapest Festival Orchestra wants its audience back.

The prestigious orchestra, led by renowned composer Ivan Fischer, took to the streets with that message: Five members of the orchestra performed classical music to motorists and passersby from a truck in the afternoon traffic in the Hungarian capital Wednesday.

The musical parade was aimed at encouraging Hungarians to start returning to live performances in concert halls as the pandemic wanes, after more than a year in which people were homebound and forced to take in their culture online.

“I believe that live concerts are very important," Fischer said. "I think especially now that everyone is fed up with their computers and phones, people will throw them away. They will be back to socializing, getting to know each other, hugging, and talking."

Wednesday's performance on the truck was also a celebration of the orchestra's reunion with music lovers amid an easing of government-imposed lockdown measures to fight the virus. The pandemic hit Hungary particularly hard in the spring, making it for a time the country with the most virus deaths per capita in the world. But the numbers of new infections have now plummeted amid one of the European Union's fastest vaccination campaigns.

The five musicians played Schubert, Mozart and Dvorak as the truck carried them over the Chain Bridge spanning the Danube River and past St. Stephen’s Basilica and other stunning city landmarks.

People on the streets stopped to enjoy the impromptu concert, applauding at the end of pieces. Children clapped to the music while adults pulled out phones to film the performance.

Violinist Noemi Molnar said performing on the truck was a new and strange experience for the musicians.

"It was surprising that after we sat down and got settled, the truck started to move underneath us. We’ve never had this kind of experience before. It is new for all the musicians,” she said.

The Budapest Festival Orchestra has become one of Europe’s leading ensembles under Fischer, who co-founded it in 1983 with the late pianist and composer Zoltan Kocsis.

After a year of lockdown, the orchestra is now selling tickets as it resumes concerts with audiences at limited capacity, while its regular 2021-22 season opens on Sept. 9.

“My message to music fans is not to be afraid," Orsolya Erdodi, the orchestra's managing director said. "We will do everything we can to make them feel safe in the future. Vaccination is the key to safety in concert halls.”

Maria Gal Tamasi, first violinist, said: “Music moves us forward, music connects us. Now as the audience can return to our concerts, I really hope that their hearts will beat in time with ours.”