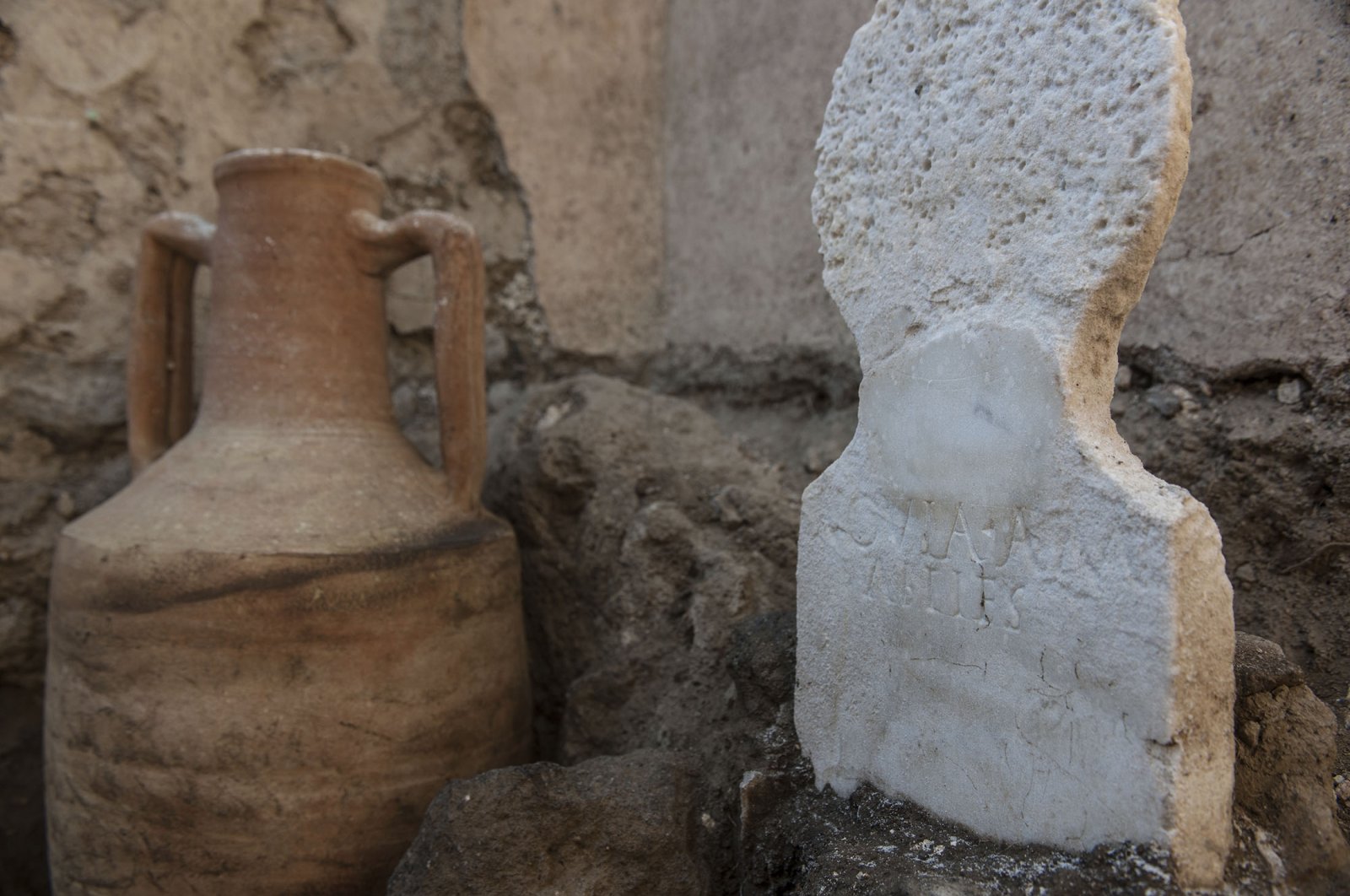 Some of the findings in the necropolis of Porta Sarno can be seen in an area not yet open to the public in the east of Pompeii’s urban center, Pompeii, Italy. (Pompeii Archeological Park via AP)
by Reuters Aug 17, 2021 3:20 pm
RECOMMENDED

Archaeologists have unearthed a remarkably well-preserved skeleton, which still retains some of its features, at a burial site in the city of Pompeii, offering an opportunity of shedding unprecedented new light on funeral rites and cultural activity in the doomed, ancient Roman city, officials revealed Tuesday.

The body of the man, believed to be in his 60s, was found in a tomb that dated to the final decades of Pompeii, before it was destroyed by the Vesuvius volcano in 79 A.D.

A commemorative inscription named the man Marcus Venerius Secundio and made a reference to theater performances at Pompeii in Greek – the first time archaeologists have found direct evidence of plays performed there in Greek as well as in Latin.

"Those performances in Greek were organized is evidence of the lively and open cultural climate which characterized ancient Pompeii," said Gabriel Zuchtriegel, director of Pompeii's Archaeological Park.

The park said in a statement that it was one of the best-preserved skeletons ever found at the site and showed signs of partial mummification, with hair and an ear still evident on the skull. Two cremation urns were also found in the tomb enclosure.

Adults were normally cremated in the city at the time, so the burial of Marcus Venerius is seen as highly unusual.

Archaeologists are investigating whether the man might have been embalmed ahead of burial. Certain textiles are known to have been used in embalming and archaeologists have found fragments of what might be fabric at the site.

Marcus Venerius's name appears in another city archive, which identified him as a public slave and a custodian of the Temple of Venus. He was later freed and his imposing tomb suggests he had reached a certain social and economic status before his death.

The burial site is not currently accessible to visitors and lies beyond the city limits. Pompeii officials said they were looking into how they could open the area to the public.

Pompeii, 23 kilometers (14 miles) southeast of Naples, was home to about 13,000 people when the volcanic eruption buried it under ash, pumice pebbles and dust, freezing it in time.

The site was not discovered until the 16th century and organized excavations began around 1750.

A recent burst of archaeological activity, aimed at halting years of decay and neglect, has enabled scholars to uncover areas that have previously remained buried under volcanic debris.