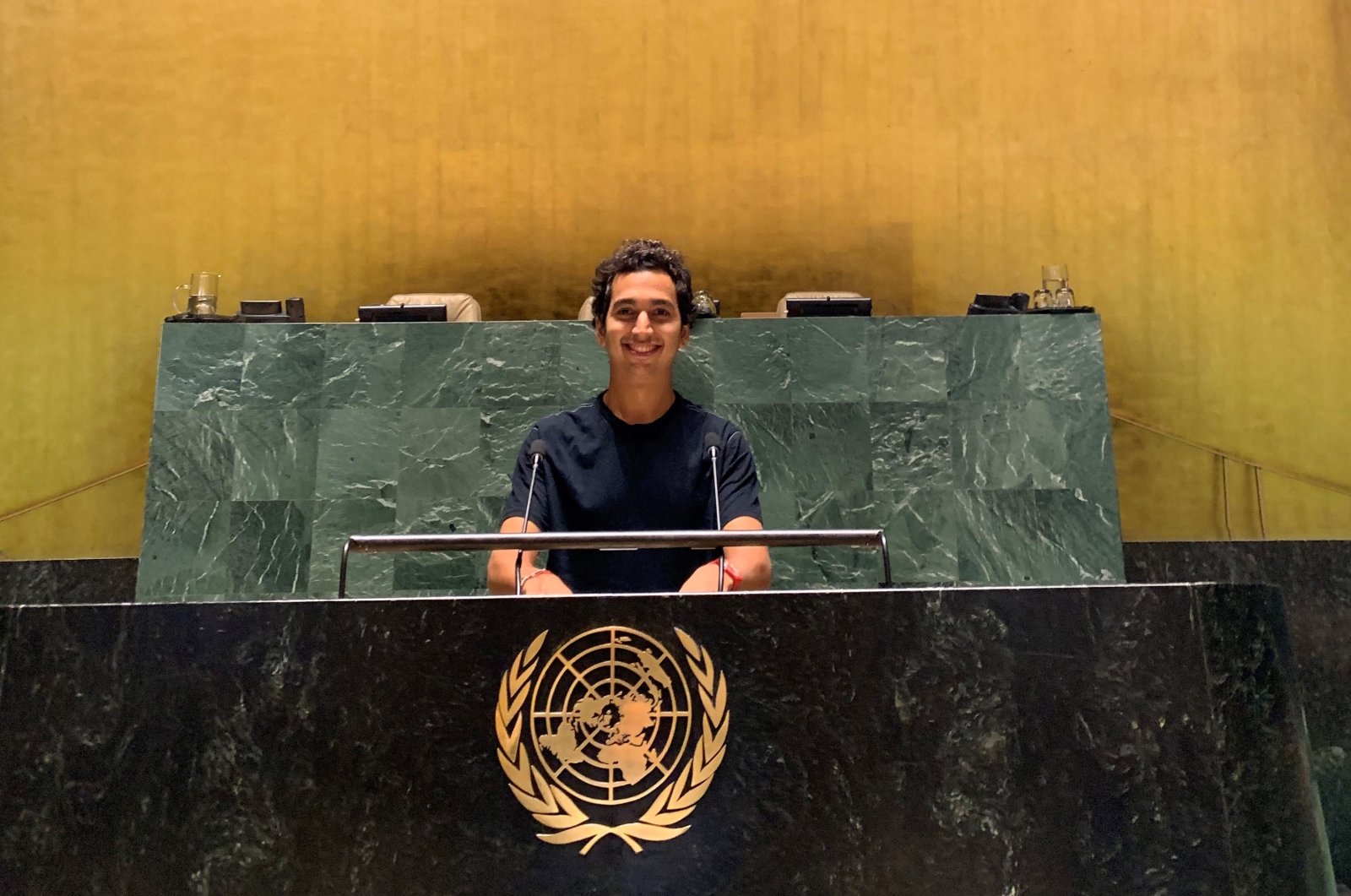 A photo of Can Remzi Ergen from their rehearsals in the United Nations’ building in Geneva.
by İREM YAŞAR Aug 03, 2020 9:06 am

The U.N. building in Geneva will open its doors to 'Spoonface,' performed by Turkish actors Ali Poyrazoğlu and Can Remzi Ergen, on World Peace Day

Sometimes a small event, a work of art or a life story can inspire us, unexpectedly change our perspective on life, help us find the meaning of life or create our own meaning. “Spoonface,” an award-winning play by British playwright Lee Hall, who also wrote the screenplay of the movie “Billy Elliot,” is such a work. Depicting the value of life through the eyes of an autistic child diagnosed with cancer, the play is a portrayal of human diversity. The story of this child with autism has the power to touch the heart of anyone living anywhere in the world.

Hall’s great work will be performed by Turkish actors Ali Poyrazoğlu and Can Remzi Ergen at the United Nations’ building in Geneva on Sept. 21, World Peace Day. The actors, who decided to grace the stage with this play upon the invitation of Iraqi princess Nisreen El-Hashemite, will perform it in three languages – English, French and Turkish.

According to Ergen, who plays the main character named Spoonface, the play attests to how life is worth living despite all the negativities and inanity through the eyes of a child. His character seeks an answer to questions about our existence in this world. This was what drew Ergen's attention most to the play, as someone who continually faces questions about his life.

During my videoconference interview with Ergen, I had the chance to witness his excitement about the play. Poyrazoğlu and Ergen had been rehearsing the play for more than a year. While talking to Ergen, one can clearly feel his high energy and potential. I was curious about how he and the famous actor Poyrazoğlu ended up performing such a great work together. Then, I discovered that Ergen is a young and talented actor and, on top of that, he received decent training in acting.

Ergen was born in 1991 in Istanbul to a mother who runs a family-owned textile company with her siblings and a graphic designer father. He thinks that his father gave his artistic side, which led him to pursue a career in theater, and his mother gave him a more technical and strategic point of view. However, he spent a big part of his life with his grandmother as both of his parents worked outside the home. According to him, his grandmother showed him pure love and that softness toward life is a strength, which bolstered his ability to get into character, in line with my own observation.

Ergen says that having a career in theater was not a conscious choice for him. “When I was little, I would set up a stage on my bed at home and perform plays for my family, which was followed by drama club at school and high school theater festivals we attended in different parts of the world. Then I studied theatre in different countries throughout my university education and eventually performed plays professionally. It is actually what makes me feel my existence. I felt like I had to do it, and I found myself in the theater," he said.

“Trying to create a character as if you are making a sculpture, finding that character within yourself, discovering your real self more through characters, using your senses better, and defending the rights of those characters are of interest to me in theater," Ergen said.

"However, the most significant thing is to touch people. There is nothing more beautiful in the world than being able to make a person feel something. Theater is not just a mirror to yourself through someone else or vice versa. It is a mirror to humanity through you. It is an instrument of peace. Perhaps the biggest reason for conflicts today is that people do not hear and understand each other. Theatre tells people about people and makes them feel empathy," he explained.

The Best Actor award at a high school theater festival helped Ergen get in to Bordeaux Academy in France. He then took art and fashion classes from schools such as the New School Parsons, School of Visual Arts, Fashion Technology Institute (FIT) and International Center of Photography. Ergen had an opportunity to work closely for a long time with Elizabeth Kemp, an actress and admired teacher at the Actors Studio, and with American acting teacher and actor Eric Morris. He attended Shakespeare and Meisner classes at the Royal Academy of Dramatic Arts and gained a Vogue diploma from Conde Nast School of Fashion and Design in London. Later, he started a master's program in Performing and Visual Arts at Sorbonne University in Paris. Ergen has also been producing various content for Vogue and GQ magazines and working as a communications officer at the United Nations Children's Fund (UNICEF) alongside his acting career. “Although everything seems separate, I think they are all very connected and feed each other," he said.

I was not surprised when I learned about his prolific career as I had previously understood that learning something new is one of the things that excites him most in life. Naturally, Poyrazoğlu’s offer to perform the play with Ergen is quite understandable.

When it comes to the play, it is important for the duo that this work carries messages for everyone regardless of their religion, ethnicity or gender. Although the story reminds us that the meaning of life is actually created by us, it also conveys that diversity brings richness rather than separation. The play is a serious warning to ensure that individuals face their own differences and confidently deal with life. As the actors aim to raise awareness for the marginalization in the world with “Spoonface,” they plan to perform it in various places around the world after the premiere.

Noting that he has learned many things from Poyrazoğlu during their rehearsals, Ergen was reminded of a remark by the actor: “The issue of marginalization in the world has turned into a disease that is not very different from the current coronavirus pandemic and that even spreads faster than some germs.” Mentioning that his character in the play wants to break taboos about marginalization, Ergen implied that the play attests to the value of life and of every human being from a very real place with a very literary language through Spoonface's experiences.

While trying to portray a child with autism through his character, Ergen also gained a lot more awareness about autism himself. As he started to work with children and understand a little bit more about what autism means, it became a new issue for him to defend.

Therefore, he hopes the play will be an important step to change both the perspective on autism and the marginalization of other people, as it was for him. “We are all human despite our difference, and life is beautiful even though there are many things in which we must make compromises," he said, reflecting the message of "Spoonface."