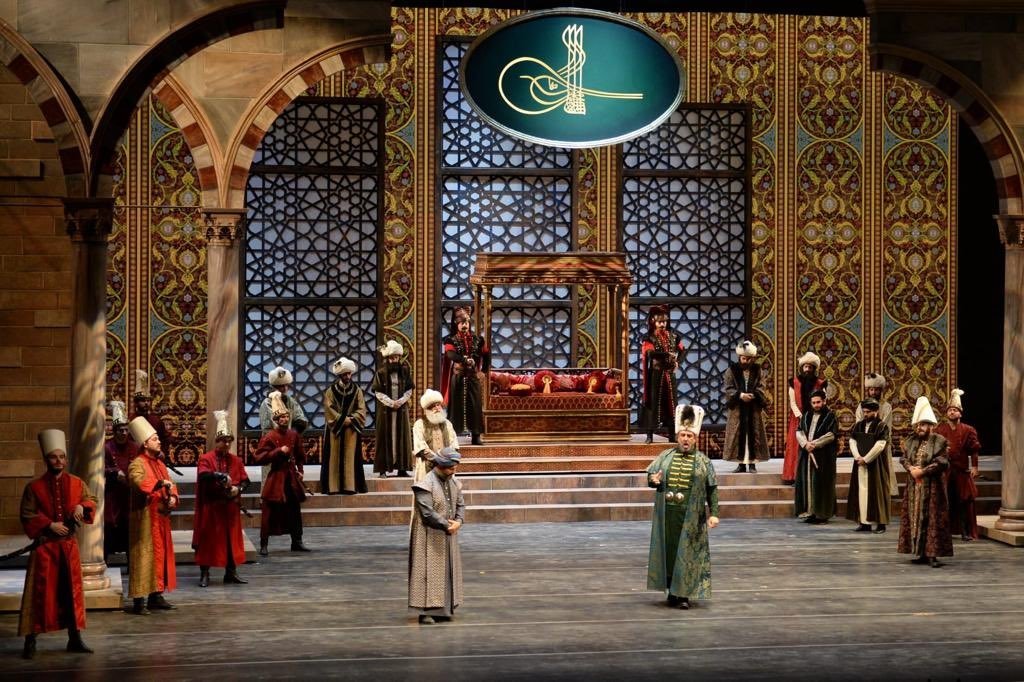 The Atatürk Cultural Center (AKM), one of the landmarks of Istanbul's Taksim Square, opened the doors of its new building to the public late Friday, on the 98th anniversary of the foundation of the Republic of Turkey, following two years of reconstruction work. Upon the request of President Recep Tayyip Erdoğan, a new opera based on the life of famed Ottoman architect Mimar Sinan was specially prepared for the inauguration of the AKM to be presented to art enthusiasts on Oct. 29 and 30 in two shows.

I had a chance to attend the second performance of “Sinan” in the mesmerizing atmosphere of AKM’s brand-new opera hall, which is shaped like a giant, elegant red sphere on the outside. Indeed, the rotating stairs on the right and the massive sphere housing the large opera hall with a capacity of 2,040 people are the two elements that catch the eye from the first moment you step into the new AKM.

In the enthralling ambiance of the opera hall, “Sinan” portrayed a glorious period from the Ottoman Empire, blending it with the story of the 16th-century architecture genius Mimar Sinan.

Born in 1490, Mimar Sinan was brought to Istanbul as a devshirme (a system that trained non-Muslim citizens of the empire to be officers of the state) in the time of Sultan Selim I, also known as Selim the Grim (1512-1520). He served as a janissary and then chief architect during the reign of Sultan Süleiman I, commonly known as Suleiman the Magnificent in the West and Suleiman the Lawgiver in his realm. He was also the chief architect during the reigns of sultans Selim II (1566-1574) and Murad III (1574-1595). The great architect undersigned 365 works across the world, including many mosques, madrassas, bridges and palaces. His final masterpiece, Selimiye Mosque, in northwestern Edirne province and the famous Süleymaniye Mosque in Istanbul are among his well-known works.

Opening with a small performance of Ottoman janissaries, "Sinan" goes on to tell the story of how Sinan earned the appreciation of Sultan Suleiman with the bridge he built in 13 days on the Prut River in the Moldavia (Kara Buğdan) and was promoted to chief architect. While we see the friendship that developed between the sultan and the chief architect afterward, the stories and events behind Sinan's valuable works in Istanbul, including Şehzade Mosque, Mihrimah Sultan Mosque and most importantly Süleymaniye Mosque, are told in operatic style to the viewers.

The artists of the State Opera and Ballet received a standing ovation from the audience for both of their performances. The stage design successfully implemented many architectural elements and utilized various screening methods, while the performers' costumes perfectly reflected the tone of the period.

Based on Turkish writer and film director Halit Refiğ's screenplay "Koca Sinan,” the libretto of “Sinan” was written by Bertan Rona. Conductor Gürer Aykal directed the orchestra of the two-act opera, composed by Hasan Uçarsu, one of the leading composers in Turkey.

While the fascinating "Sinan" opera is set to grace audiences again in two months, it will also meet spectators on the world stage as well. It seems like this exceptional work of art is set to continue to conquer the hearts of audiences with its upcoming performances too.