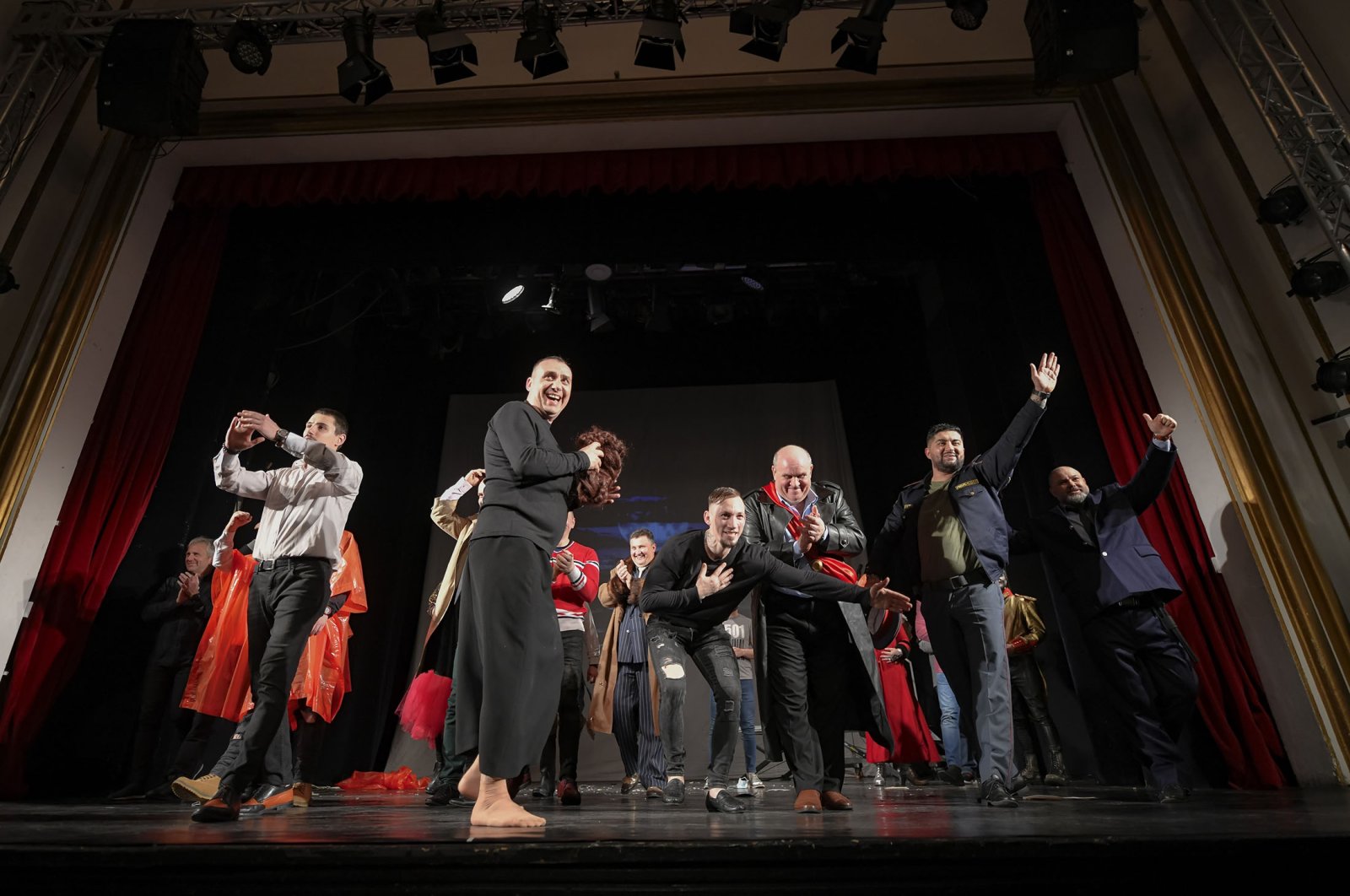 Inmates salute the public after performing in the “State of Siege,” by French author Albert Camus, a play describing a totalitarian Spanish regime during the plague, at the Nottara Theater in Bucharest, Romania, Nov. 24, 2021. (AP Photo)
by Associated Press Dec 03, 2021 12:54 pm
RECOMMENDED

Most people dream of making it big on stage, thinking they could become a star if they just had a chance to shine. On the main stage of the Nottara Theater in downtown Bucharest, some of those dreams have been coming true – for inmates at least – as hundreds of prison inmates have gotten that lucky break to get a chance to perform on a stage that entices every aspiring artist in Romania.

A drama festival organized by the National Penitentiary Administration of Romania gives prisoners the opportunity to appear in theater productions overseen by professional directors. The Multiart festival was organized to combat stereotypes about people serving time in the penal system and to offer them a route to reintegration.

While participation doesn’t guarantee a shorter sentence or other privileges, it can be a step in that direction. Inmates selected for the performances earn bonus points, which they can apply toward extra visitors or faster access to parole.

The festival, which runs under the motto “Liberation Through Culture,” debuted in 2009 and has taken place every year except 2020, when it was canceled because of the COVID-19 pandemic. Over the years, more than 700 inmates have performed in over 70 plays, both professional works and ones penned by prisoners.

“We all have prejudices, more than we are willing to accept. I must convince the society that these people exist here, they don’t live on the moon. For them, theater is a form of freedom.” Dana Cenusa, the National Penitentiary Administration spokesperson who created Multiart, told Romanian media in 2010. Cenusa died in 2015.

Preparation for the performances usually takes up to six months and starts with selecting inmates as actors. Trial runs take place at prisons or in smaller cities. The productions picked for the festival lineup are performed at the Nottara Theatre in the fall.

“We are all now facing very tough moments in our lifetimes, because of the pandemic. Performing in the play offered us a change,” said Marin Florin, an inmate at Jilava Prison on the outskirts of Bucharest who appeared in “Anyone Can Make Mistakes” by Romanian author Mircea Rotaru.

The other play staged this year was an adaptation of French author Albert Camus' “State of Siege,” which depicts the arrival of a plague that brings a totalitarian regime to power in Spain. Rehearsals were compressed to about four weeks this year because of pandemic restrictions.

During a final dress rehearsal at the Nottara, the actors became visibly excited at the sight of a cellphone or a pen on a chair, items forbidden in prison. Relatives, officials and other spectators made up the audience for the free shows.

“The transformation is a gradual process; the inmates will realize in five to six months that this exercise they did in this period will change them,” said Iulian Glita, a festival veteran who directed the Camus play.

“The aim is to prevent them from returning to their old habits. This, however, is entirely up to them.”