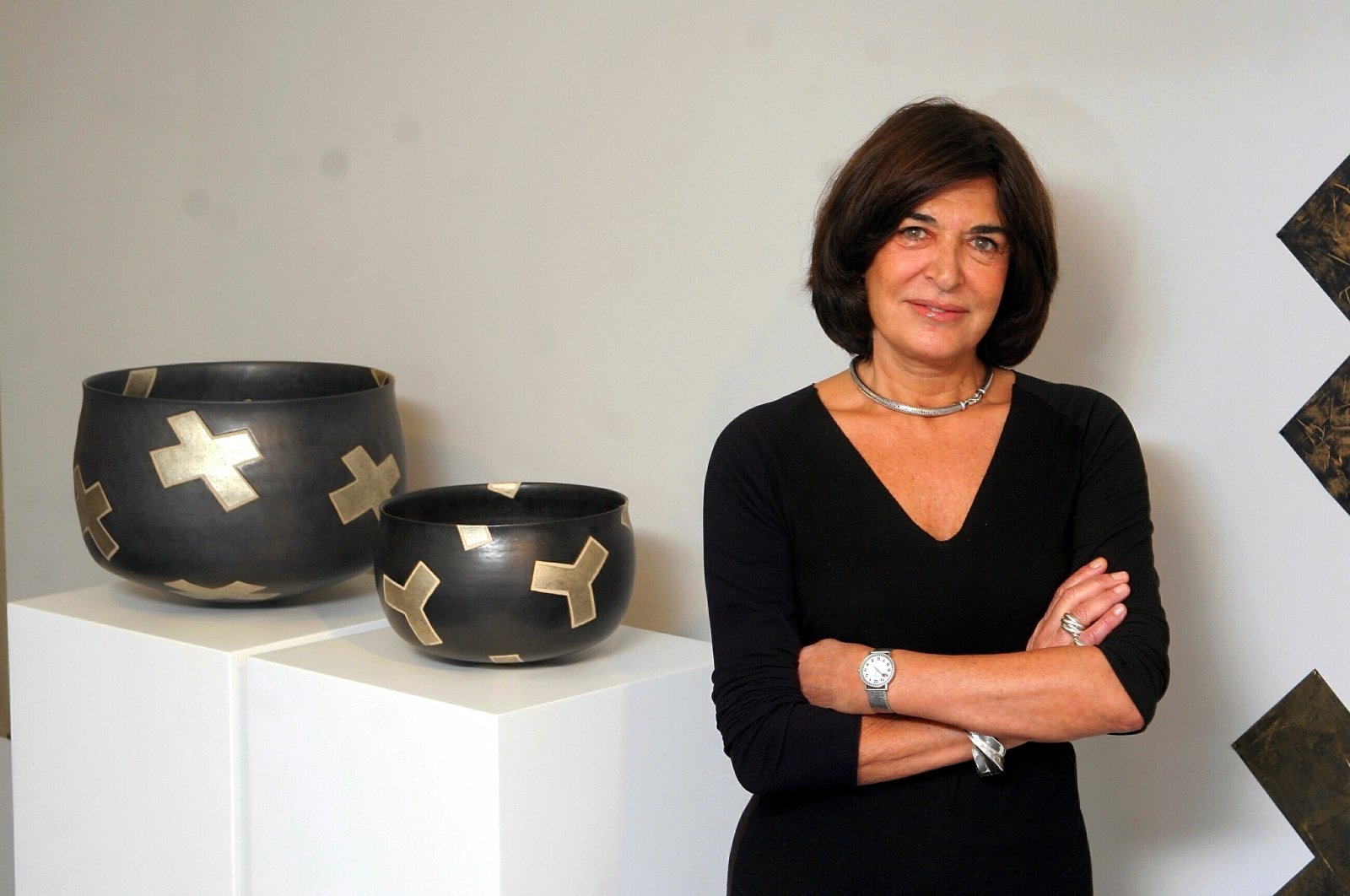 Alev Ebuziyya Siesbye poses with two of her ceramic works at one of her previous exhibitions at Gallery Nev in Istanbul, Turkey. (Sabah Photo)
by Hakan Arslanbenzer Apr 09, 2021 10:53 am

Known for both her small vessels that are aesthetically unique and preferred glaze colors, Siesbye is the first female Turkish ceramic artist to achieve international fame through her groundbreaking techniques

Often described as a minimalist, Turkish ceramic artist Alev Ebuziyya Siesbye produces vessels glazed in saturated pigments and adorned with delicate detailing around the mouth. These works look less like modern artworks than they do ancient artifacts. The simple design lends her pieces a unique, timeless quality.

The artist was born on Aug. 30, 1938, in Istanbul to a notable family committed to Turkish modernization. The “Ebuzziyas” raised many artists, journalists and publishers including Ebuzziya Tevfik and Ziyad Ebuzziya, who are Siesbye’s great-grandfather and father. Though the family was named after Ebuzziya Tevfik, a publisher and a member of the reformist Young Ottomans association of the 19th century, her family's roots date back to the 12th century. Ebuzziya Tevfik was a friend of the great 19th-century author Namık Kemal. He wrote columns at various newspapers before he established his own print house, known as the “Matbaa-i Ebuzziya,” which published the first serials of books in Turkey.

Siesbye’s father Ziyad, who was born in 1911, took over the Matbaa-i Ebuzziya in 1933 and published many books and some newspapers. He was a member of Parliament in the early 1950s representing the Democrat Party (DP), but he was dismissed from the party because he participated in the “Movement of 19.” The movement was an in-party opposition that led to the foundation of another political party, the Liberty Party, which gained very little success at the 1957 elections and dissolved in the following year. Ziyad Ebuzziya was also a committed collector of antiques. Siesbye’s mother was Vala Ebuzziya.

Siesbye graduated from high school in the U.K. in 1955, one year before she enrolled at the department of sculpture at the State Fine Arts Academy in Istanbul, which today is Mimar Sinan Fine Arts University (MSGSÜ). She attended the Füreya Koral ceramic workshop and later visited Germany in 1958 and continued her education at the Höhr-Grenzhausen factory, where she studied the synthesis of ceramic clay.

In 1960, Siesbye returned to Istanbul and worked at the Eczacıbaşı Art Studio as a designer for two years before she moved to Denmark in order to work for Royal Copenhagen, Denmark’s royal porcelain factory. She founded her personal studio in Copenhagen in 1969 and debuted her first solo exhibition in 1971 at Galerie Birkdam. She married David Oscar Siesbye in 1967, and the couple remained married until 1979.

Siesbye gradually gained an international reputation after she settled in Denmark and began to work as a potter. She has had an extensive career in commercial ceramic production. She created special designs for the German Rosenthal Factory from 1975 to 1990 and for the Royal Copenhagen factory from 1984 to 2000.

Siesbye was elected as a member of the Royal Danish Academy in 1981 and the Royal Court of Denmark awarded her with the Knight of Dannebrogordenen (2000), the most prestigious honor given by the Danish Court. The year 1981 was a very one for Siesbye as her works were shown at a retrospective at the Kunstforeningen exhibition space in Copenhagen and at a series of museums, art galleries and events all around the world. She also participated in Turkish and Danish initiatives, namely the “Turkish Paintings and Ceramics” exhibition at the UNESCO facilities in Paris and “Danish Ceramic Design” at the Palmer Museum of the State University of Pennsylvania.

In 1982, Siesbye was awarded the Tagea Brandts Rejselegat, a Danish travel scholarship given to women who have made a significant contribution in art, literature and science. In 1983, she received the Eckersberg Medal, the annual prize given by the Danish Royal Academy of Fine Arts. Siesbye’s honors and awards include the Sanat Kurumu Foundation ceramic prize from Turkey (1988), Prince Eugene Medal from Sweden (1995), Knight of Dannebrogordonen from Denmark (2000) and Ordre des Arts et des Lettres from France (2009).

In 1987, the artist moved to Paris, where she still lives. The move helped propel her reputation given that the city is considered an epicenter of arts.

Siesbye is known for her unique bowls made through high-temperature firing. Her work is sometimes defined as minimalist, with some critics arguing that her bowls resemble ancient pottery rather than modern art. She uses the oldest ceramic technique of coiling and a wooden-kick wheel, which helps her put her signature touches on every piece she produces. Her technique is what makes the robust bowls so unique. She says that she is only able to produce 20 to 25 bowls a year, saying “It’s the work that determines the final date, not you.”

Siesbye’s ceramic bowls are stone-like in solidity because of the high temperatures in which they were produced. She uses very small bases, which the bowls' shadow hides, to give the appearance that they do not have bases.

Siesbye's works were recently exhibited at Arter Gallery in Istanbul in late 2020 in a show entitled "Repetition." A borrowing from Soren Kierkegaard’s book “Repetition,” the exhibition’s title implies continuous repetitions in arts and crafts with slight changes. The title and the works exhibited show Siesbye’s commitment to producing the best possible version of her craft in a limited medium like pottery.