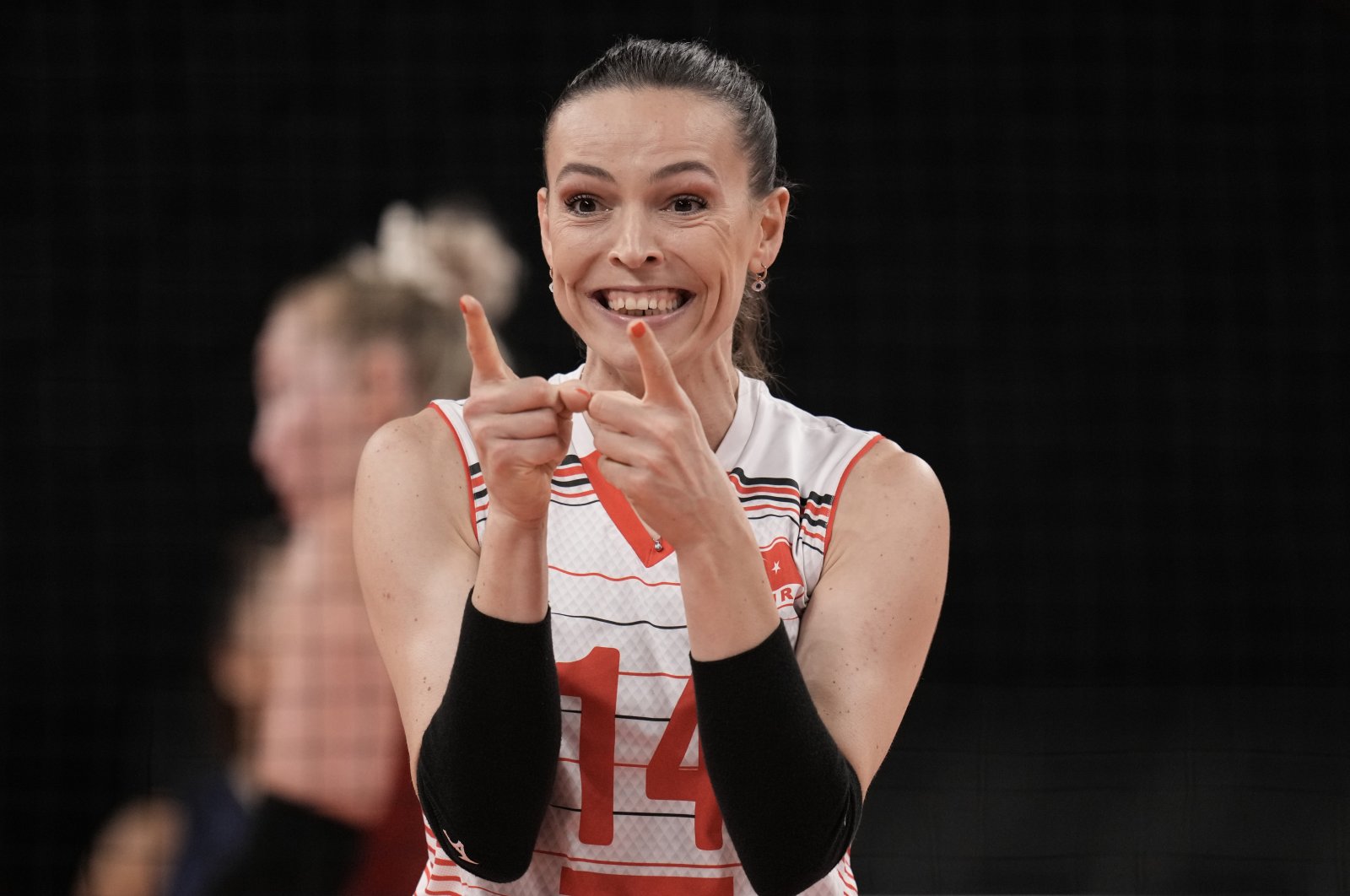 Eda Erdem Dündar, captain of the Turkish national volleyball team, had her name written in gold letters as one of the best middle blockers thanks to her success in many matches including the 2021 CEV Women's European Volleyball Championship

Turkey has always struggled to succeed in team sports. Though Turkish athletes have often climbed to the top through personal achievements, Turkish teams – at national or club-level – have collected fewer trophies than expected.

Football, for instance, has been a national pastime for more than a century; however, the only high-level success Turkish teams have to boast of is Galatasaray’s UEFA Cup win. On the other hand, the national team won a bronze medal at the 2002 World Cup, and secured third place at the Euro 2008, which is not awarded with a medal. Fenerbahçe managed to survive until the semifinals of the Europa League of the 2012-2013 season. Both Galatasaray and Fenerbahçe’s best accomplishments in the Champions League were reaching the quarterfinals, from which the former was eliminated three times and Fenerbahçe once.

However, Turkey’s club-level international record in basketball is better. Fenerbahçe and Anadolu Efes won the EuroLeague once each. Galatasaray won EuroLeague Women while Fenerbahçe lost at three separate finals at the same organization, managing to take second place. Turkish teams, both men and women, won other titles including the EuroCup, FIBA Korac Cup and FIBA EuroChallenge among others.

The history of volleyball differs from many other team sports in the fact that it was the invention of a single person. In 1895, William G. Morgan, physical director of the Young Men’s Christian Association (YMCA) in Holyoke, Massachusetts, invented a game he referred to as “Mintonette” for young businesspeople, only four years after the invention of the game basketball. Morgan designed volleyball as a combination of basketball, tennis, handball and baseball. Initially, volleyball didn’t feature concepts like spiking or blocking, which are considered essentials of the game today.

Spread from Holyoke, Massachusetts by the YMCA missionaries, the game of volleyball first reached the Philippines, where it was enhanced with many innovations including the first-ever spike, before spreading further east to countries like Japan and Korea. It’s an interesting point that it was the American soldiers of WWII that brought volleyball to Europe, after which Soviet Russians dominated the game until the mid-1980s.

In the Turkish context, the game of volleyball was introduced by the YMCA, too; but it was spread through Istanbul's prominent high schools such as Kabataş, Pertevniyal, Galatasaray, Istanbul, Istiklal, Vefa and Haydarpaşa schools, especially through matches held amongst each other. Selim Sırrı Tarcan, the founder of the Turkish Olympic Committee, learned the game from the YMCA and taught it to the physical education instructors at the Erkek Muallim Mektebi (School for Male Teachers). Meanwhile, Istanbul Technical University (ITÜ) also took to volleyball early on in Turkey, until the end of WWII when inter-city club-level championships began to be held. However, there were fewer volleyball clubs in big cities such as Istanbul and Ankara until an unofficial national team made up of amateur volleyball players from universities played against the Greek (1946) and Egyptian (1952) teams. At that time, Turkish volleyball was at a basic level and players didn’t know the contemporary rules and tactics.

The first time the Turkish men's national volleyball team officially attended an international championship was at the 1956 World Championship held in Paris, where the team finished in 22nd place. At the club level, the Altıyurt club contributed much to Turkish volleyball in the 1970s. Football-based clubs such as Galatasaray and Fenerbahçe also made an early investment in the so-called “amateur branches,” including volleyball, beginning in the late 1960s.

However, the real factor that made volleyball popular in Turkey, especially among women, is the Eczacıbaşı sports club for basketball and volleyball, founded by Eczacıbaşı Holding. Eczacıbaşı’s sponsorship helped build a professional team that served as the basis of the national team, particularly the women's team. In 1977, the young Turkish women’s national team beat Belgium, Italy and Spain and won a four-team tournament, which was a real milestone for women’s volleyball in Turkey. After that, Eczacıbaşı led to the creation of the Turkish volleyball leagues for both men’s and women’s teams.

Güneş Sigorta, which became Vakıfbank women’s team later, was the main competitor of triumphant Eczacıbaşı, which won the league title 16 times in Turkey. Vakıfbank won its first league title in 1996 but worked hard at the international level and secured its first-ever European title in 2011. Fenerbahçe had been the favorite to win and managed to find richer sponsors by the year in the 2000s, finally winning its first title in 2008-2009 against giants Eczacıbaşı and Vakıfbank.

The rise of legendary middle blocker

Fenerbahçe's first league title came with a combination of younger Turkish talent, including setter Naz Aydemir (later going by the last name Akyol after getting married), middle blocker Eda Erdem (Dündar after marriage), opposite Seda Tokatlıoğlu (Aslanyürek after marriage), along with international names like Marina Tumas from Belarus, Oksana Gulieva from Azerbaijan and Anja Spasojevic from Serbia. This formula helped Fenerbahçe win many national, European and world titles while carrying Erdem Dündar to the top level in the world of volleyball.

Erdem Dündar was born Eda Erdem on June 22, 1987, in Istanbul. She began playing volleyball in 2000 in Beşiktaş’s junior team. She was only 16 when she began to play for Beşiktaş’s senior women’s team. She left Beşiktaş in 2008 for a bigger team, Fenerbahçe, where she contributed to the club’s first-ever national title in her first season. Individually, she was awarded the title of best middle blocker while playing for Beşiktaş. But the 2008-2009 title was just her first team win, the first of many.

Erdem Dündar was already considered one of the biggest young talents in European volleyball when she arrived to Fenerbahçe. She appeared at under-19 tournaments at the European level before she played at the CEV Cup with Fenerbahçe in the 2008-2009 season, when they took third place. But the team was preparing for a bigger win, the CEV Champions League. They were very close to achieving that dream when they lost the 2010 final to the Italian giant Volley Bergamo.

Now everybody, including those not interested in volleyball, knew the name “Eda Erdem,” as enthusiastic match commentators described “Eda spiking from the corner, yes well done.” Normally, middle blockers attack from the middle with short passes from the setter, however, Eda is better at corner attacks, where she jumps on a single foot and spikes to the cross line – a move very hard to block and receive by the rival team. Erdem Dündar is the queen of corner attacks with no exaggeration.

Erdem Dündar has been the captain of both Fenerbahçe and the women’s national team for a while. She was one of the architects of the national team’s rise throughout the 2010s. The national team took second place at the 2019 Euro Volleyball Women’s Tournament and third place at the 2021 tournament. Erdem Dündar has been selected as the best middle-blocker for the latest four consecutive Euro Volley tournaments. She has also received a Most Valuable Player (MVP) title in the Turkish league and numerous other titles and awards at the international level.

Erdem Dündar is known for her resistant and emotional playing style with surprising blocks against the world's best spikers and corner spikes against the cruelest blockers. She is now 34 years old and has been married to Erdem Dündar for 10 years. She is the living legend of Turkish volleyball for both the authorities and the volleyball audience of the world.